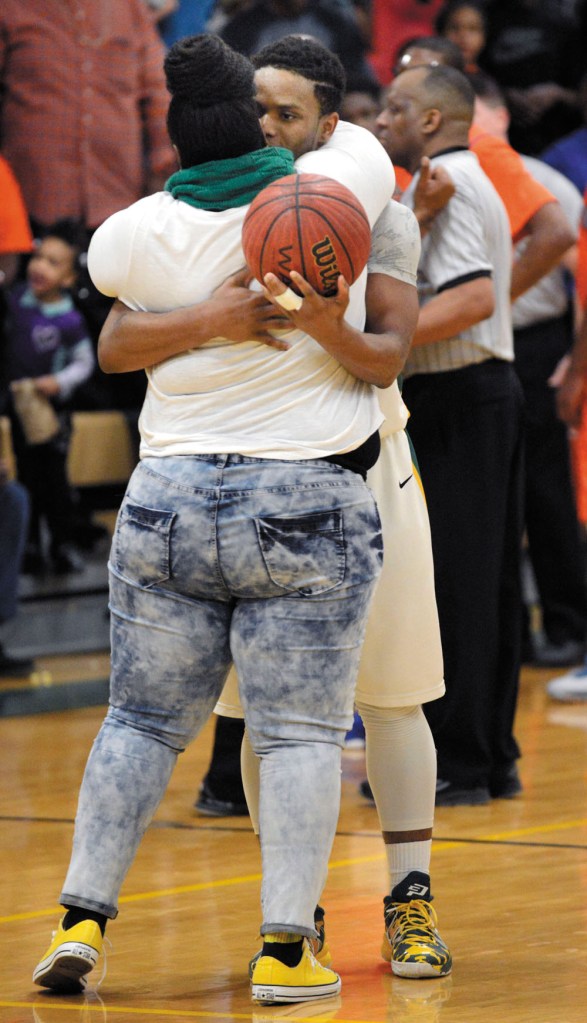 North's Jalen Sanders #2 holding the ball that was presented to him getting a hug and kiss. photo by Wayne Hinshaw, for the Salisbury Post

SPENCER — It was Jalen Sanders’ night, but then again, it wasn’t.

The North Rowan junior scored 29 points to match his career high and tallied the 1,000th point of his career dramatically — a  clutch, game-tying left-wing 3-pointer with 6:36 remaining.

Yet, some of Sanders’ memories from what could’ve been a magical Friday won’t be pleasant. He went 2-for-9 at the free-throw line, he missed a potential game-winner from the right wing, and North Rowan lost 66-64 to visiting Lexington.

“I thought that last shot was in,” Sanders said. “It felt good. It looked good. But then — back iron.”

Resilient Lexington (15-4, 5-1) got 25 points from guard Jakishe Page and moved into a first-place tie in the Central Carolina Conference with the Cavaliers (12-5, 5-1), who won by two at Lexington.

Sanders was mostly awesome, 12-for-18 from the field. After Joseph Scott got the Cavaliers started, Sanders placed them on his back. Sanders scored 14 in the second quarter alone, mostly on tough drives, to push the Cavaliers to a 41-33 halftime lead.

“He’s one of  the best in the state,” Lexington coach Jon Weavil said. “But we did a pretty good job against him. He didn’t get easy points. He had to work.”

The game changed in the second half when the Yellow Jackets were able to establish Nolan Benson (17 points) as an inside force.

“Benson missed chippies in the first half that he ordinarily makes,” Weavil said. “It helped to get him going, but the biggest change was we raised our intensity after halftime. The first half, North Rowan’s intensity was higher. In the second half, we played just as hard as they did.”

Fouls piled up. Lexington had four starters in foul trouble. Sanders got his fourth foul with 2:17 left in the third quarter.  He sat until the fourth quarter began, but then he made that game-tying 3-pointer for 1,000, and it appeared North Rowan might get it done.

The foul line was the deciding factor. Lexington shot 21-for-37 from the stripe, while North Rowan was a dismal 7-for-18.

“They made more free throws than we attempted, and that’s where we lost,” North Rowan coach Andew Mitchell said. “We outshot them and we outrebounded them, won every category except free throws. But when a team is shooting that many more free throws than you, you’ve got to make the ones you get count — and we didn’t.”

Sanders put North Rowan ahead 64-63 with a fierce drive with 55 seconds left, but the Cavaliers wouldn’t score again.

“That’s a play we’d studied all week,” Mitchell said. “But we’re young. We got excited.”

North Rowan was patient on its last possession, but Benson jumped out to block a 3-point try by Henderson Lentz with 3.2 seconds left. Sanders still got a clean look from the left wing as the clock ticked down, but his shot was long by an inch or so.