The Holy Land: The final day 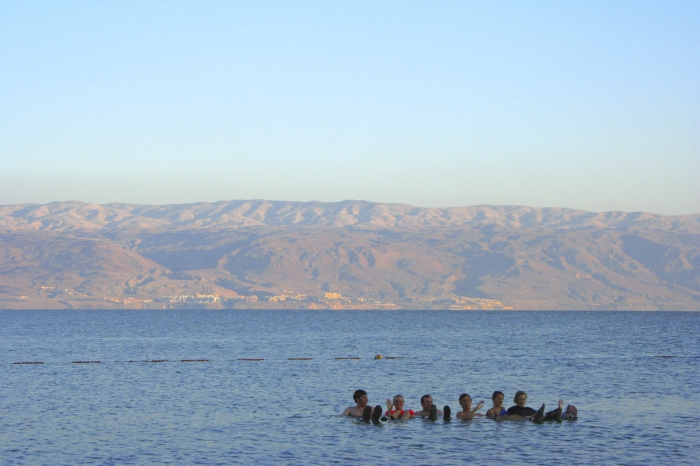 Most of our intrepid seminarians took a dip in the Dead Sea. Those of us on shore had just as much fun watching them.

“And when Jesus had been baptized, just as he came up from the water, suddenly the heavens were opened to him and he saw the Spirit of God descending like a dove and alighting on him. And a voice from heaven said, ‘This is my Son, the Beloved, with whom I am well pleased.”

Sunday was a special day for members of St. John’s. Several of us were with the bishop, but another group had arrived Saturday night with the Bright Stars of Bethlehem fundraising organization. It is a wonderful thing to see familiar faces from 6,000 miles away.

We worshiped together at Christmas Lutheran Church on Manger Square in Bethlehem. Dr. Mitri Raheb and his congregation are mission partners with St. John’s, and it was exciting to visit the city where his small congregation is making such a huge difference in the lives of Christians there.

The bonus was that Bishop Bolick preached. He joked beforehand that some folks might grumble, “We come all the way to Bethlehem and Bolick’s preaching!” But nobody did.

In his sermon, Bishop Bolick agreed with Raheb, who has called the Holy Land the Third Sacrament.

“It must break God’s heart that there is division and war and killing in this holy place,” he said. “If there are issues, you don’t build a wall. Why not build a bridge, so there can be conversation? We pray there can be peace and justice, and bridges of conversation.”

At lunch, Raheb talked about all the programs his church offers through the Diyar outreach ministry, including programs for children and seniors, and the first Lutheran college in the Middle East.

“We want to empower our people to tell their story,” he said. “The Palestinian side of the story is often not told.”

In the afternoon, we visited the Jewish settlement of Efrat, an affluent, upscale community. We’d not encountered such entitlement to this point on the trip, but it became even more clear that the issue of peace in this land is, well, complicated.

The next morning, we set our sails for home as we headed to the airport, but with still several stops to make. We planned to visit Masada, the site of a first-century Jewish uprising. But the recent rain had made the road impassable. On top of that, Dr. Luker had the flu that was going around, and did not accompany us. Fortunately, seminarian Bobby Morris, who was himself leading his own tour in a few days, stepped right in. I have to admit we pilgrims were a little more loosey-goosey getting on and off the bus that day without Dr. Luker ordering us around, but we got along fine. Nobody got left anywhere. (I don’t think.)

We stopped briefly at the site of a sixth-century monastery, St. George’s. We were to make a hike at Wadi Qelt, but the weather had changed that (I was glad). This place — not unlike the Grand Canyon — gave us a sense of what the wilderness was like in the time of Jesus and John the Baptist.

Speaking of John, we made an early stop at the Jordan River for an Affirmation of Baptism service. Bishop Bolick used an olive branch to sprinkle us with water as we sang “On Jordan’s Bank the Baptist’s Cry” — again in perfect four-part harmony. I made a quick video clip for my mother, raised a Baptist, singing the chorus for “Shall We Gather At the River?”

Today, we also visited Qumran, the site of the Dead Sea scrolls. Late in the afternoon, we stopped at the Dead Sea, so our brave seminarians could take a dip. Those of us on shore had almost as fun watching as they did swimming.

We ate dinner together in Tel Aviv before going our separate ways at the airport, Doerte back to Germany, the Klugs on a later flight home.

“Jesus said to Thomas, ‘Have you believed because you have seen me? Blessed are those who have not seen and yet have come to believe.”

Folks have been so kind to inquire about how our trip went. I’ve been saying, “It was a great trip!” or “We really had a good time.” Which we did. But, of course, it was so much more than that. The words “life-changing” and “trip of a lifetime” are cliché, but accurate to describe our pilgrimage. Not only did we see the places where Jesus lived and preached and died and rose from the dead, we came to a better understanding of the divisive issues that still plague that holy land today.

I’ve always been a bleeding-heart liberal, yellow-dog Democrat (even though my conservative friends assure me they still love me). But I hope I am more open-minded when it comes to politics and religion, even sexual preferences. For example, I have gay friends, but until this trip, had never spent much time with them. Getting to know Pastors David Eck and Gary Mitchell was just pure delight. Now I’m sure not all gay couples are as delightful as these two, but I certainly found a respect not just for who they are, but what they do as ministers of Word and Sacrament. As my own pastor says, there’s room for everyone at the table — you just have to be willing to take part in the discussion.

My pastor calls me the “person on the pew,” as I’m the only regular staff member who’s also a church member. As that person on the pew, I’m even more excited to attend worship. Seeing the places we read about in scripture will make my weekly worship experience even more meaningful, I think. I know that the pastors and seminarians on our trip will never read scripture the same way again, or preach the same way again. For all of us, the scriptures came alive.

I told someone today that it’s a hard trip to make physically, but well worth the effort. I believe the visit will give me a better understanding of my faith, but I don’t necessarily believe it will make my faith any deeper than the person sitting next to me on the pew every Sunday.

Because I am reminded of the words of Jesus to Thomas, “Blessed are those who have not seen and yet have to come believe.”