‘Lombardi’ shows a softer side of the famous coach 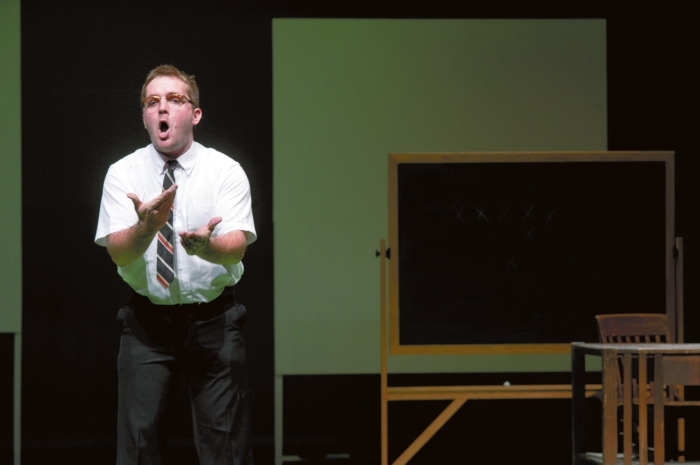 It’s no coincidence that Piedmont Players production of “Lombardi” comes the same week as the Super Bowl.

The Carolina Panthers are the producing partner. The Super Bowl trophy is the Lombardi award. Director and Designer Reid Leonard came up with a winning play.

Ed Whitney blasts and blusters, hot under the collar and sweating with nerves as the complex man Vince Lombardi was. His life was football and football was his life. It was his religion, his belief system and his greatest love.

Kathleen Tronsor, as Marie Lombardi, his faithful, long-suffering life, brings out his soft side now and then, when he’s not shouting “SHUT UP MARIE!” Tronsor plays her with a blend of anger, support, love and resignation. This is her man, and she’s sticking with him.

Together the pair create vivid portrayals of a very complicated marriage and a very complicated, conflicted and driven man. Vince Lombardi goes to Mass every morning to pray for patience. “It doesn’t help,” he tells reporter Michael McCormick.

Tony Moore, whom theater-goers have seen in two productions at Lee Street theatre, “The Sugar” and “Next Fall,” plays Michael with an understated reverence for the game of football. Moore plays the reporter with a mix of awe and toughness. He wants to get a good story about Lombardi, who hated the press, and he wants to hang out with some of his favorite football players.

The reason Lombardi grants him any access is Michael’s boss is a buddy. Lombardi knows he can control the story. Michael has other ideas.

Nevertheless, the play shows, in scene after scene, how demanding the coach was, how much he expected from his players, and how important loyalty was to him.

Whitney, as Piedmont patrons saw in “To Kill a Mockingbird,” has passion aplenty. Here, he  manages to modulate it, screaming and spitting one minute, worn out and vulnerable the next. Even if you’re not up on football, you come to understand what kind of man Lombardi was, and to admire him for his tenacity and his high standards.

The football players you’ll meet — not the entire team, naturally — are injury plagued Paul Hornung, played by Zachary Steven Oster; Jim Taylor, the man who brought in an agent to negotiate a contract, played by Brian Rassler; and Dave Robinson, played by Tony J. Crawford, an African American player who was finally inducted into the NFL Hall of Fame in 2013.

Crawford, as Robinson, is full of enthusiasm; his career as a professional wrestler helps make his athletic moves authentic. Rassler plays the guy who’s unstoppable and lets nothing keep him down. Oster plays Hornung with a sort of aw-shucks personality. He loves football, and, having played almost every position, he shines when Lombardi makes him the halfback.

By the end of the second act, there’s a feeling you should get up and cheer for Lombardi, who gives a great speech to his winning team, where he’s tough, but full of love.

Reporter Michael narrates parts of the play, and brings the audience up to date on Lombardi’s career after his winning seasons with the Green Bay Packers, and his early death from colon cancer.

You’ll leave knowing a lot more about the legendary coach, and shaking your head at the grossly overpaid athletes of today. “Lombardi” is less about football and more about life.

Piedmont Players production of “Lombardi,” underwritten by the Carolina Panthers, continues tonight and Saturday, as well as Feb. 4-7 at 7:30 p.m., with a 2:30 p.m. matinee this Sunday (you’ll be out in time for that other game), at the Meroney Theater in downtown Salisbury. The play is about two hours long with a 20-minute intermission. For tickets, call 704-633-5471 or go to www.piedmontplayers.com.