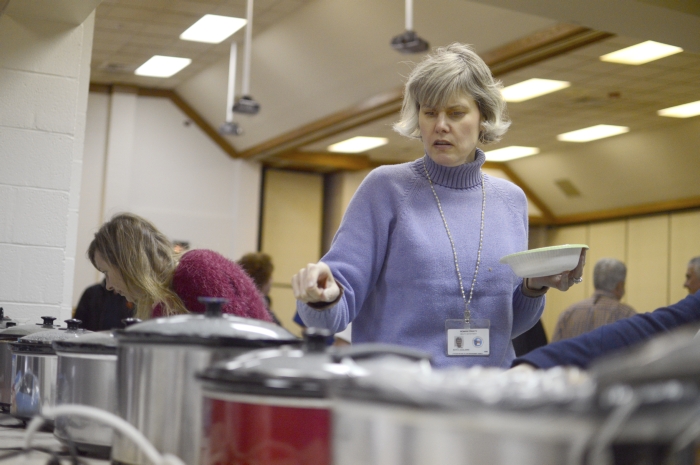 A search for the best chili among Rowan County government employees should begin at the Recycling Processing Center, according to all but one county commissioner.

On Thursday, the county held its first-ever chili competition, with all five commissioners serving as judges. The competition included 20 different concoctions — most were in the beef category — and each came with its own unique name.

“I hired the best and I expect the best,” bragged Environmental Management Director Kathryn Jolly after winners were announced.

But not all commissioners were satisfied with the results. Board of Commissioners Vice Chairman Jim Greene joked that he was filing a formal complaint because his votes didn’t count, as he didn’t try enough chili.

“I am protesting the outcome because I got here late and my vote didn’t count,” Greene joked. “They said that I didn’t test enough of the chili, so I have filed a formal complaint with my chairman. I’m still waiting to hear back from him about what will happen.”

Board of Commissioners Chairman Greg Edds, standing a few inches from Greene, joined in on the jovial comments, which characterized much of the competition.

“Our pledge to get along is officially over,” Edds said. “We’ve had our first major fight. I will neither confirm nor deny whether punches were thrown, but I will say punches were avoided.”

Perhaps the only county commissioner who talked semi-seriously about the judging was Mike Caskey, who said he liked a meaty chili. Caskey tried to keep a straight face as Edds and Greene giggled.

When talking about their winning chili, Heglar and Snipes were relatively humble. Heglar said he just experimented with ingredients until the taste was right.

“I didn’t really measure anything. I just dumped it in there,” Heglar said. “I just add and taste as I go. In all my cooking, I never really measure when I’m cooking.”

Perhaps it was beginner’s luck, but Snipes said Thursday’s first-place prize was also the first time he had ever tried to make chili.

Register of Deeds John Brindle rounded out the top three in the meat chili category.