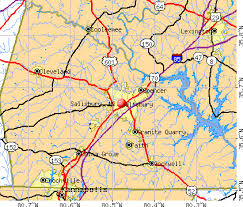 Salisbury on the map

Salisbury Planning Board members are having trouble seeing the forest for the trees — or the business area for the businesses. When it comes to a rezoning request on Jake Alexander Boulevard, it might help for board members to step back and look at the bigger picture.

On Tuesday, the board turned down John Leatherman’s rezoning request for a parcel in the 400 block of the boulevard, a vacant lot that sits amid a strip of offices across the street from Castlewood Drive. The area is zoned residential mixed use; Leatherman seeks highway-business zoning with a conditional district overlay so he can sell the property for a drive-thru retail restaurant — in this case, Salisbury’s second Zaxby’s.

Planning Board members appeared to look at the request primarily within the narrow context of the neighboring offices, not taking into account other restaurants nearby. As a result, they’ve taken a stand against a use that to thousands of passersby would look perfectly logical. A new restaurant on Jake Alexander Boulevard at an intersection? Why is there even any question?

Owners of the neighboring offices have an answer for that; they oppose the rezoning because they fear the impact of additional traffic and noise. Fair enough. Doing business next to a restaurant with a drive-thru is quite different from having another office next door; that’s true. But the business owners have chosen to locate along a busy boulevard that has become home to a mix of commercial uses.

While everyone can agree with the desire to avoid becoming “another Innes Street,” what’s proposed here does not allow pylon signs or a mish-mash of architecture. The conditional district overlay requires that the structure be built to the exact plan that Leatherman has submitted, which is compatible in architecture and scale with surrounding buildings, as the city’s planning staff noted in a memo. Anything other than that would have to come back and seek approval again. With these controls in place, city staff recommended giving Leatherman’s request a green light.

The Salisbury Planning Board is doing its job. It wisely turned down Leatherman’s earlier proposal, which did not include the conditional district overlay. The board’s decision this week took into account the concerns of immediate neighbors, who spoke up loud and clear. It would be hard to ignore those voices. But the city needs new investment, and city codes can put sufficient restrictions on this proposal to bring the building in line with its surroundings. As City Council members take up the matter next week, they have to weigh the entire city’s best interests. They also have to consider the possibility of losing this project to a site outside the city limits or even outside the county. That would be a shame. If Salisbury is to grow — as it needs to — residents are going to have to accept change, with reasonable controls. The status quo is not enough.