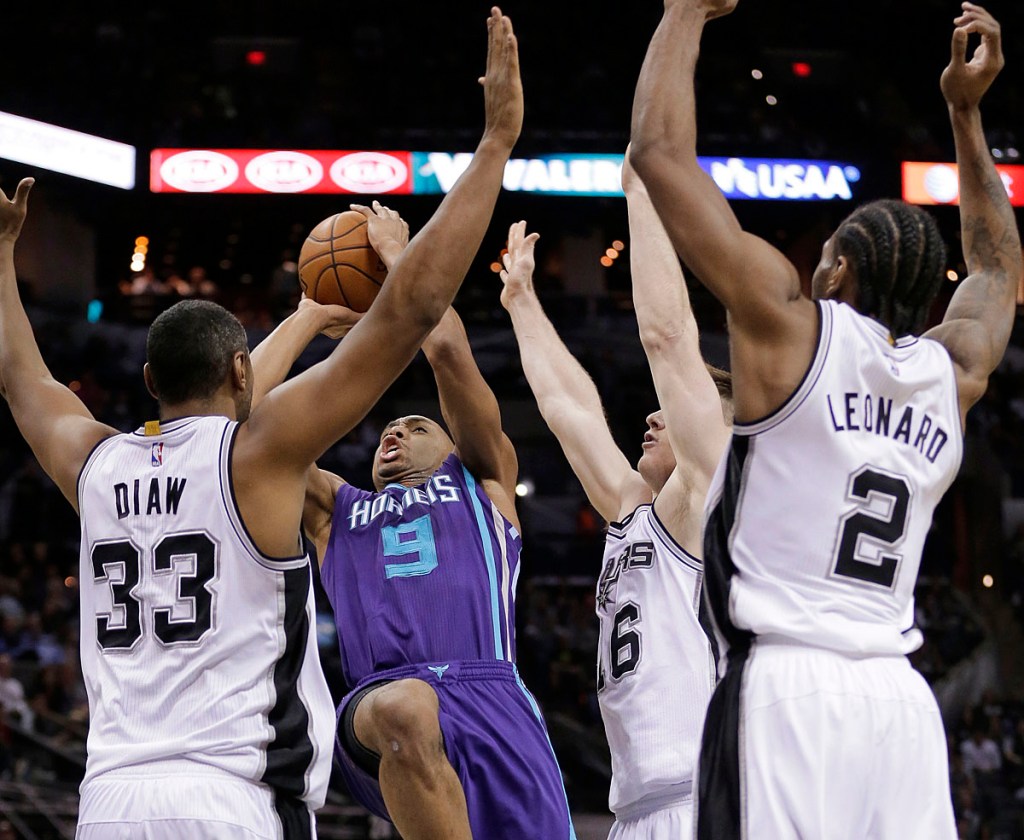 Danny Green had 16 points and Tim Duncan added 12 points and 14 rebounds as San Antonio won its sixth straight at home.

Gerald Henderson scored 18 points, Al Jefferson had 17 points and 16 rebounds and Michael Kidd-Gilchrist added 14 points for Charlotte. The Hornets were without star guard Kemba Walker, who will be out at least six weeks following surgery to repair a torn lateral meniscus in his left knee.

San Antonio built an 18-point lead in the first half as Charlotte struggled to fill its point guard depth without Walker, but the Spurs gave it all back just as quickly. San Antonio shot 4 for 21 from the field in the third quarter, but maintained its lead by hitting five free throws in the final 2 minutes.

The Spurs did not make another field goal in the third quarter following Matt Bonner’s 3-pointer with 7:18 remaining. Lance Stephenson punctuated the dry spell with an emphatic swat of Aron Bayne’s attempted reverse layup in the closing seconds of the period.

Bonner’s 3 to open the fourth quarter ended an 8:22 drought and reinvigorated the Spurs. San Antonio made four 3s in the final quarter in rebuilding a double-digit lead.

The victory proved difficult even without Walker.

With Walker out, Parker attacked the lane against the slower Brian Roberts and scored nine of the Spurs’ first 13 points. Parker closed the run with a 17-foot jumper over Roberts for a 13-12 lead with 6:19 remaining in the first quarter.

Despite Parker’s early success, the Hornets played the Spurs even when Roberts was in.

It was once Roberts exited that Charlotte struggled.

San Antonio made four 3s in a 14-2 run bridging the first and second quarter with Roberts out. After Green hit a 3 that led P.J. Hairston to roll his eyes and look skyward in frustration, Mills’ second 3 of the run gave San Antonio a 33-19 lead with 10:42 remaining in the first half.

Stephenson took over ball-handling duties when Roberts was out, and continued to do so at times even when the duo played together.

Hornets: Charlotte is 7-14 on the road this season. … Hornets coach Steve Clifford allowed Neal to give the pregame scouting report on his former team. His biggest advice? Manu Ginobili goes left. … Charlotte’s lone victory in San Antonio came Nov. 15, 2006, a 92-85 win in overtime.

Spurs: San Antonio is 8-3 in its last 11 games, second only to Atlanta (11-0) during that stretch. … After failing to reach an agreement with F JaMychal Green on a second, 10-day contract, the Spurs signed F Reggie Williams of the Oklahoma City Blue on Wednesday. The 6-foot-6 Williams was averaging 16.8 points, 5.3 rebounds and 3.3 assists in 13 games with the Blue before signing a 10-day contract with the Spurs. … San Antonio is 18-2 overall against Charlotte, losing once on the road and once at home to the Hornets.