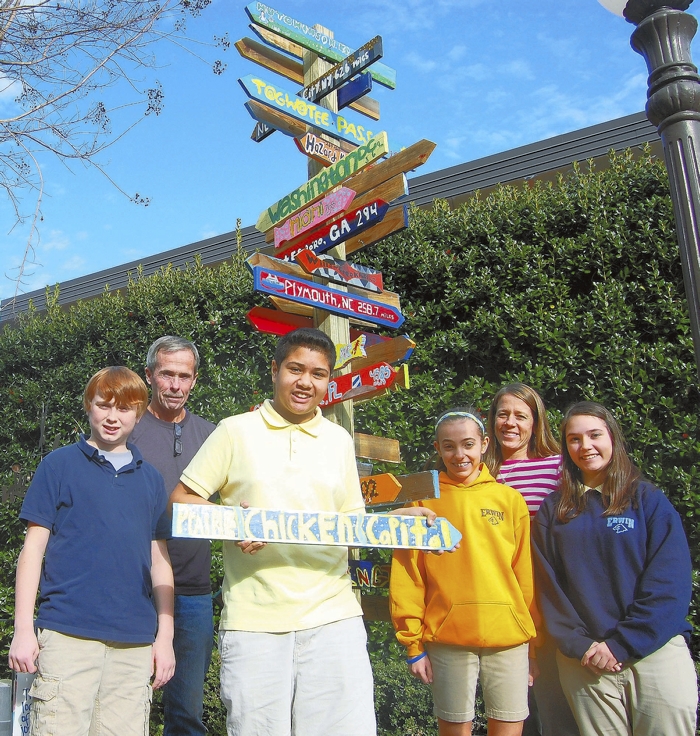 Meredith Abramson, a friend of Freeze’s, teaches art at Erwin Middle School. Over the past few months, her seventh- and eighth-grade classes set out to create a directional sign to commemorate Freeze’s journeys.

Her seventh-graders took on Freeze’s coast-to-coast trip from 2013, and the eighth-graders worked on signs from his trip spanning the length of the east coast.

Abramson, who spent a decade as a high school English teacher, added literacy, technology and collaboration components to the project – three of the Rowan-Salisbury School System’s top priorities.

“This project does all these things in an art classroom,” she said.

When she explained the project to her students, they read Freeze’s Salisbury Post articles about his journey, found the towns on a map and researched the towns they were assigned.

They also learned about the history and artistic styles of directional signs and discussed what they liked and disliked about different models.

The students were broken into pairs and worked together to brainstorm ideas for their signs. They were required to come up with a symbol that represented the town, as well as figure out the distance from the town to Freeze’s home. They came up with two ideas, then selected a design for their final project.

Before Abramson’s students began working on their signs, West Rowan High School shop students cut the arrows for the signs and sent them to Abramson’s class.

Abramson’s students used acrylic paint to decorate their signs with colors, fonts and symbols that reflect the town or that leg of Freeze’s journey.

Eighth-grade student Billy McGee and his partner, Ben Shoemaker, were assigned Plymouth – located just miles from the Albemarle Sound and the home of the Civil War battle where the CSS Albemarle was sunk.

McGee and Shoemaker used red, white and blue to decorate their sign – the Confederacy’s colors during the Civil War. The symbol they chose was the CSS Albemarle.

“We had to research what happened there,” McGee said, adding that they felt the most significant piece of Plymouth’s history was the historic Civil War battle.

Rather than paint the town name onto their sign, McGee and Shoemaker took their sign home and chiseled the letters into the wood to look like it was carved.

The Hosier Pass, Colorado sign is simplistic. Seventh-grader Adalie Harrison used white and gold paint over a background of bare wood. She chose that theme to mimic the national park sign at Hosier Pass, the tallest point on Freeze’s coast-to-coast trip.

After the students finished their signs, Freeze came in and talked to Abramson’s classes. He told them about his trips and took the time to tell each set of partners about the town on the sign they decorated.

“I was really energized by the whole thing. They were really interested,” Freeze said. “It was a great connection.”

“He had superstar status in my room,” Abramson said.

“My favorite part was that we got to meet David and hear his stories,” seventh-grade student Alejandro Murillo said.

“Thanks to David, they’re pointed in the right direction,” Abramson said.