For fishing gear, ‘Go to the candy store’ 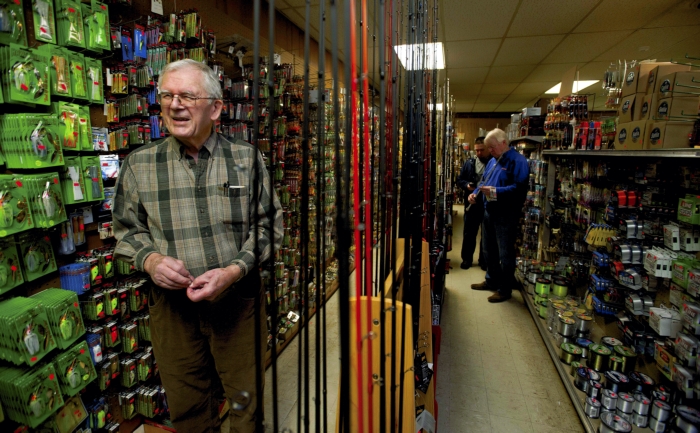 JON C. LAKEY / SALISBURY POST Ray Fleming manages the fishing section that is tucked away in the Fleming Candy Company on US 29 South. Over the years Fleming has devoted a large portion of his sales floor to cater to fishing and found that anglers will travel great distances to pick up hard to find items.

SALISBURY — Mark Staley walked toward the checkout counter with a box of Blow Pops, a bag of Bit-O-Honey and a Berkley Glowstick fishing rod.

Minutes earlier, Tonya Marion had eased up to the cash register with a box of chocolate-covered cherries and a new Lews fishing reel that she and her husband plan to use soon.

When you come to Fleming Candy Co., you don’t have to buy fishing tackle with your purchase of candy, nor is it required that you buy candy when you pick up your fishing supplies. But this double-dipping seems to happen a lot.

“You can’t leave without getting a pack of worms and a pack of candy,” Marion said, laughing at how unusual that might sound.

Fleming Candy Co.’s name throws off the unschooled fishermen, of course. Mark Staley remembers the first time his Uncle Johnny and his dad, Junior, invited him to make the fairly long trip from Arcadia to Salisbury for their fishing equipment needs.

Staley learned what others in the fishing community have found out over the past 40 years through word-of-mouth and, more recently, online commenting. Fleming Candy Co.’s wholesale prices and name-brand selections often make a visit to 3680 S. Main St. worthwhile.

About half the Fleming Candy Co. showroom next to the warehouse is devoted to all kinds of candies — familiar items such as Twizzlers, Junior Mints and wax lips. The Flemings — Ray, Jeff and Mike — also sell sports collectible cards, high-quality knives and Zippo lighters.

“It’s kind of like a best-kept-secret type of thing,” Mark Staley said.

Designed for surf fishing at night, the rod Staley purchased at Fleming Candy Co. would have cost him $30 more at the beach, he said.

“We tell everybody we know about this place,” said Marion, who enjoys bass fishing with her husband, Mike, on the Yadkin River chain of lakes. “It’s the best place, for the best price.”

Family runs deep at Fleming Candy Co., which  started business on Council Street in 1935. The pictures of founder Glenn Fleming, and his wife, Pearl, hold down prominent spots on the showroom wall.

In 1940, Glenn Fleming moved his business to South Church Street, where he had more room for a small warehouse to serve the needs of  “wagon jobbers” — men with trucks who picked up their candy orders at Fleming Candy Co., then sold it wholesale to stores on their routes through Rowan and neighboring counties.

Ray Fleming said his father’s own profit margin, which was only 2 percent, came directly from the candy makers such as Hershey.

Glenn Fleming died of liver cancer in 1956 during Ray’s senior year at Catawba College. Without missing a beat, Ray took over the business. At first, he was able to arrange a 3-5 p.m. window for distributing candy to the wagon jobbers, while still attending his college classes in the morning and early afternoon.

Fleming Candy Co. built a new warehouse and store at its current spot on South Main Street (U.S. 29) in 1966. Every 20 years, Ray said, the company has had to put a new roof on the place, but otherwise it looks pretty much the same as it did almost 50 years ago.

Though he didn’t push them into the business, Glenn’s sons, Jeff and Mike, joined him at Fleming Candy Co. after their own college days and together they run the operation today, still receiving considerable help from 79-year-old Ray — especially on the fishing gear.

It was Ray Fleming’s love of fishing and Fleming Candy Co.’s decision in 1970 to stop selling small appliances, televisions, stereos and tape recorders, which led the company into selling fishing tackle. Partly on instinct and partly on luck, Ray decided to start filling the space formerly devoted to the appliances with fishing equipment instead.

The stock just kept growing through the years as more fishermen learned Fleming Candy Co. was a pretty good resource. Ray Fleming said there’s a lot of truth in the saying that a fisherman wants to be in either of two places — on the water, or in a tackle shop.

One of Ray’s father’s wagon jobbers, a Mr. Windsor, first took him fishing as a boy. But he really developed a love for the sport after he and several buddies — now all gone — founded the Salisbury Bassmasters Club in 1970.

“I met a bunch of good guys in that club,” Ray said. “A group of us fished together for 35 years.”

Ray still attends the club’s regular meetings but he has stopped going to the fishing tournaments, mostly because of a left foot that sometimes falls asleep on him. It’s also harder these days to be fishing from a boat for eight-hour stretches.

A good stream of customers walk into Fleming Candy Co. daily, and more of them are fishermen than candy shoppers.

Ray said the prices on the company’s fishing tackle are good because it doesn’t have the overhead big-box retailers have.  “We don’t have high-dollar reels and rods — and we don’t need them,” he added.

Like an anthropologist, Ray Fleming likes to observe the routines and spending habits of fishermen.

People who come to Fleming Candy Co. from outside of Rowan County or from other states tend to buy more on their visits because they’ve traveled a considerable distance. On Wednesday morning, a customer who had driven a hour to reach the showroom ended up spending $360 on rods, reels and lures.

Ray said most wives would be shocked to know what their husbands spend on tackle, especially the bass fishermen. In a way, it has helped the candy sales at times, because men make sure to take something home for their wives.

Rainy Saturdays are maybe the best times for selling fishing tackle. Jeff Fleming has arrived at Fleming Candy Co. on those kinds of Saturdays to find fishermen waiting to get in.

“The guys that fish — if they can’t fish, they like to look at the fishing tackle,” Jeff said.

“At least once a week, we get somebody new,” Mike Fleming said. “They say people told them, ‘Go to the candy store.'”

The enthusiasm for fishing tackle now overshadows the fact Fleming Candy Co. still has a healthy wholesale business for candy and tobacco products.

The company essentially serves as a warehouse for small mom-and-pop stores that can’t afford warehouse space of their own. Plus, candy has its busy seasons, too, such as Valentine’s Day and Halloween.

Ray Fleming — again, the anthropologist — said so many things have changed about the business, but Fleming Candy Co. keeps adapting. Once, for example, the company stocked all kinds of health and beauty aids. Now, it has gotten rid of virtually all of those products except for headache powders.

Sports cards — especially baseball cards — once were a major part of the business in the late 1980s and early 1990s. But the bubble burst on card companies and collecting, much like a stock market crash.

Hands down, the candy company’s biggest adaptation has been going into the fishing supply business. Has it ever made the Flemings think about changing the name?

Ray said “Fleming Tackle Co.” might make better sense, or even “Fleming Tobacco.” But “Fleming Candy Co.” has a lot of sentiment attached to it, plus a unique reputation among fishermen.

“If they sold live bait, I think they’d have the market cornered,” Mark Staley said.