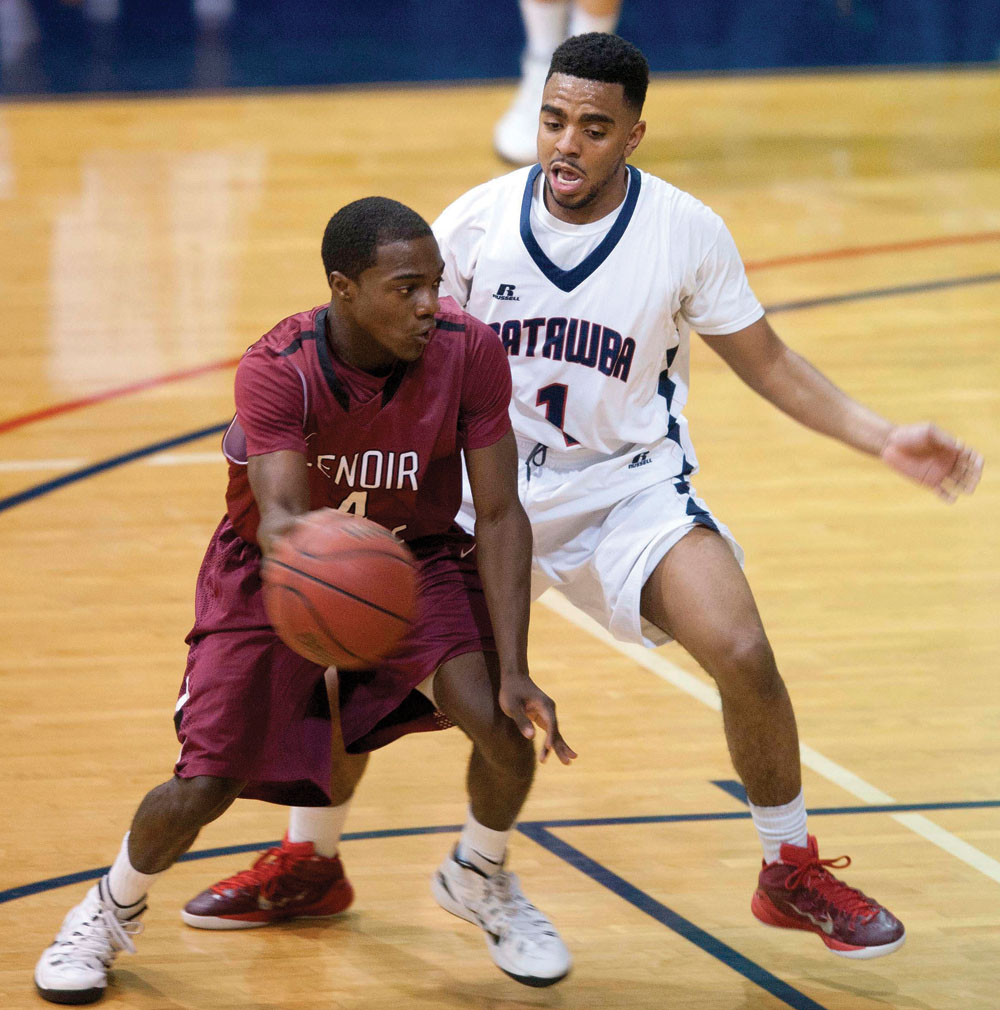 SALISBURY — Jerrin Morrison is a high-flyer with great offensive potential, but Catawba asked him to be a defender first in Wednesday’s grinding 68-58 conference win against Lenoir-Rhyne at Goodman Gym.

Morrison’s assignment was Lenoir-Rhyne guard Will Perry, who can drill 3-pointers or drive.  Perry was averaging 17.4 points per game and Morrison took his assignment seriously.

“I told Jerrin to have the goal of shutting Perry out the first four minutes,” Catawba coach Rob Perron said. “He walked by the bench after four minutes and nodded, and then he would come by and say, ‘Eight minutes.’ And then it was ‘Ten minutes.’

“He wasn’t talking trash, he was just locked in defensively and was determined not to let Perry get going.”

Perry didn’t score until only nine seconds were left in the first half. That’s when he made two free throws.

Perry finished with nine points. Catawba took charge four minutes into the game, and despite shooting  a modest 36.5 percent, never lost the lead.

“Just a great team defensive effort,” said K.J. Arrington, who led the Indians with 21 points and eight rebounds. “We studied their personnel, understood what their guys could and couldn’t do and carried out the gameplan.”

Lenoir-Rhyne (7-10, 5-8 SAC), coached by 29-year veteran John Lentz, is a half-court team reliant on execution. Catawba had drilled and re-drilled on Lenoir-Rhyne’s half-court sets and knew them almost as well as the Bears did.

“They’ve got a lot of guys who can do one thing really well,” Perron said. “Our focus was on taking that thing away. Seven of our last 10 practices have been defensive practices, and we won with defense tonight.”

Catawba led by as many as 13 in the first half and was up 30-22 at halftime, even with zero free-throw attempts and with Morrison shooting 1-for-6.

Catawba didn’t allow the Bears to make a serious run, because Arrington made 11 free throws after the break and because Catawba’s big guys — 6-foot-9 Troy Warren and 6-foot-6 Vismantas Marijosius — turned in solid games. Warren had 10 points and seven boards, while Marijosius shot 4-for-4 and scored nine. The two post players won most of their battles with Lenoir-Rhyne’s 7-foot-1 Jake Wilson.

Rob Noyes, a 6-foot-6 forward, led the Bears with 14 points and 12 rebounds before fouling out.

Arrington made the game’s biggest shot after the Bears pulled within 51-43 with 4:35 remaining. With an offensive possession going nowhere, Perron got a timeout with eight seconds on the shot clock. When play resumed, Arrington nailed a tough,  spinning one-hander, a shot he said he practices daily.

“It was a good win against our biggest rival,” Marijosius said. “We protected our house. We locked the door.”