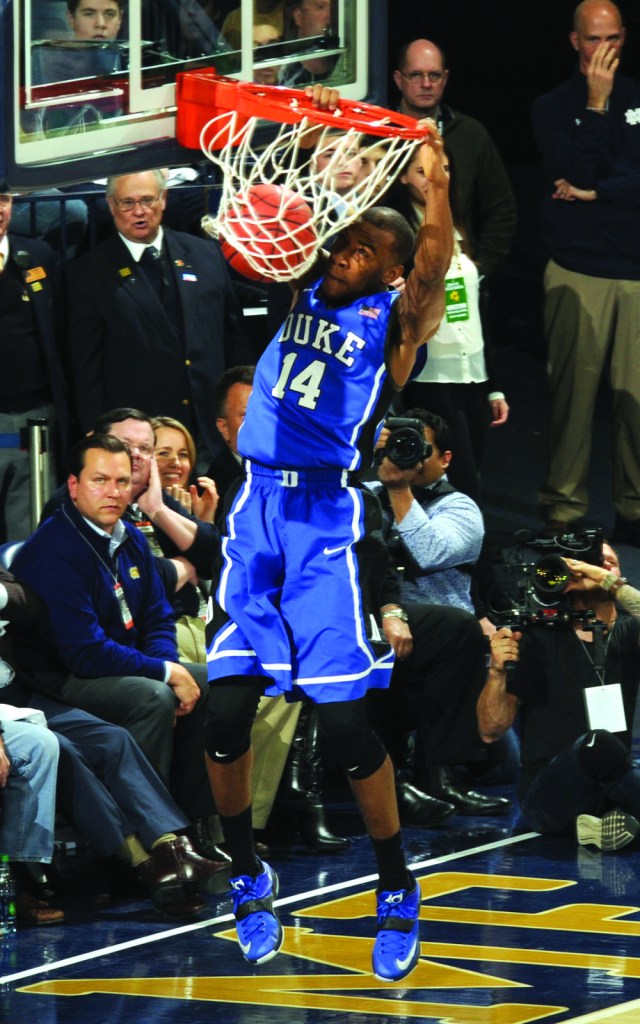 The Associated Press Duke guard Rasheed Sulaimon dunks Wednesday in the first half of the Blue Devils' 77-73 loss at Notre Dame.

Coach Mike Krzyzewski said in a statement that Sulaimon “has been unable to consistently live up to the standards required to be a member of our program.

“It is a privilege to represent Duke University and with that privilege comes the responsibility to conduct oneself in a certain manner,” he said. “After Rasheed repeatedly struggled to meet the necessary obligations, it became apparent that it was time to dismiss him from the program.”

Krzyewski didn’t not give any details as to what standards or conduct Sulaimon failed to meet, but university spokesman Matt Plizga said that Sulaimon, a junior from Houston, remains in good academic standing and is expected to finish the spring semester.

Sulaimon was averaging 7.5 points, 2 rebounds and 1.8 assists this year, coming off the bench in every game.

The move comes a day after the fourth-ranked Blue Devils (17-3, 4-3 Atlantic Coast Conference) lost at No. 8 Notre Dame. They visit unbeaten and No. 2 Virginia on Saturday night.

Sulaimon’s playing time steadily declined during his three seasons. He started 33 of 36 games as a freshman in 2012-13 before bouncing in and out of the starting lineup last year.

He averaged 29.2 minutes during his first year while playing at least 15 minutes in every game, but averaged 25.6 as a sophomore. He’s playing just 19.3 minutes per game this season.

During one two-game stretch last season, he was held out of a home win against Michigan, then played just five minutes against Gardner-Webb, with Krzyzewski saying at the time that the guard “has got to play better than the guys who played” in those games.

Sulaimon is the first player to be kicked off the team this year, though reserve Semi Ojelele announced plans to transfer last month.

Only three reserves — Sulaimon, Marshall Plumlee and Matt Jones — played in the Notre Dame loss. Sulaimon made just one of his six shots in 12 minutes — the second-fewest of the eight players who saw the court against the Fighting Irish.