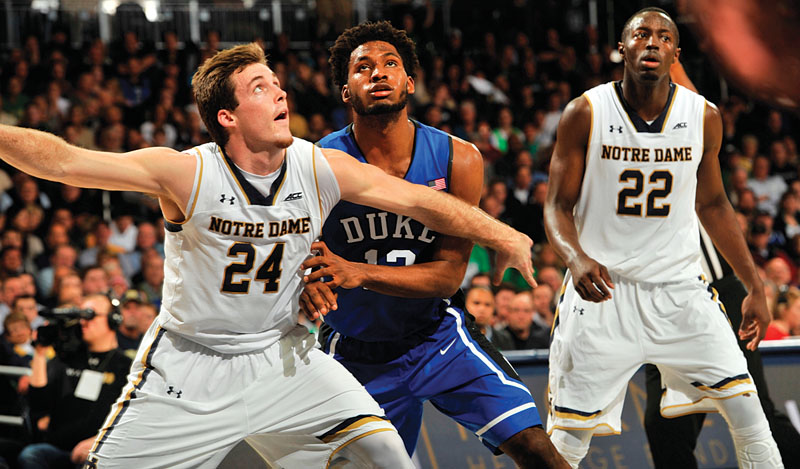 Grant lost control of the ball, picked it up at the free throw line and got a shot off just in time to give the Irish a 73-70 lead with 67 seconds left. After Quinn Cook hit a pair of free throws, Grant looked as though he was holding for a shot. But he fired it over to Steve Vasturia in the corner for a 3-pointer, giving the Irish a 76-72 lead. Grant then blocked a layup attempt to end the threat by Duke.

The win keeps Notre Dame (20-2, 8-1 Atlantic Coast Conference), which finished in 13th place in its first season in the league last year, in second-place halfway through the conference season, a game behind Virginia. Duke (17-3, 4-3) is off to its worst start in league play since opening the 1995-96 3-4 after losing their first four league games.

The game was a battle of two player-of-the-year candidates and Grant came up with the big plays at the end. Jahlil Okafor led Duke with 22 points and 17 rebouinds, but he was 2-of-7 from the free throw line, including 1-of-5 in the final 4:30. Duke was just 10-of-20 from the free-throw line while the Irish were 11-of-16.

The Blue Devils failed to make the most of their opportunities, finishing with 13 offensive rebounds but had just nine second-chance points.

The Irish switched to a five-guard lineup that had been successful in recent games and V.J. Beachem quickly scored on a slam dunk. But the Irish had to go back to a traditional lineup when Connaughton banged his head hard on the court.

A 3-pointer by Jones gave the Blue Devils a 63-53 lead. Moments later, though, a 12-0 run by Notre Dame made it  65-63 after a fastbreak layup by Jackson, a basket inside by Auguste over Okafor and a layup by Grant.

Duke: The Blue Devils failed in their attempt to win three games against top 10 opponents on the road for the first time in program history. They beat then-No. 2 Wisconsin 80-70 on Dec. 3 and then-No. 6 Louisville 63-52 on Jan. 17. … Okafor scored in double figures for the 20th straight game. … The Blue Devils lead the series against Notre Dame 19-4.

Notre Dame: The Irish improved to 6-1 at home against top-10 teams, with the only loss coming against then-No. 3 Virginia earlier this month. … The Irish are 14-7 overall under coach Mike Brey against top-10 teams at home. … Notre Dame is 6-1 this season in games decided by five points … Notre Dame has won two straight against Duke. … It was Notre Dame’s 600th home victory since the Joyce Center opened since the building opened during the 1968-69 season. The Irish are 600-157 at home in that span.