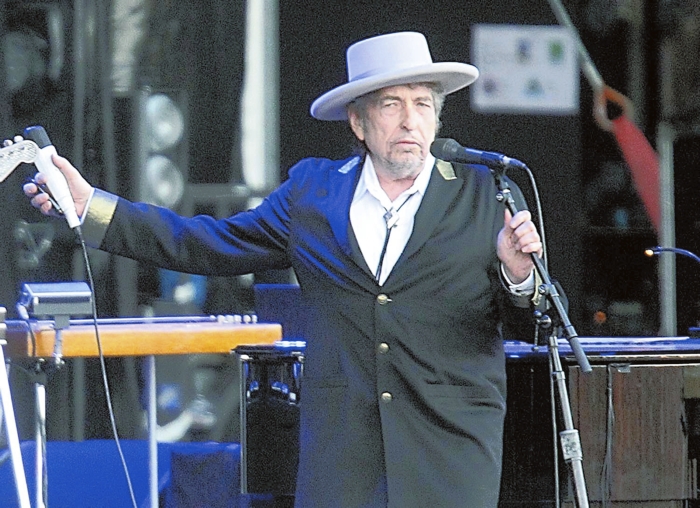 SALISBURY — The past few days my mind has found it difficult to let go of a news blurb about Bob Dylan, the folk-singing icon.

If he had it to do over again, the now 73-year-old Dylan told a reporter for AARP magazine, he would be a schoolteacher. Since then, I’ve been trying to imagine the simple twist of fate that could have thrown Robert Zimmerman in front of a class, imparting his minstrel wisdom to young minds.

He really did miss his calling. For any school subject or occasion, the “Voice of a Generation” would have a line at the ready.

Dylan, giving a geography lesson: “Where am I if I’m stuck inside of Mobile with the Memphis blues again?”

Dylan, the English teacher, giving an example of bad grammar: “I ain’t gonna work on Maggie’s farm no more.”

Dylan, the thoughtful  philosophy teacher: “How many roads must a man walk down before you call him a man?”

Dylan, the science teacher: “How many years can a mountain exist before it is washed to the sea?”

Dylan, the math teacher: “When you (ain’t) got nothing, you got nothing to lose.”

Dylan, again the English teacher, covering verse written by an Italian poet from the 13th century: “And every one of them words rang true and glowed like burning coal.'”

Dylan, the science teacher, welcoming his class to a new section on meteorology: “Come in, I’ll give you shelter from the storm.” Tomorrow’s lesson: idiot winds, hurricanes and hard rains.

Dylan, the music teacher, to a young student: “Hey, Mr. Tambourine man, play a song for me.”

Dylan, the history teacher, discussing Blackbeard, the pirate: “He hears the ticking of the clocks and walks along with a parrot that talks.”

Dylan, a criminal justice instructor at the community college, describing the burned-out feelings law enforcement officers experience: “Mama, take this badge off of me.”

Dylan, the teacher/coach, giving his basketball squad a locker room pep talk at halftime: “There’s a battle outside, and it’s ragin’.”

Dylan, on the new student handbook: “The times they are a-changin.”

Dylan, during a show-and-tell day when a student brings in his pet dog: “Lay, Lady, lay.”

Dylan, describing a civil rights case in New Jersey during the school’s Black History Month: “In Paterson, that’s just the way things go. If you’re black, you might as well not show up on the street, unless you want to draw the heat.”

Dylan, dismissing his class at the end of the day: “You shall be released.”

There, I’m finished. I hope I haven’t tangled anyone up in blue, but I finally have this Dylan-as-schoolteacher-thing out of my system.

I’m invisible now and have no secrets to conceal.