Trip to the Holy Land Day 4: He is Risen 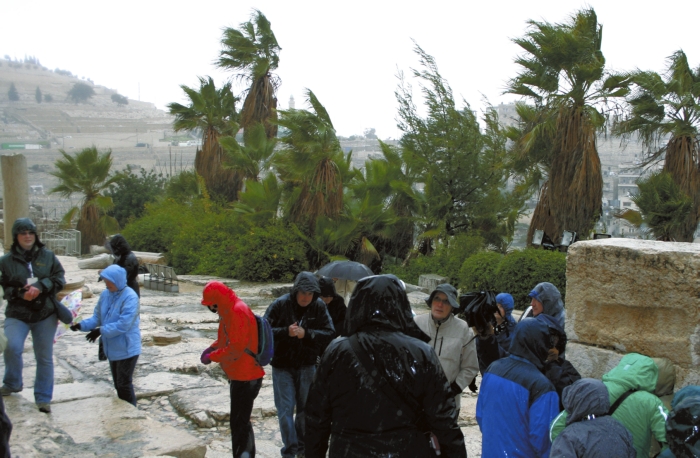 On the steps where Jesus preached in Jerusalem. Note the rain and high winds. Susan Shinn, for the Salisbury Post.

Editor’s note: This is the fourth in a series by freelance writer Susan Shinn on her recent journey to the Holy Land with a group from the North Carolina Lutheran Synod.

As seminarian Justin Rimbo said later, Wednesday was our most exhausting day physically, emotionally and theologically. It was the day we visited the Church of the Holy Sepulchre, the enormous structure that contains Golgotha, where Jesus was crucified, and also his tomb. It was also the day we encountered wind, rain, sleet and snow.

Our morning started going through security at the Western Wall. The Israel guards were brisk and efficient. They wielded large guns, which we became accustomed to seeing at checkpoints. We walked over the wall onto the Temple Mount, where the original temple stood before its destruction in 70 BCE. Today, two mosques stand at either end. One is the Dome of the Rock, the other is El Aksa. We were allowed to go in neither, but took plenty of photographs. The wind was so fierce at that point that I imagined this is what it must be like atop Mount Everest — although I had neither oxygen nor a Sherpa, both of which I could’ve used.

From there, we walked back down to the Western Wall — previously called the Wailing Wall. Because no other fools were out in the weather, we had it all to ourselves. It was eerily quiet and obviously a place of great power and energy. Like so many others before me, I wrote out my prayers and folded them up into a tiny square, and fitted it into a crack in the wall. I prayed for my church family, my precious parents and of course my wonderful son. Many had meaningful experiences there, and I tried not to pry — although I desperately wanted their reactions.

“I knew the presence of God was with me as I walked to the wall and laid my hands on it,” she said. “I poured out prayers for those who asked for prayers, and praying for Jerusalem and the Palestinians, and so many other things the Holy Spirit gave to me. And then I began to cry, and I knew that the presence of God is definitely in this place and on that wall.”

With the threat of snow in the forecast, Dr. Luker decided to take us on to the Church of the Holy Sepulchre. We ventured down narrow alleys and slippery limestone steps, arriving a few minutes later. It seemed longer than it was.

Inside the line to the tomb wasn’t long. Unfortunately, however, there was a pedestrian gate that herded us into a crowd about six deep. I can’t be in crowds, and soon had to join Dr. Luker on the other side of the partition. He was not going through, and said I could stay with him. We walked around to the entrance with our group, and I noticed that the gates ended where people were exiting. Ruth Klug approached me. “Just ask to go around, and come in with our group. I really want you to do this.”

Emboldened, I asked the priest if that was OK. Whoever thought you could cut line at the Holy Sepulchre? But that’s what I did.

I walked in with Bishop Bolick and his wife, Rita. There was a small anteroom, and room to fit just three at a time in front of the tomb itself. As we knelt down on the marble floor, time seemed to slow, and the space was quiet and peaceful. Leonard and Rita both prayed, but I could only kneel there, and look around in amazement. I was overwhelmed. I noticed a fresh bouquet of red roses, and leaned down to kiss the marble and pressed my cheek against it. I’d done the same at the Western Wall.

The three of us walked out together, not speaking for several minutes. I looked up at the bishop.

Leonard grinned. “He is risen indeed!”

Just yards away was Golgotha. We climbed steep steps and knelt under an altar to put our hands into the hole in the rock where the cross had been. The Franciscan monks were starting afternoon prayer, so we rushed downstairs to watch the procession. The church was also closing, so that meant we had to hurry.

After a delightful lunch at a nearby Armenian restaurant — we learned that Armenian Christmas is celebrated Jan. 20 — we set off in the sleet and snow to the Upper Room. It was closed. Instead, Dr. Luker took us to Dormition Basilica, where Mary is said to be buried.

Under the dome, Dr. Luker asked Gary Mitchell to sing “Ave Maria,” which he did. It was stunning.

Also that day, we were able to spend time in quiet contemplation at the Garden of Gethsemane. It was a favorite stop of many of our pilgrims.

We had a bit more relaxed day today. We met Pastor Mark Brown, the administrator of Augusta Victoria Hospital, one of six Palestinian hospitals in the West Bank. Run by Lutheran World Federation, its specialty area is oncology and nephrology. Because of the travel situation for Palestinians, the hospital houses patients who must undergo weeks of radiology treatments. Daily transportation to and from the hospital is not guaranteed.

Our lecture took place in the hospital’s chapel, the Lutheran Church of the Ascension. Afterward our “tour choir” sang “Beautiful Savior” in all its four-part glory.

Back at our hotel, we heard an informative lecture by Dr. Mustafa Abu Sway, dean of Islamic Studies at Al-Quds University in Jerusalem.

“I do believe that we can live together — Jews, Christians and Muslims,” Sway said. “But the imbalance in every single thing should not be there. Under occupation, Palestinians may not realize discrimination is not the norm.”

He added, “Your neighbor is someone who has a need. You cannot be a friend of God and be selfish.”

During vespers that night, Leonard talked about the impact of Lutheran World Federation, comprised of more than 70 different Lutheran church bodies.

“It is a place where Lutherans around the world can work together,” he said.

“This world is huge!” seminarian Megan Lineberger said. “You just don’t realize what else is going on. My world was expanded drastically today.”