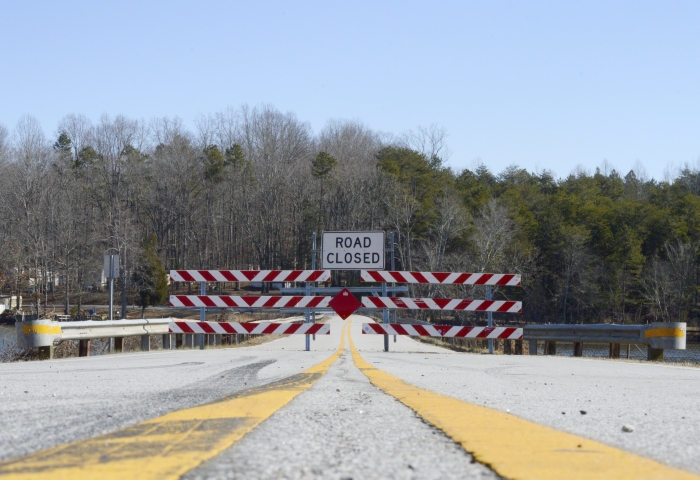 St. Matthews Church Road, closed since 2013, will soon have one lane open to traffic. The part of the road that spans an inlet on High Rock Lake needs repair.

The North Carolina Department of Transportation is expected to finally address a road closure that’s lasted for over a year and increased travel times for school buses, emergency personnel and local residents.

On Tuesday, the Department of Transportation announced in a news release that its board would vote to approve $200,000 for a temporary project to open one lane of St. Matthews Church Road over an inlet of High Rock Lake. The Department of Transportation Board will next meet in February to approve the funding, which would be used to install two temporary traffic signals and a guardrail or concrete barrier.

The road was closed in Sept. 2013 after Department of Transportation discovered cracks in the causeway’s pavement. An investigation last year found that the foundation of the 85-year-old causeway was crumbling. The causeway needed to be widened to support the traffic volume, the investigation found.

With the temporary opening, only local and emergency traffic would be allowed on the St. Matthews Church Road causeway. A news release said commercial vehicles would be prohibited to minimize any further damage.

When asked about the reopening Tuesday, Division 9 Engineer Pat Ivey said he “didn’t anticipate any problems at all” with the funding being approved.

“While motorist safety is always our top priority, we wanted to be responsibe to the concerns of the community,” Ivey said. “The Rowan County Commissioners and legislative delegation communicated citizens’ concerns and worked with DOT to help solve the problem.”

He said the two stop lights would allow both east- and west-bound traffic to use the causeway. Road sensors would tell the stoplights when to change colors, Ivey said. Lights wouldn’t change until the last car crosses the bridge, he said.

Installing temporary lights is a project that DOT has used when construction limits the number of available lanes, he said.

When asked about the temporary reopening, local residents, likewise, said it would help tremendously, but expressed concern about the impact the closure had on other nearby roads as well as the timeline for a permanent solution.

“You can go across Ribelin Road, but they’ve traveled that one so much that now it’s been torn up,” said Rick Tutweiler, who owns a store on Stokes Ferry Road. “You wouldn’t want to go across that road with a cup of hot coffee.”

Tutweiler was one of more than 700 people who signed a petition, circulated by St. Matthews Church Road resident Lisa Trexler, asking the North Carolina Department of Transportation to permanently repair the causeway. Among other things, the resolution cites time added to commutes and danger added by a road that separates a community divided by a High Rock Lake inlet.

“I think its wonderful that DOT is finally responding to needs of community. but think it’s outrageous it’s taken so long and taken such an organized effort by the local citizens,” Trexler said.

Like Tutweiler, Trexler said Ribelin Road is talked about as one of the many nearby roads that’s suffered as a result of the closure. Additional traffic on Ribelin has created dozens of potholes, she said.

Ivey said the department of transportation is currently looking to find funding for a permanent solution, which is estimated to cost $3.2 million. Plans for the design of a new road are already approved, he said.

He said funding for the permanent solution wouldn’t be available until next fiscal year, which begins in July.