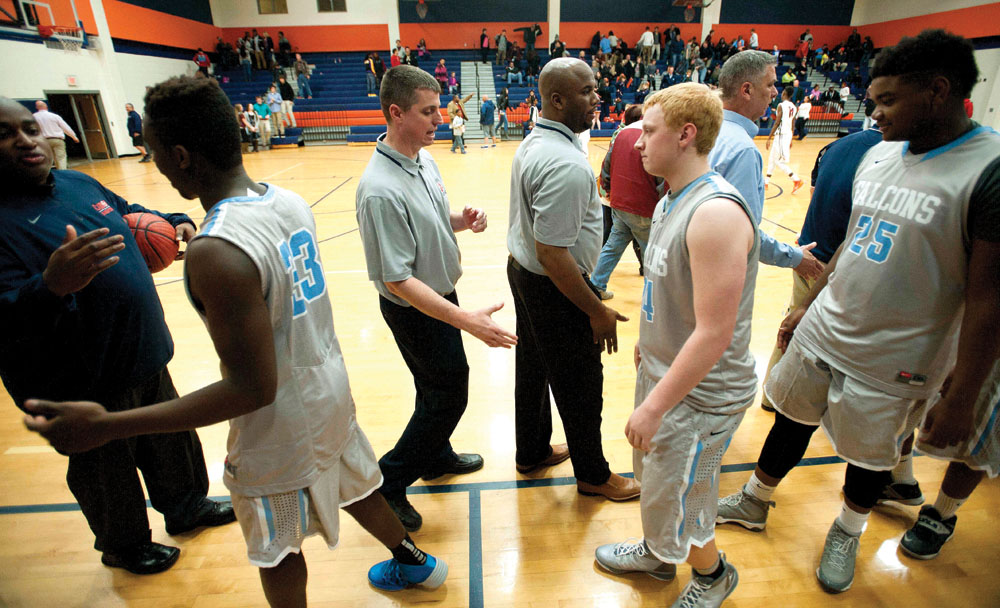 The win is the 100th of Perry’s career win. It came against rival West Rowan and against Mike Gurley, his former mentor and the winningest coach in Rowan County history. Gurley, in his 18th season in Mount Ulla, has coached the Falcons to 364 victories.

That total puts Perry’s 100 in perspective and explains why he really didn’t want to make a fuss about it.

“The only thing that  matters is we’re fighting for a playoff spot, and this win helps keep us in the mix,” Perry said.

Since Carson opened in 2006, the Cougars are a respectable 9-15 against West Rowan. Carson has taken two out of three meetings with West Rowan each of the last three seasons, but this marked the first time Carson (9-10, 6-5) swept the Falcons (11-8, 7-4) in conference games.

“This was a typical game for us,” Perry said. “We’ve got a bunch of guys who average eight or nine points a game. When we’re all on the same page, we can be hard to guard.”

Freshman Caleb Mauldin had 17 for the Falcons, while sophomore Kortez Weeks added 10.

Still, Gurley felt the outcome was mostly about Carson winning the hustle stuff.

“If there was a loose ball, they got it, and if there was a tough rebound, they came down with it,” Gurley said. “There are some things we take a lot of pride in and usually do well that we didn’t do tonight.”

West Rowan led by four late in the first half, but Perry got a timeout, settled down his team, and Rucker made a 3-pointer that sent the Cougars to the break down 27-26.

Then Carson had a 6-0 burst to start the third quarter, with Marquez McCain scoring twice on drives and Rucker making two free throws. After Rucker and Westbrook hit 3-pointers, Carson suddenly had a 10-point lead.

“We had a really embarrassing performance in our last game (a 53-29 loss at Northwest Cabarrus), so we knew we had to come out and show everyone we were better than that,” Rucker said. “We were aggressive in the second half, the energy and intensity started picking up, and we started getting stops.”

The Falcons got back within three with five minutes left on a three-point play by Mauldin, but driving buckets by McCain and Raper and another 3-pointer by Westbrook stopped the Falcons. When Ryan Bearden muscled for two inside with 1:57 left, the Cougars were up 60-51 and headed for victory.

“Carson made the energy plays, so all credit to them,” Gurley said. “I’m proud of Brian on getting his 100th win.”

College Basketball: Bubbles Phifer is back in form