Trip to the Holy Land Day 3: A complicated peace 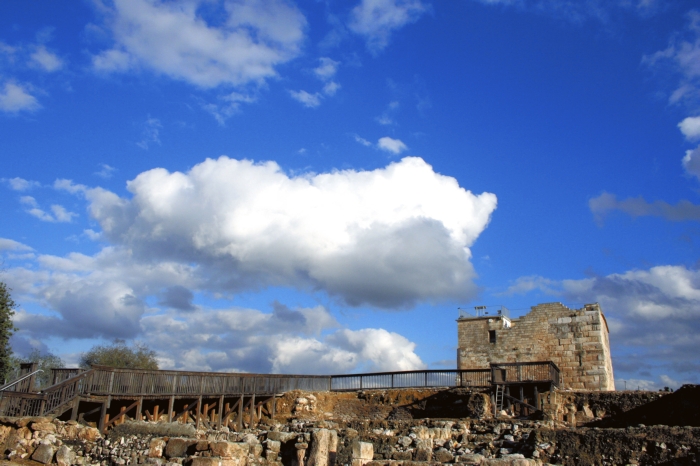 Following a meeting with Archbishop Chacour, Shinn spent the afternoon exploring the first-century fortress at Zippori. She could see modern-day Nazareth from the top of the fortress. Susan Shinn, for the Salisbury Post.

Editor’s note: This is the third in a series by freelance writer Susan Shinn on her recent journey to the Holy Land with a group from the North Carolina Lutheran Synod.

To a person, everyone we talked with about the possibility of peace in the Middle East said, “It’s complicated.”

Yet every Palestinian person we talked with wanted peace.

One of those people is Archbishop Elias Chacour, of the Melchite church. It is a Roman Catholic denomination with some 80,000 members. Along with several other tour groups, we had an audience with Abuna (“Father”) that morning.

Before meeting with Abuna, we’d had a tour of the lovely new Church of the Beatitudes, also known as the Church of the Sermon on the Mount. Our tour guide, Michael, a Palestinian, wanted us to know that we were brothers and sisters in the Spirit of Jesus Christ.

In a long conversation, Abuna tried to explain to us a bit about the situation from the Palestinian and Jewish points of view. Why Jews had come here. Why Palestinians wanted to be here, too.

Palestinians, he said, are second-class citizens, limited in their rights and movements. He and his family were driven from their home in 1948, when Jewish settlements began to appear. He was eventually reunited with his father, and went on to be educated at the Sorbonne. Abuna speaks 11 languages, and has met presidents and other politicians in his quest for peace and his fight for the education of Palestinian children. Because of government corruption, it took him years to build a school for Palestinians. And he did so with the help of James and Susan Baker, the former secretary of state and his wife. Now 3,500 Christian, Jewish and Muslim students attend classes there.

“They became my children,” he said. “They have all my love.”

Abuna left us with this challenge: “We need to raise hell, when hell needs to be raised. You can make a change around you. I need your friendship and your solidarity.”

During our devotions that night, Bishop Bolick told us how much he loves watching old Western movies.

“There was always the white hat and the black hat,” he said. “You always knew who was good and who was bad. With Abuna Chacour, we learned it’s not black and white; it’s shades of gray. Yesterday, we were at the Gates of Hell. Today, we were invited to raise hell.”

“Upon entering the house, the wise men saw the child with Mary his mother; and they knelt down and paid him homage. Then, opening their treasure chests, they offered him gifts of gold, frankincense, and myrrh. And having been warned in a dream not to return to Herod, they left for their own country by another road.”

I started the day of Epiphany early with a pre-dawn run by the Sea of Galilee with Pastor Jon Heiliger, who serves in Bluffton, S.C.

Ironically our turnaround point on the 3½-mile route was the finish line for the upcoming Tiberius marathon. I ran under it as Jon cheered for me.

“Do you think Jesus would have been a runner?” I asked Jon.

St. John’s holds a special place in Jon’s heart, as the congregation helped fund his seminary education. He fondly remembers meeting Wilson Smith and others in the congregation. The world is small, but for me got even smaller on the trip.

Another busy day was on the schedule with Mass at the Basilica of the Annunciation in Nazareth. In 1968, this Catholic church was built over Mary’s house, the dwelling where the Holy Family lived. Throughout the church are artistic representations of the Virgin Mary from countries around the world. The artwork from the United States is the only one in which she’s pregnant. It’s striking.

We happened to arrive early for Mass, and had extra time to wander about at our leisure. The bishop had earlier told us that even though we can’t take communion in American Catholic churches, we’d be welcome here, and we were.

The service was mostly in Arabic, but Father Usama did welcome us in English. The language didn’t matter. We were able to follow its rhythm, and feel fellowship with our Palestinian brothers and sisters. They sang the Christmas hymns in Arabic; we sang in English, and it was all very lovely.

Our next stop was the nearby Nazareth Village, a careful reconstruction of what a first-century village would look like. We met sweet people dressed in costume. Two important events took place in Nazareth, our tour guide told us: the angel Gabriel appeared to Mary, and Jesus read from the scroll as a 12-year-old in the temple.

We saw ancient olive trees, an olive press and a wine press. We crowded into a small house, where we met Joseph, dressed as a carpenter, and Hannah, his sister, who weaves wool gathered from the sheep onsite.

“Our house is so small,” she said, “but our hearts are so very big for you!”

That evening, Marion Bish said that sitting among the Palestinian women in the congregation had been a holy moment for her.

“This lovely lady took my hands and she said ‘Welcome!’ three times,” Marion said. “She came all the way around the pew to share hugs and give the peace. She was making a point to reach out to us. There really wasn’t a language barrier. These ladies didn’t speak English, but they wanted me to know they were glad I was there. I thought about them all day.”