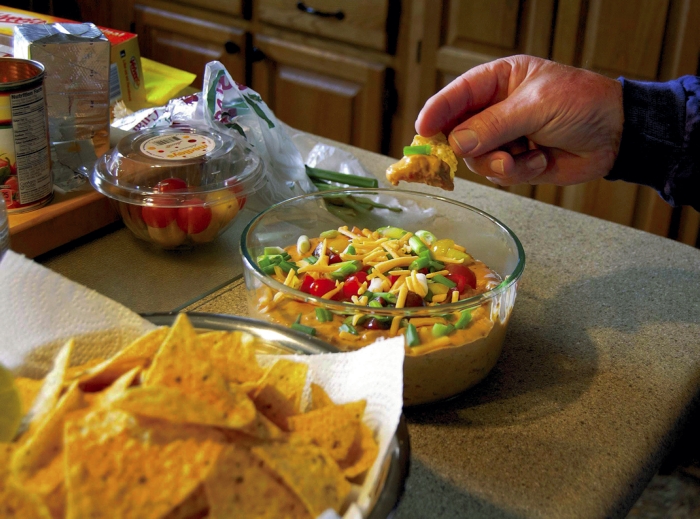 Casual, comfortable and a little crazy is how Beth Meadows likes her parties.

She has a Super Bowl Party every year and has figured out several strategies.

“I have two TVs. The people who want to watch the commercials go in that room,” she points to the living room of her ranch-style house, which has been added on to.

“The other room,” and she points to a den on the opposite side of the house, “is for the football freaks so they can talk and fuss and scream” while the commercial watchers wait for the next break.

In between is her kitchen, with a central island that contains her cooktop. She’s making two of her easy dips today, and is keeping it simple — two pans, two bowls ready for dip and a bowl of chips.  She’s efficient.

“This here is the Buffalo chicken dip,” she says, stirring a small saute pan containing cream cheese, which is beginning to melt. “Over here, I have the cheese dip. It’s not the old boring Velveeta and Rotel. That’s good, but this is better.”

She has added Chorizo sausage and salsa to her Velveeta.

“Now we add the chicken,” she says, tossing a can of white meat chicken, drained, into the cream cheese, Using a spatula, she stirs the two ingredients together.

She’s in a particularly good mood this sunny Saturday, because she and her partner of 25 years, who were married Jan. 15, recently had an anniversary.

Meadows is a food broker, who explains her job like this: “Everything that’s on the perimeter of the grocery store I provide, except produce. Produce is hard because it has such a short shelf life.” She says, “I sell groceries to people who got to eat.”

She knows food. She know what goes together and she loves to cook, especially for a crowd. She’s invited 60 people to her Super Bowl party. “I’ve heard from about 30, but I’m sure more will show up.”

Who is she pulling for? “Well, I’m a big Carolina (Panthers) fan. I was with them from the beginning. Now, we had a bad year, but we’re going to get back there” to the Super Bowl. “We got a bunch of young bucks, and they’re going to learn together.”

The short answer is, she doesn’t care who wins.

Now it’s time to stir a half cup of hot sauce into the chicken and cream cheese. She plops in some Frank’s Red Hot, a little Tabasco, and gives it a taste. “No, not there. I know what I’ve got …” she reaches into the fridge, “Sriracha! That’ll make it good.” another stir, another taste. “Yeah, that’s it.”

And it’s hot, sure enough. Hot and creamy.

“OK, time to get the cheese in a bowl. She stirs the concoction, which has been warming in another pan. She has a favorite brand of chorizo, Olé Mexican Foods. It comes in short, sausage-size links.

And she’s found a different salsa on the shelves at Harris Teeter, Morita Chile, which has a smoky flavor.

Here’s a tip on the chips: She had some chips at home, but they were a little stale. She sprinkled them with salt and fresh lime juice and popped them in a 350 oven for about 10 minutes to refresh them.

Dipping a chip into the cheese dip, she decides it’s pretty good as is, but then drops in some hot sauce, for good measure.

She tops the bowl with halved cherry tomatoes, scallions and some shredded cheddar. She tosses some cheddar on the Buffalo chicken, too.

She says she has to have wings at a party like this. Meadows bakes her wings, then finishes them on the grill, instead of frying.

She’ll put out other dips and even some veggies for those trying to be healthy.

She’s been doing Super Bowl parties for 19 or 20 years. An ice storm broker her record. “We always have a good time.”

At half-time, she serves hot dogs with homemade chili.

It’s not just hot dog chili, either, it’s the beef and beans variety. She uses a mix of ground beef and pork, browns the meat, adds “lotsa onion and peppers, then salsa and then beans, pinto or kidney, whatever I have.” She adds “lotsa chili powder, cumin, hot sauce and cayenne. I make it different every time, that’s how you do with chili.”

She says that’s the key to cooking, “Take it easy and don’t worry so much about the rules.” You have a little more or less of an ingredient, it will work out.

“I love cooking” Meadows says. “I do it all the time.”

Some of her favorite dishes are New Orleans Barbecued Shrimp, “but that takes a while” and Teriyaki Chicken and Beef. “That’s awesome, but it takes a while, too.”

She has a game plan for parties. She makes a list of when to do what in the kitchen and elsewhere. “The food comes first, then everything else.” She’ll start Saturday cleaning house and washing the dogs. On Sunday, she starts cooking. Guests begin to arrive around 4. Half-way through the second quarter, she starts her hot dogs on the grill.

Because she’s a food broker, she always has samples of sweet stuff in the freezer, like brownies, cookies, macaroons. One year she saved up some Wendy’s coupons and got 20 mini Frosties.

Last year, she also had dress up for the Super Bowl. She puts makeup and paint, wigs, hats, beads in a bathroom and everyone dresses up.

Entertaining just comes easily to her.

She points to words written above a kitchen door. “Here’s my motto.” It reads “The fondest memories are made when gathered around a table.”

Melt the cream cheese and butter over low heat, then add the chicken and hot sauce and stir to combine. Serve with tortilla chips. You can use a combination of your favorite hot sauces to make 1/2 cup. Meadows uses Frank’s Red Hot, Tabasco Jalepeno and sriracha.

1 can Rotel tomatoes (with chilis)

Brown the chorizo and drain any fat. Add the cheese, and let it melt. Add the the Rotel and salsa. Serve with tortilla chips or multigrain crackers for those going gluten free. Top the dip with halved cherry tomatoes and sliced green onion, with a little sprinkle of shredded cheddar cheese. Meadows tried Morita Chile, an HT Traders brand of salsa with a smoky flavor.

For her chicken wings, she sprinkles them with seasoned meat tenderizer, bakes them in a 375-400-degree oven for 35-40 minutes, turning once, then put them on the grill. She puts barbecue sauce on some wings and leaves others plain.

Trip to the Holy Land Day 3: A complicated…