In Forest Glen, chili heats up 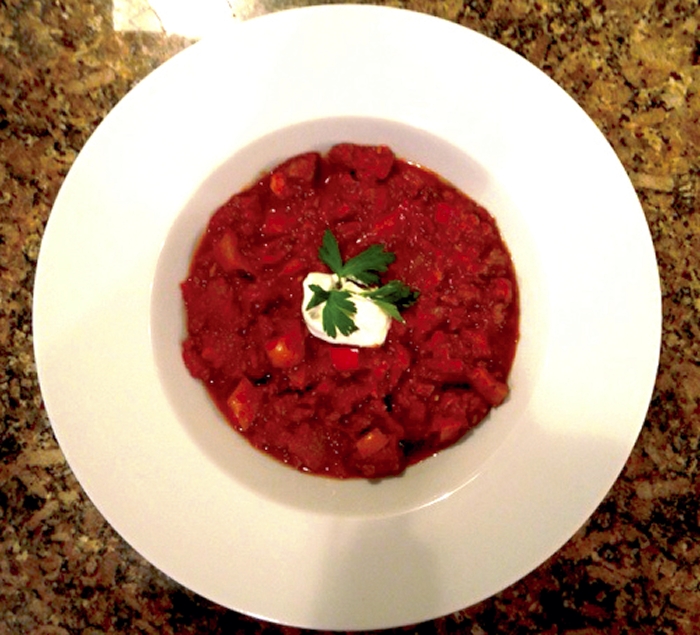 Thanks to first-place winner Johanna Lovvorn, we have some new chili recipes to try. With a cold week ahead, capped off by the Super Bowl on Sunday, it seemed like a good time to share.

Lovvorn won first place in the first-ever Chili Cook Off at the Forest Glen neighborhood clubhouse. She wrote that 10 serious competitors submitted 11 chilis  for tasting and judging by all who  attended.

Contest entries were varied and included vegetarian, chicken and venison chili, in addition to traditional beef chili. Four winners were announced once tastings were complete and all of the votes were cast.

Third prize ended in a tie and went to Gary Graham and Devin Phipps for their beef and beef and sausage chili. Second prize went to Adam Baird for his venison chili and first prize went to Lovvorn, who entered an Italian beef, chicken and turkey chili.

2 jalapeños, diced (I remove most of the seeds)

Heat the oil in a deep pot over low heat. Add onions, garlic and cook until just wilted, about 5 minutes.

Raise heat to medium, and crumble in beef.  Stir frequently to break up and cook until meat is well browned. Once browned, add soy crumbles and cook 5 minutes.

Crush whole canned tomatoes into pieces  (I use kitchen scissors to do that). Remove pot from heat, and stir in all canned tomatoes, wine, parsley, tomato paste and all herbs and spices.  Do not add fresh tomatoes yet.

Add fresh tomatoes and chopped parsley and let cook on low another 2 hours.

Great the first day, but even better the following day.  It makes a lot, so I usually freeze half. Freezes beautifully.  This recipe has won first place lace in two chili cook offs.

Brown venison or ground meat, add all ingredients and simmer in a slow cooker or on the stove all day.

This recipe came from Adam’s grandmother, the late Virginia Lee Baird).  The venison used was from a hunting trip in southern Missouri, at The Baird Ranch.

Two 28-ounce cans of whole tomatoes, chopped, with their juices

Combine the ground chuck, sausage, onions and garlic in a Dutch oven.  Cook over medium heat until the meat is browned; stir the meat to break it up as it cooks.  Drain off the pan drippings.  Stir in chili powder, flour, sugar, oregano, and salt; stir well to mix.  Cover and simmer for 1 hour, stirring occasionally.  Add tomatoes, beans, and simmer for 20 minutes longer.

Recipe comes from the Lady and Sons restaurant in Savannah, Ga.  This is our family’s go-to chili recipe.  For many years, we have hosted a pre-Thanksgiving get together for family following the annual Holiday Caravan Parade.  You can always count on this chili recipe to be part of our festivities.

Heat the oil in a large stock pot just until smoking. Add the ground beef and sausage crumbles. You may want to do in batches depending on size of stock pot. Drain almost all of the grease, reserving a small amount, and remove the meat, letting it rest on a plate. Using the reserved grease, sweat the garlic, onions and diced peppers for approximately 5 minutes. Add the meat back into the pot and add the coriander, cumin, cinnamon, paprika, tomatoes and beans. Once the spices have mixed well with the meat, add in the chicken broth, beer and cup of coffee.  Let simmer for about 2 hours then heat a separate pan over moderate heat and take two cups of the chili broth and add to the heated pan, then whisk in the cornmeal and chocolate and simmer for about 3 minutes and then add back to the pot. Let the chili simmer for another 20 minutes then it is ready to serve.