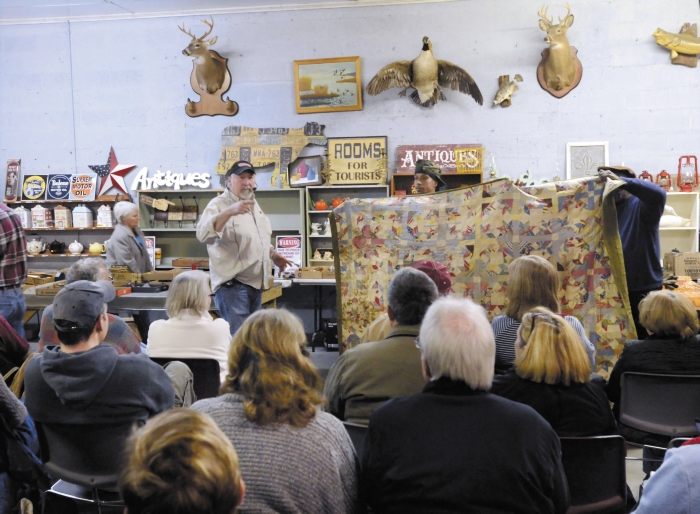 If you’re looking for a little excitement and the chance to get your hands on something cool, old and different, you might want to go to an auction.

That was the scene Saturday when people came out to an “old-timey” auction downtown. Auctioneer Greg Wagoner ran the show. He holds auctions every other Thursday at the building he leases on the 400 block of North Lee Street.

Saturday’s auction was different from what he normally does, Wagoner said. He called it an “old-timey” auction since people sat in chairs and items were bid on one at time.

He said the real action is on Thursdays when around 100 people will come out. Tables filled with items are set up inside and outside, and Wagoner said people stand at tables that have items they want as he moves from table to table to work the bids.

Originally from Kannapolis, Wagoner has been in Salisbury for over 20 years and has been a licensed auctioneer for 4o years. It’s been his career, he said, adding he used to run an antique store.

He used to hold auctions every Thursday except for Thanksgiving, but changed it to every other week because it was too much work.

He posts information about his auctions online at auctionzip.com and places ads in the newspaper.

Wagoner said he thinks the Internet has helped the auction business, but that opinions on the matter differ among auctioneers.

“My business has gotten better,” he said. “A lot of my better buyers are Internet sellers,” meaning people who buy items at his auctions and then sell them online.

He enjoys the job because he meets a lot of people and is able to help them.

Wagoner normally gets 20 percent of the sales at his auctions. He normally doesn’t charge a buyer’s premium.

Lisa Brantley of Rockwell was the cashier Saturday. She said she enjoys the environment and the different characters who come to auctions.

“Once you start bidding you get addicted,” she said.

There are a lot of regulars at his auctions, Wagoner said. People come for the atmosphere, conversation and action.

Before the bidding, people mingle around looking at items they might want to bid on. A few minutes before the auction begins, Wagoner gives instructions and a little information to the crowd. He wears a mic that is hooked up to a PA system.

People sign in by showing their license, and they get a ticket with a number on it. Regulars can use the same number at different auctions.

Chuck Britton was at the auction with his wife Judy. The couple is from Statesville and go to auctions often, they said. Chuck usually looks for toys and said he enjoys watching the action and said it’s good entertainment.

“You don’t have to spend money unless you want to,” he said.

Judy was hoping to get some antique sewing items. To pass the time, she brought a sewing kit with her.

Saturday’s auction was made up of items from an antique store that’s been closed for years and a few other consignments. At least 60 people came and went.  There weren’t enough chairs, so people sat on folding tables or stood.

There was a lot of glassware, toys and quilts up for grabs. The variety of items ranged from porcelain signs to old Air Force uniforms. Cheryl and Joel from Matthews studies the scrapbook being held by Autioneer Greg Wagoner at Antiques and Collectibles Auction sale on Saturday. Photo by Wayne Hinshaw, for the Salisbury Post

Things move quickly once the bidding starts. Wagoner has assistants who bring him the items, which are organized into “lots.”

He gives a brief description of each item and then begins the action by saying the starting bid price.

People bid by holding up their ticket. Once a bidder is in on an item, a simple nod, or shake, of the head signals to the auctioneer his or her intentions.

Like a group of poker players, each bidder has his or her own unique style and technique, which makes things interesting to watch.

When bidding, Wagoner speaks quickly in that classic auction style. He says the current high bid followed by the price that would be new high bid. Depending on the item and how hot the action is, he raises bids by a single dollar or as much as $5.

If nobody bids on an item, Wagoner will drop the initial price and sometimes comment on the item to entice bidders.

There was no action on a set of glassware until Wagoner said, “This stuff will last forever.” A few seconds later the set was sold.

When a bid is won, Wagoner calls out the winning bid and the person’s ticket number. An assistant, who has to pay close attention and keep up with the action, records the price and ticket number along with a brief description of the item, for each bid.

Assistants keep busy by taking items to winning bidders and bringing new ones up to the front. They also help Wagoner by pointing out bidders.

Angie Childs, from Granite Quarry, wasn’t looking for anything particular. If there is something she thinks she can resell, she’ll bid on it, she said.

When she wasn’t bidding, she scrolled through Facebook on her tablet.

Lee Dupre said he has been helping Wagoner for a couple of years. A former farmer and truck driver, the 72-year-old said he likes to hang out and pass the time by talking to people who come to auctions.

“I’m proud of what we do in this business,” Wagoner  said.