College Basketball: Bubbles Phifer is back in form 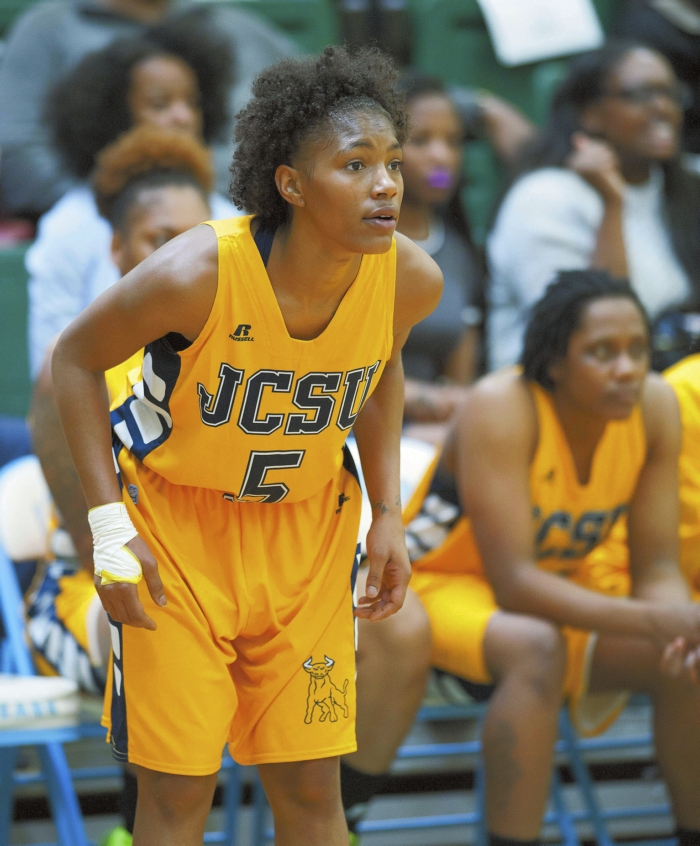 SALISBURY — Saturday was a homecoming for Johnson C. Smith guard  Shanequa “Bubbles” Phifer, but she was determined to treat her team’s visit to Livingstone as just another game.

“I kept telling myself to just stay calm and play,” Phifer said. “I’m not saying it wasn’t hard, but I stayed very calm.”

Dr. Windsor Eagle, Phifer’s principal during her days as a star at Salisbury High, watched from the wall behind one of the goals at New Trent Gym. He didn’t have to scold Phifer for nervousness. She stayed so calm that she hit five 3-pointers and scored 20 points. She nearly led the Golden Bulls (15-4)  to a an upset of the undefeated Blue Bears, but Livingstone prevailed, 78-74.

Phifer played with a bandaged hand that she hurt Saturday, but she launched beautiful, arcing shots from downtown. She still elevates her 5-foot-7 frame over taller defenders and still has a quick release.

“I think my shot is just starting to come back to where it used to be,” Phifer said. “It’s taken a lot of work.”

A lot of work doesn’t begin to tell the story. Phifer is making her comeback as the mother of a 10-month-old son.

The junior hasn’t competed since the 2011-12 season, so it’s remarkable that she’s among the CIAA’s top 3-point shooters. She’s 10-for-22 from long range in her last two outings, evidence that her shooting form is returning.

Phifer was an electrifying high school player, competing for Salisbury teams that went 112-9 for three different head coaches — Jennifer Shoaf, Dee Miller and Andrew Mitchell. Her junior and senior seasons, the Hornets won 2A state championships, and her senior year they went 29-0. Phifer was Rowan County Player of the Year as a sophomore and senior and ranks fifth all-time at Salisbury with 1,361 career points.

Phifer was a great shooter but also a great defender. She won games for the Hornets with 3-pointers, but she also won them with steals and layups. Phifer had Division I feet and a Division I shot but lacked Division I size.

Her next stop was Tallahassee Community College, in Florida’s competitive junior college circuit. She was the same player there she’d been at Salisbury. She played every minute of every game and was first team all-conference in 2010-11 and 2011-12.

She may have been the Panhandle Conference’s finest player as a sophomore, averaging 16.7 points, 3.2 rebounds, 3.2 assists and 3.0 steals per game.

Charlotte’s Johnson C. Smith was next, a move that brought Phifer back close to home, but there were obstacles.

“I had to sit out that first year because all my credits weren’t accepted when I transferred,” Phifer explained. “And then the next year, I had a baby.”

After Phifer gave birth to her son,  Savon Phifer, there were people who told her basketball was over for her. But instead of looking at it as the end of something, she’s embraced motherhood as a new beginning. She says her son is the best thing that’s ever happened to her.

But she worked through it.

J.C. Smith’s first game this season, back on Nov. 14, was an exhausting bus trip to Pennsylvania to play Shippensburg. Phifer bounced off the bus and made six 3-pointers, and the Golden Bulls knew they’d added an important player.

There have been ups and downs. Phifer had a cold, four-game stretch earlier this month where she made only two of her 23 3-point attempts, but she’s rediscovered her stroke now.

She’s averaging 8.4 points a game and ranks seventh in the CIAA in 3-pointers made with 34. She has 32 steals and 30 assists.

A lot of people hugged Phifer Saturday as she carried her son up and down the hallway outside New Trent Gym. Her life has changed, but some things don’t change. She’s still quite a basketball player.

And she still prefers her childhood nickname of “Bubbles” to “Shanequa,” her official roster name.

“Oh, everyone still calls me Bubbles,” she said. “I’ll always be Bubbles.”