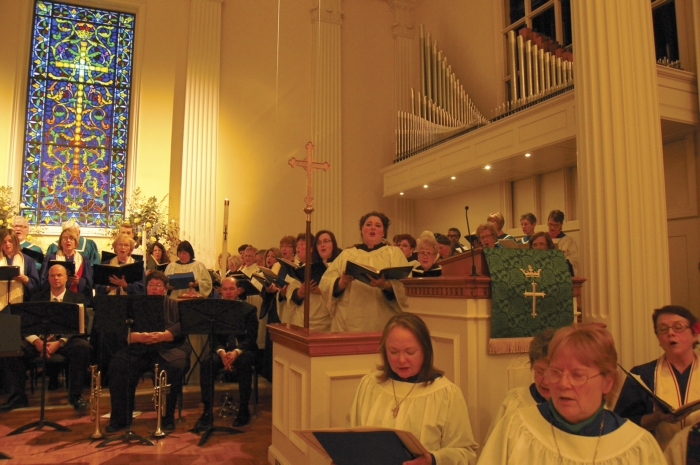 The choir for the unity service was made up of members from several different churches in the community.

The message may not have been what the congregation was expecting to hear Sunday night at First United Methodist Church in Salisbury, but it’s a safe bet they won’t forget it anytime soon.

During a Christian Unity service, people from churches across the community, and anyone who wished to attend, celebrated and rejoiced.  Several church leaders spoke, and the choir, composed of vocalists from multiple churches, put on quite a show.

Reverend André Resner, professor of homiletics and church worship at Hood Theology Seminary, delivered the sermon. He asked the congregation to question the wisdom of traditions that have been passed down and to think critically about how we establish our relationships in society.

He started by referencing a Robert Frost poem, “Mending Wall,” about two neighbors coming out after the winter to mend the wall that separates their properties.

“Something there is that doesn’t love a wall. That wants it down,” the poem reads.

What is this definition of a good neighbor that requires us to separate ourselves from each other? Resner asked. Why do we follow these traditions that are passed down and what is that something inside of us, as Christians, that makes us question tradition.

Christianity calls on us to deconstruct the barriers that have arisen between us, Resner said.

“Those things must come down,” he said.

Jesus was against the status quo, Resner said; he wanted to deconstruct the power structures of his time.

We keep reverting to “my ways and my thoughts,” Resner said, but they conflict with the gospel.

“Something has to change in our thinking,” he said, asking how do we change our perspective on the world.

He mentioned that Jan. 25 is national Opposite Day.

What would it look like for the Church to hop the wall of division, to jump from this world’s ways of doing business to God’s side? Resner asked.

For the most part of the Church’s history, and the present, we’ve conveniently chose against the visions of the gospel and opt instead for the same old predictable world, he said.

Resner said, “What if the perpetual problem with the Church and the world in its failed attempts at true unity is that it keeps selling out its inherently opposite vision of reality to much smaller, much more this-worldly visions.”

“Those smaller visions always make better sense to our world, but they may compromise, I suggest, the very heart of who we are as the Church of Jesus Christ.”

If we jumped to the other side of the wall, we would be less religious and more just, Resner said. Justice, and mending social disparities, would come first in the Church on the opposite side of the wall — on God’s side.

He said in an opposite world, the bottom line of the Church wouldn’t be about crunching numbers: money in the plate and bodies in the pews.

Resner said the survival of the Church is none of the Church’s business. It must stand up against injustice and atrocity even at the risk of its own survival — just as Jesus put his life at risk, and sacrificed it, to do the work of God.

Finally, Resner said, the Church must restructure the way it thinks about power.

“It seems to me that the Church has done exactly what the world does in the way that it structures power. And yet, when I read the gospels, I can’t help but see that Jesus was doing everything in his power to turn that model upside down,” he said.

Would one of our cultural icons of success, such as Donald Trump, approve of how Jesus went about his business — or would he “fire” him?

Jesus came to serve, not to be served, Resner said.

When the gospel is alive in the world, it turns the world upside down, he said.

“May we, as the Church of Jesus Christ, take the risk of embodying that word in this community.”

A pilgrimage to the Holy Land