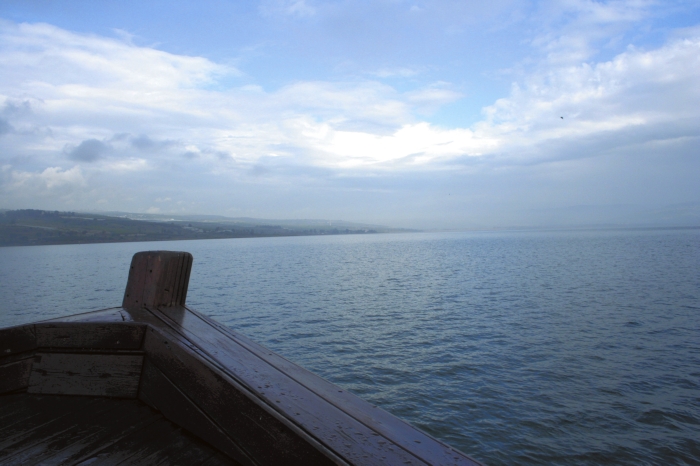 The storm that had suddenly blown up during our Holy Eucharist at the Church of the Beatitudes had cleared in time for our boat ride on the Sea of Galilee. Susan Shinn, for the Salisbury Post.

Editor’s note: This is the second in a series by freelance writer Susan Shinn on her recent journey to the Holy Land with a group from the North Carolina Lutheran Synod.

“One day, he got into a boat with his disciples and he said to them, ‘Let us go across to the other side of the lake. So they put out, and while they were sailing he fell asleep. A windstorm swept down on the lake, and the boat was filling with water, and they were in danger. They went to him and woke him up, shouting, ‘Master we are perishing! And he woke up and rebuked the wind and the raging waves; they ceased, and there was a calm.”

We had a rainstorm during the Holy Eucharist by the Sea of Galilee. It stopped just in time for our boat ride across the surprisingly small body of water. And if that weren’t enough, God sent us a rainbow at lunch — not just any rainbow, a double rainbow.

I suppose God sends us signs every day, but we probably miss a lot of them. We didn’t miss this one.

After lunch, we went to Ginosaur to see a first-century fishing boat that had been discovered. It’s lovingly known as the “Jesus boat,” and it’s the type of vessel our Lord would have used during his ministry in this area.

We also visited the Church of the Primacy of St. Peter. This site is in commemoration of the charge by Jesus to St. Peter to feed his flock. St. Peter became the Catholic church’s first pope, and Pope John Paul II visited this site in 2000.

Many of our pilgrims took time to take off their shoes and socks and wade into the water. I picked up a handful of tiny shells on the shore. Others took small pebbles to remember the visit. Jesse Canniff-Kuhn, one of our seminarians, expertly skipped rocks across the surface.

This was the day I absolutely fell in love with a clergy couple from Asheville. Pastor David Eck serves at Abiding Savior, Fairview, while Pastor Gary Mitchell is minister of music at First Congregational United Church of Christ in Asheville.

David coined what I began to call our “holy moments” during the trip. For him, his holy moment was rolling up his pants legs and walking into the water.

“The connection to Jesus was so strong with water and baptism,” he said. “It was just a perfect moment for me. So many of his stories take place in this area. This was number-one on my list.”

“Jesus went on with his disciples to the villages of Caesarea Philippi; and on the way he asked his disciples, ‘Who do people say that I am?’ And they answered him, ‘John the Baptist; and others Elijah; and still others, one of the prophets.’ He asked them, ‘But who do you say that I am?’”

This was not the best day for me as I’d suffered a horrific migraine the night before. Pastor Beth Kearney’s husband, Pastor Doug Kearney, had brought along some Excedrine Migraine, which he gladly shared with me, but even that didn’t touch it much. Adrienne covered me up with my hot pink airport blanket as I lay on the bathroom floor, waiting for it to pass.

The next morning, everyone was extra solicitous to me. Already, I’d found we were an extremely caring and collegial group. Everyone listened to Dr. Luker’s instructions and was on time to the bus — this trend would continue the remainder of the trip.

Migraine or no, it was another busy touring day. On our itinerary were not just New Testament sites where Jesus had been, but Old Testament sites, which helped give additional context and meaning to what we were learning.

Tel Hazor dated to the Bronze Age and Iron Age. On our handy-dandy bookmark Dr. Luker distributed, the Iron Age was in 1200 BCE, during the time of the Judges in the Bible. The city was burned by Joshua, but resettled about 150 years later.

Here we saw a ninth-century water system, and an ancient olive press. Dr. Luker explained that cities during this period needed three requirements: height, a water source and a wall or defensive line, all of which Hazor had.

Our next stop was a hike through Tel Dan Nature Reserve. Unfortunately, recent rains had made the path muddy and slippery.

However, I noticed something interesting during the hike. Many of the seminarians began helping the older members of our group along the way. We ranged from our 20s to our 70s, so I was pretty solidly in the middle, although I was happy to take seminarian Adam Carnell’s hand for the majority of the walk.

Along the way, we saw a 10th century shrine, and a rusted tank from the 1967 war. Standing on a high hill, we could see Lebanese towns in the distance, although Dr. Luker told us the dirt road down below was still littered with land mines. Farther along, we saw a Canaanite gate through which Abraham and Sarah may well have passed. It is one of the world’s oldest complete arches, and seeing it was a highlight for Beth.

On this day, we also saw the Gates of Hell, a giant, gaping cave, in front of which Jesus asked his disciples, “Who do you say that I am?”