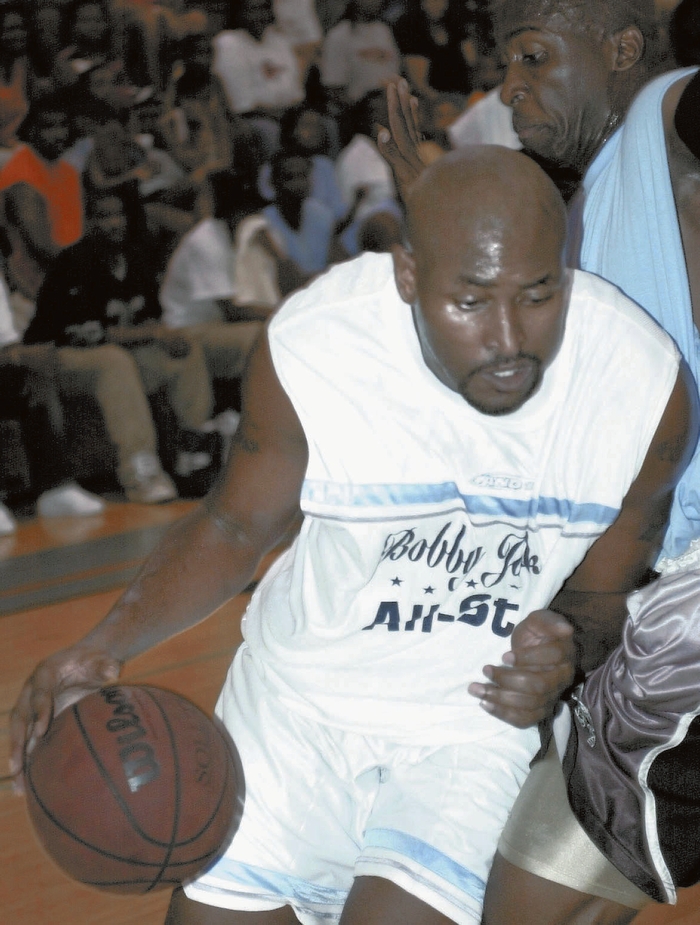 Marvin Dixon shown in this file photo from 2002, playing in the Bobby Jackson All-Star game at Livingstone College.

CONCORD — Graduation from Salisbury High was almost 21 years ago for Marvin Dixon, but he’s thrilled to be back in school.

In January, Dixon became both a student at Concord’s Barber-Scotia College and a student assistant basketball coach. That’s an unusual dual role for a 39-year-old, but it makes sense when you look back at where Dixon has been and where he wants to go.

“The goal is to get a college degree, so I can get into college coaching,” Dixon said. “My cousin Larry (Dixon) is the one who inspired me.”

Larry Dixon, a North Rowan graduate who is a couple of years older than Marvin, is an assistant coach at Georgia Southern.

Marvin Dixon  saw the world, not by joining the U.S. Navy, but by being an exceptional 6-foot-7 basketball player. Along the way, he accumulated a ton of hoops experience.

“I’ve got knowledge to pass on to the younger guys,” Dixon said. “About basketball and about life.”

Dixon played only two varsity seasons at Salisbury for coach Sam Gealy, but scored 698 points. He averaged 11.5 points as a junior in the 1992-93 season.

As a senior in 1993-94, he and future Western Carolina star Bobby Phillips were a tremendous scoring duo, and the Hornets compiled a 20-8 record. Dixon and Phillips combined for 54 points in the season opener against East Rowan and went on from there.

In a game in the 2A state playoffs against Newton-Conover, the duo combined for 59. Dixon had a career-high 32 points that night — and 15 rebounds.

Dixon signed with Division II Johnson C. Smith because of the recruiting efforts of a young assistant coach named Andrew Mitchell, who needs no introduction to Rowan County hoops fans. Earning playing time was no problem, but finances presented obstacles in his second year at J.C. Smith.

Dixon left the Charlotte school. His next stop was Odessa, the junior college in western Texas that Larry Johnson had used as the springboard to a national title at UNLV and NBA stardom. The thinking was that Odessa would lead to Division I offers.

After Dixon averaged 12 points, 10 rebounds and a league-leading four blocks for a strong 1996-97 Odessa team, offers poured in.

After eliminating Utah, North Carolina State, Florida and St. John’s, Dixon’s  finalists were Xavier and Cincinnati. He picked Bob Huggins and the Bearcats, and the Cincinnati Enquirer enthusiastically reported his signing on April 14, 1997.

Dixon had to finish the school year at Odessa, and then he was supposed to report to Cincinnati for informal workouts with his new teammates. Unfortunately, something called the Texas Academic Skills Program test interrupted.

Dixon had a 3.2 GPA  but he still had to pass  all three parts of the TASP before his Odessa transcript could be sent to Cincinnati. He did fine on the reading and math but came up a bit short on the writing skills portion of the test. His scholarship to the big-time was revoked on the roughest day of his life.

He stayed in his room in Salisbury and cried for a week. His parents and a call from Huggins got him going again. Huggins encouraged Dixon to find another school.

That school turned out to be Pfeiffer. Dixon played for the Falcons, but there were opportunities to play pro ball overseas and Dixon put finances and basketball ahead of finishing his degree work.

Dixon experienced quite a pro basketball journey overseas, wearing the uniforms of the Konisberg Miners in Norway, the Belfast Star in Ireland and Penarol de Mar del Plata in Argentina. He played in Israel and he played in Australia.

“I enjoyed Australia the most because it was so Americanized,” Dixon said.

In the “it’s a small-world category,” both Dixon and his younger brother, Carlos, who starred at South Rowan and Virginia Tech, would  play, at different times, in the same league in Argentina  — for neighboring teams that were huge rivals.

Dixon also played in several professional minor leagues back home in the states, teams with exotic names like the Macon Blaze. He coached the Greenville Galaxy in the Atlantic Basketball Association.

Dixon’s passion after his playing days was training and developing youngsters to play basketball. His ultimate  dream was to coach college basketball, but as his cousin, Larry, kept telling him, that door would only open if he got a degree.

That didn’t appear to be a realistic possibility, but then Dixon, who lives in Kannapolis, met Salisbury resident Dr. David Olah, the president of Barber-Scotia.

“I told him there were two things I really wanted   — to get my degree and to coach college basketball,” Dixon said. “He said I might be able to do both at  Barber-Scotia.”

Dixon said that because he’s been out of school for so long, most schools would not accept the college credit hours he’d accumulated in the 1990s. Barber-Scotia wouldn’t transfer all those hours, but it was willing to transfer most of them.

“Barber-Scotia has made getting a degree in 2016 a realistic goal,” Dixon said. “It looks good.”

Last semester, Dixon put the Barber-Scotia athletes through workouts. When the new semester began, he became a student at the school and officially became an assistant basketball coach.

Barber-Scotia’s Mighty Sabers have a proud hoops tradition that Dixon hopes to help rebuild. The program scheduled a wide range of opponents this season and has played schools such as Pfeiffer, Chowan, Winston-Salem State and N.C. Central.

Dixon has matured a lot over the years. He’s had his setbacks, but the future looks bright, and he has many  good teaching years left in basketball.

“I haven’t been in a classroom in a long time, but it’s going well,” Dixon said. “This is a great opportunity.”