Old is new again as vinyl records grow in popularity 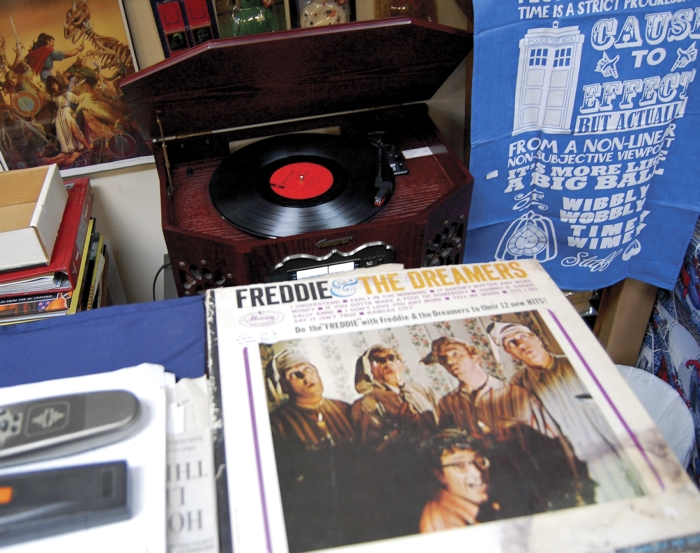 The 1960s English rock 'n' roll band Freddie and the Dreamers plays on the record player at Collectivity in downtown Salisbury.

Trends come and go. Some last longer than others. Some change shape and style but never really leave.

Music is something that has always been a part of society. What’s changed is how we listen to it. And an old way of listening to music is creeping back into the mainstream.

Vinyl records are becoming popular again among an older generation that longs to remember, and experience, music like the big bands of the 1940s and the rock “n” roll of the 1950s and 1960s. But younger people are also gaining an interest in what, for them, is a new way to listen.

Today, the vast majority of music is listened to digitally, whether on a computer or on gadgets such as an iPhone. Sales of digitally downloaded songs are falling while streaming music over the Web is quickly becoming the dominant method people use to hear their favorite tracks.

In most cases, streaming services, such as Spotify and Pandora Radio, don’t require people to pay. Instead, advertisements occasionally interrupt the listening experience.

But the sale of vinyl records — vinyl is the synthetic material records are made of — is growing at a tremendous pace. The annual report from the ratings agency Nielsen on the music industry shows vinyl-record sales increased 52 percent from 2013 to 2014. And 2013’s sales were 33 percent higher than in 2012.

Over at Collectivity, a collectors store on West Fisher Street near Go Burrito, Norden Fairley III, who goes by H.N., said part of the reason vinyl is coming back is “nostalgia.”

He said older people are longing to remember their youthful days, and what better way to do it than listening to records of groups like The Doors, The Who, or Freddie and The Dreamers. And, of course, The Beatles.

Collectivity has around 1,500 records. Fairley’s son, H.N. IV, runs the business full time now, but his father spends plenty of time there.

“We’ve sold more albums in the last year and a half then we have since we opened up the store,” he said. The Beatles’ Second Album sits on a shelf in Collectivity on Fisher Street in downtown Salisbury. The collector’s store has around 1,500 records.

He said records by classic rock groups are real popular right now along with classical and big-band music.

It’s not just about the music. People buy and collect records for the artwork on the album’s cover too. And when it comes to pricing, it’s all about the condition the album is in, the Fairleys said.

Album prices vary dramatically, from a few dollars to several hundred or even thousands of dollars.

On the shelf at collectivity, The Beatles’ Second Album had a price tag of $100.

Scoggin is in his early 30s and was collecting records for years before opening the store.

He has a large variety, from R&B to folk music. One album on the shelf was the soundtrack to the film Grease — a 1978 musical based in the 1950s starring John Travolta.

Scoggin said he had collected around 10,000 records before he opened the business in late 2013 and started selling his vinyl. He sells other items, such as CDs and incense. A poster of Bob Dylan hangs on the wall in the back room of Crossroads.

He said new artists and bands are selling their music in record format to try and find an audience in the huge landscape that is the music scene. He said new record albums often come with a CD or a digital-download card.

Scoggin said that since Christmas, most of his customers have been high-school kids buying records of artists they’re listening to on Rock 92 radio.

For kids who grew up with modern technology being the standard, listening to music on a vinly record is new and interesting, Scoggin said.

He said it used to be just “hipsters” buying records, but now the trend is spreading. He also gets a lot of guys in their 50s and 60s coming to his store looking for old records.

Scoggin got into vinyl when he was a freshman at Appalachian State University in late 1999 and early 2000. He came across a record album by The White Stripes and thought it was cool.

Both Scoggins and the Fairleys said better sound quality is another reason people are coming back to vinyl.

Records are  “a more accurate reproduction of the sound,” Scoggin said. Kevin Scoggin, owner of Crossroads, talks on the phone inside his music store. He said he had collected 10,000 records before he went into business and started selling them.

Jay Burcham was in Crossroads looking for records.

Born in 1977 and living in Greensboro, he said he’s always been into music and got back into vinyl three years ago. He and his buddies like listening to and talking about old records.

Burcham is into jazz and classic rock. He said the sound is better on a vinyl record, but that you have to acquire an ear for it.

It was his first time in Crossroads, and he said Greensboro has a number of places, like Hippo Records,  that are selling new and old records.

But will the trend last?

Scoggins said he wasn’t sure, but even if the current popularity dies down, there will always be collectors, he said.

Fairley III said, “There is always going to be a place for records.”