Artist on the run: Frank Selby prepares for Charlotte ballet, show in L.A. 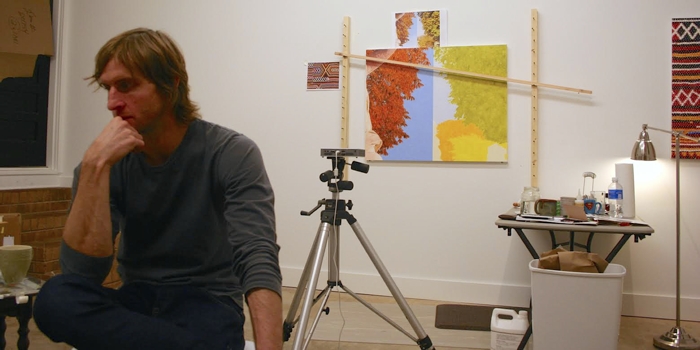 Frank Selby has choreographed a ballet that premieres next Friday in Charlotte. An art show opens next Thursday in L.A. He hopes all his flights will be on time. Susan Shinn/For the Salisbury Post

Frank Selby is not sleeping much. By day, he’s rehearsing a ballet that premieres next Friday in Charlotte. By night, he’s laboring to complete artwork for a show that opens next week in L.A.

This past fall, Frank, 39, was part of a residency at the McColl Center in Charlotte, in which he collaborated with Charlotte Ballet’s Sasha Janes to create a 14-minute piece for the Innovative Works series. Four of the series’ five pieces will be performed each night, with Selby’s production slated for Jan. 30-31, and Feb. 6, 13 and 20-21.

He rehearses twice weekly with the ballet company, then paints the rest of the time at his garage studio of the Salisbury home he shares with wife Jen, 35, and their daughter, Vivian, 3.

Attired in a green Ariel princess dress, Vivian runs barefoot circles through the kitchen, dining room and foyer, while her parents calmly discuss artwork in the kitchen, Jen making a cup of tea, Frank brewing a pot of coffee for another long night of work.

Before long, Vivian asks for some milk and quiet time in her play room, and Frank saunters out to the studio.

“I’m one week away from deadline for this show, so it’s sort of a disaster,” Frank says of his studio. But really, it’s not that bad. There are a few trash bags over one window to block out particularly harsh light during the day. Jen promises there are manly curtains to be hung — they’re just not up yet.

For his L.A. show, Frank is creating seven paintings and three drawings. The paintings are all hanging in various stages of completion. In this show, he’s exploring what he calls artifacts — a cross made for Peter the Great, for instance, or details of a fountain at Versailles — and the backgrounds and materials that surround them.

He’s made those artifacts his own. He took the picture of the cross, cut it up and inverted it, so that it makes a sort of frame, with a teal background in the middle. He’s gotten bogged down in all that teal.

He’s not anxious about the L.A. opening, but the same cannot be said of the ballet premiere.

“It was a little nerve-racking for a while,” he says, “because Sasha was so busy doing ‘Dangerous Liaisons’ and ‘The Nutcracker.’ The residency came and went and it was the last week before we ever started rehearsing. It ended up changing really fast.”

Frank quickly understood the fact he had dancers lined up in a row was “going to be boring. It would have basically looked like an aerobics class.”

The company rehearsed the entire dance for the first time on Tuesday, and Frank was pleased with the results, pronouncing it awesome.

He, too, will be onstage.

“I’m not exactly dancing,” he says. “I sort of do a little routine.”

He’s been amazed at how the young dancers have picked up Sasha’s instruction so quickly. “They’re not mid-career grouches like me.”

For the next few days, Frank will either be painting, dancing or sleeping.

He glances over at one painting, which he says needs just one more layer before completion.

He’s excited about the ballet premiere, and would eventually like to choreograph a full-length production.

“I’m sure I’ll be a little nervous when the time comes,” he says. “With the art show, all I have to do is stand there and talk to people. I can do that. But you’ve gotta throw yourself a curve ball every now and then.”