A pilgrimage to the Holy Land 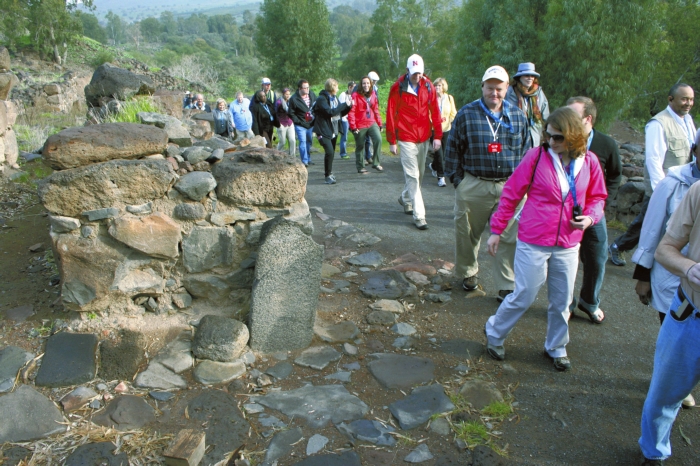 Bethsaida was where most of the disciples lived. Susan Shinn, for the Salisbury Post.

Editor’s note: This is the first in a series by freelance writer Susan Shinn on her recent journey to the Holy Land with a group from the North Carolina Lutheran Synod.

Flights to Philadelphia and Tel Aviv

Our adventure began on New Year’s Day. I’d gone to bed early the night before because clearly, it would be in poor taste to show up at the airport — in front of God and the bishop and everybody — with a hangover.

Beth and Doug Kearney arrived right on time to pick me up. They’d already retrieved Adrienne. I told Daddy goodbye at their front door and said I’d be back in two weeks. He gave me a big hug and I walked down the steps. Mother wanted to walk me out to the car, and I told her she’d have to hold it together, which she did.

The Kearneys had planned to arrive in plenty of time for our afternoon flight to Philadelphia, which we did. We had about three hours before our flight left, so that gave us plenty of time for lunch, and to relax at the gate. We began to meet our fellow travelers as they arrived. Bishop Leonard Bolick and wife Rita came from Salisbury. George and Marion Bish, Dick and Barb Flynn, and Ken Glace came from Concord.

In all, we’d have nearly 50 pilgrims from mostly North and South Carolina. Doerte Naruga, a friend of Florence Jowers of Hickory, joined us in Tel Aviv from her native Germany. Don and Ruth Klug of Flat Rock, who’d been visiting their daughter in Germany, did the same.

We had no problems on the flight to Philly, nor on the flight to Tel Aviv, which clocked in at just under 9 hours. Our bus driver met us promptly and we drove two hours to Tiberius. Let me tell you, I was pretty happy to see the Royal Plaza Hotel, perched upon a hill overlooking the Sea of Galilee. Our room was clean and comfortable, and Adrienne and I settled in for the evening.

“The next day, Jesus decided to go to Galilee. He found Philip and said to him, ‘Follow me.’ Now Philip was from Bethsaida, the city of Andrew and Peter. Philip found Nathanael and said to him, ‘We have found him about whom Moses in the law and also the prophets wrote, Jesus son of Joseph from Nazareth.’ Nathanael said to him, ‘Can anything good come out of Nazareth?’ Philip said to him, ‘Come and see.’”

Our tour guide, Dr. Monte Luker, told us to be prepared to arrive ready to go, and we were. Dr. Luker is a professor of Hebrew studies at Lutheran Theological Southern Seminary in Columbia, S.C. I will tell you unequivocally that if you ever go to the Holy Land, you need to go with Dr. Luker. He’s simply the best. He’s written a book, “An Illustrated Guide to the Holy Land,” which came with our materials, and was invaluable before, during and after the trip.

Of course, a guide is no good without a bus driver, and we hit the jackpot there, too. Our bus driver was Elvis. I am not making this up. His given name is Ahkmad Siam, but because of his love of the King, he goes by Elvis. I cannot say enough about his superior driving skills, but I’ll get to that later.

So Saturday, Jan. 3, we loaded the bus at 8 a.m., eager to begin our Holy Land excursion. We were lucky because it was the Sabbath, and the streets were absent of cars.

Our first stop was Bethsaida, where the majority of the disciples lived. We saw a massive city gate that had been unearthed (the first one of many we’d see along the way). We saw A LOT of rocks. Dr. Luker talked about Andrew and Philip and Peter while we stood atop a hill, watching camels and horses graze below us. We couldn’t see it, but the Jordan River was nearby.

We saw a 4th century fisherman’s house, which was ironic as no water was visible from where we stood. Dr. Luker told us a major earthquake caused a landslide, clogging the Jordan, leaving Bethsaida high and dry.

From there, it was on to Capernaum, the city of St. Peter. Peter had a house in Bethsaida, Dr. Luker told us, but used his mother-in-law’s house as a distribution center in Capernaum. The dwelling later became an early house church, and a modern Catholic church, the Church of St. Peter’s House, was built over it in the 1960s. The futuristic glass structure in no way hinders your view of the site, with its glass floor providing a good look at the space below.

Dr. Luker had told us we were to be at the Church of the Beatitudes for mass at 11 a.m. sharp, so off we went again on our big, purple bus. When we arrived, the sun was shining brightly and we made our way to the outdoor altar that had been reserved for our group. The Sea of Galilee was within sight.

Dr. Luker and Bishop Bolick prepared the communion table, and we gathered on simple stone benches. It was a good thing the space was covered, because just as the bishop began our service, thunder rumbled in the distance.

Most of us had left our umbrellas on the bus (the last time we’d make that mistake).

Our hymn of the day was “You Have Come Down to the Lakeshore.” Because our group was composed of pastors, seminarians, church musicians and plain ol’ good Lutherans (along with a stray Methodist and Episcopalian), I thought to myself, “If I wait long enough, they’re gonna break out in four-part harmony.”

Sure enough, on the second verse, they did just that. It was as if they planned it. Because I was the bishop’s designated communicator for the trip, I was able to capture the song via video for the blog. It was one of many times we’d break into song on our trip — times which became quite meaningful for our in-house “choir.”

Old is new again as vinyl records grow in…