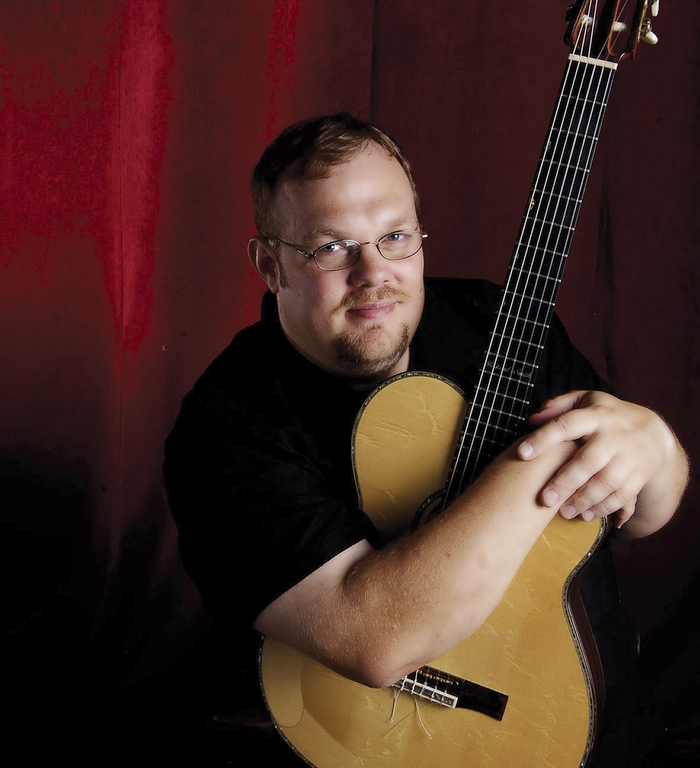 In 1983, Richard Smith appeared to be a normal 11-year-old kid. He rode his bike and played in the streets near his house, just like any other English boy. But appearances can be deceiving, and there was definitely something different with this young man. He started playing guitar at age five after his curiosity was piqued from hearing his father “picking” a Chet Atkins/Merle Travis tune. Later, his father crafted him his own guitar, and he began to spend more time playing and learning. He quickly became quite proficient on the instrument.

No one, however, could have predicted the life-changing events that were about to take place. Richard and his father joined a group called the Chet Atkins Appreciation Society (CAAS). The group’s director helped them arrange for the legendary guitarist to perform a concert at Her Majesty’s Theatre in London. During this time, Chet called the Smiths on a long distance international call (there were no cell phones) and Mr. Smith asked Chet if he would listen to his son play the guitar over the phone. Chet agreed and listened. But neither Richard nor his dad had any idea of the impact that this telephone call had made on their guitar hero.

Just a few days later, while Chet Atkins performed on stage in London, he beckoned for young Richard Smith to join him on stage. Richard was startled, and more nervous than he had ever felt before in his life. Somehow he found the strength to grab a guitar and make his way to the stage. When Chet asked him to play, Richard picked one of Chet’s own compositions, and the mentor and his young protege found themselves performing as a duo. Richard, to the amazement of the performer and his audience, managed to hold his own. At the end, he was invited to play an encore, and when he picked another Chet Atkins original, the guitar legend sat back and listened, totally in awe, as was everyone in the crowd.

Richard’s dad owns a VHS tape of this performance, and sometime ago it appeared on YouTube. This seemingly random opportunity of playing with his music icon has opened numerous doors for him. Later, Chet and Richard exchanged guitar tapes through the mail, and eventually developed a friendship.

In 1991, Richard, at 19 years of age, traveled to the U.S. to play in Nashville at the CAAS Convention. This opened additional connections, relationships and doors on his musical journey. Shortly thereafter, he met his wife, fellow musician and cellist Julie Adams, and they settled in the Nashville area.

In 2001, Richard won the prestigious distinction of being named the National Fingerstyle Guitar Champion.

Now, at 43, Richard Smith has ten solo CD releases and two DVDs to his credit. He owns and runs a recording studio, and also teaches guitar clinics and conferences throughout the U.S. and world. He also maintains a busy touring schedule with his wife Julie, who often accompanies him on tour. Occasionally, he appears with his swing band “The Hot Club of Nashville.”

Richard collaborates with some of the world’s most talented performers. He has played with such famous guitarists as Joe Pass and Les Paul. This summer, he and a cast of all-stars including Ray Stevens, Brenda Lee, Lori Morgan and Tommy Emmanuel, will meet in Nashville for an annual night of honor for the popular guitarist Jerry Reed. At this time, the group, along with Jerry’s daughter, Seidina, will release a special commemorative tribute album.

Like Chet and his fans did earlier, Richard’s fans watch and listen in amazement at the incredible speed and clarity with which he plays the guitar. His fans are also enamored by the virtuosity he demonstrates with such a wide range of musical styles, from classical, blues, jazz, and pop, to ragtime and bluegrass fiddle tunes.

While his schedule keeps him busy, Richard occasionally sits back and muses over his journey and how it all began in England so many years ago. Certainly we can conclude this seemingly normal 11-year-old boy’s life has been transformed into an extraordinary experience of a lifetime.

Bob Wingate is a local writer, guitar teacher and performer and event promoter.  He resides in Salisbury.

RICHARD SMITH played to a capacity crowd here last year, receiving a standing ovation, and now returns to perform at the Rowan Public Library on Tuesday, Jan. 27, sponsored by the Friends of the Library. Doors open at 6:30 p.m. with concert at 7. The concert is free and open to the public.

“Richard (is) nothing short of incredible—great technique, tone and feel—plus he (can) play just about anything from Bach to Blues to Jazz.”   — Ed Benson, Just About Jazz Magazine

“The most amazing guy on the guitar. He can play anything I know, only better.” — Chet Atkins, guitar legend

“He is one of the world’s greatest guitarists.” — Muriel Anderson, fingerstyle guitarist