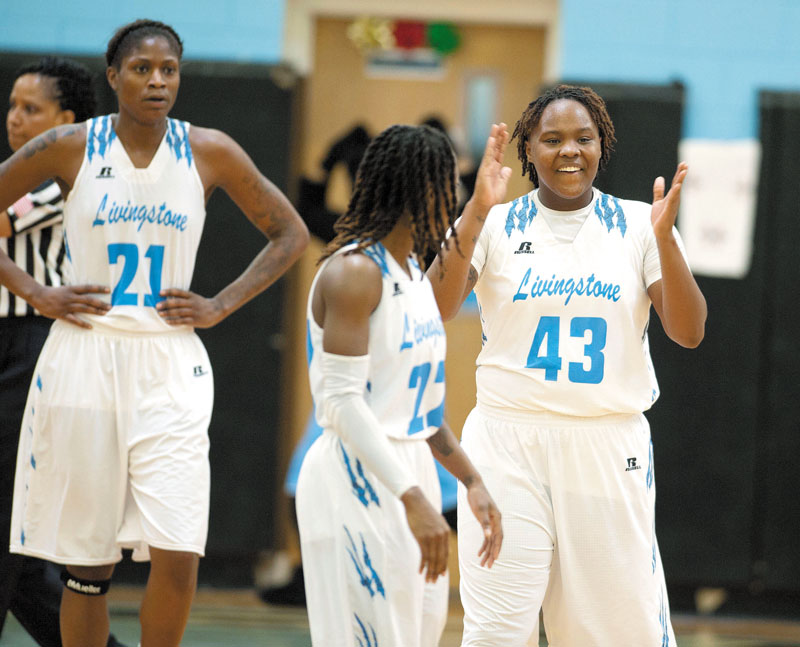 SALISBURY — If everything had gone the way it was supposed to on Saturday afternoon, Livingstone freshman Alexis Fowler probably wouldn’t have been in the game.

But it was a crazy day, and it was Fowler who grabbed the critical defensive rebound and Fowler who made the free throw with 7.2 seconds left that clinched the Blue Bears’ 78-74 CIAA victory against rival Johnson C. Smith in front of an overflow crowd at New Trent Gym.

Fowler, who shoots 78 percent from the foul line, had two free throws. She missed the first but made the second.

“I was telling her, ‘Just give me one,’ and she gave me one,” Livingstone guard Precious Roberts said.

“We didn’t want to let Phifer shine, but we did a horrible job defending  her at times,” Livingstone coach Anita Howard said.

Livingstone has lost twice to Division I schools in close exhibition games, but the 18th-ranked Blue Bears are still spotless against Division II opposition. Livingstone managed to win while playing without leading scorer and rebounder Kyra Crosby, a forward who was on the bench but not in uniform. Howard said Crosby wasn’t feeling well.

“We weren’t on all cylinders today,” Howard said. “But we still were able to take the best blow they could throw at us.”

Livingstone led 68-62 after Wende Foster got a friendly roll on a turnaround jumper with seven minutes left, but it was suddenly 68-all after Phifer and teammate Anika Jones knocked down 3-pointers.

Roberts’ 3-pointer that put Livingstone back in front  to stay at 71-68 came with 4:38 remaining and was the critical shot.

“It was a dogfight, and we were prepared for it,” Roberts said. “We made good passes and we made the key shots.”

Lakendra Wilkerson pulled down an offensive rebound for the Bulls (15-4, 5-3) with 8.9 seconds left, was fouled and made a free throw to cut Livingstone’s lead  to 77-74. But Wilkerson missed her second foul shot, and Fowler seized the rebound.

Fowler’s clutch free throw at the end was just part of a great day at the foul line for the Blue Bears, who went 24-for-29 from the stripe. That made up for the advantages the Golden Bulls had on the boards and in field-goal shooting.

“We were 83 percent from the line,” Howard said. “That’s where we won this game.”