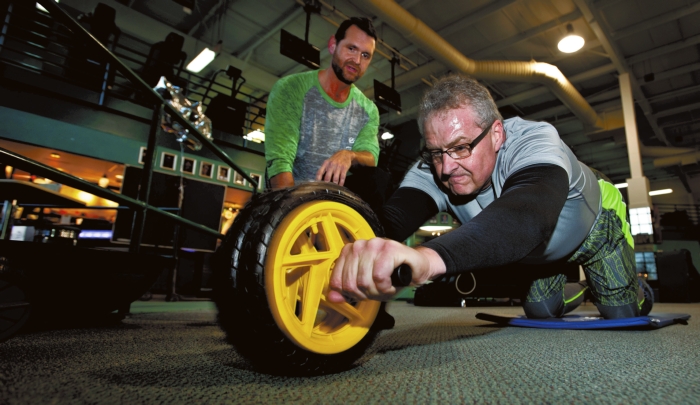 JON C. LAKEY / SALISBURY POST Rowan County Sheriff Kevin Auten has been familiar figure at the Forum on South Main Street in Salisbury. For just over a year, Auten has been working with his personal trainer, Matt Marsh, to shed off a long held storage of body fat. After a year of diligence, Auten has lost around 130 pounds and over a foot off his waistline. on 1/22/15 at in Salisbury, NC, . JON C. LAKEY / SALISBURY POST Rowan County Sheriff Kevin Auten has been familiar figure at the Forum on South Main Street in Salisbury. For just over a year, Auten has been working with his personal trainer, Matt Marsh, to shed off a long held storage of body fat. After a year of diligence, Auten has lost around 130 pounds and over a foot off his waistline. on 1/22/15 at in Salisbury, NC, .

Rowan County Sheriff Kevin Auten is nearly half the man he used to be. Make that two-thirds. He has lost 121 pounds in just over a year.

He was overweight at 366 pounds and had some health issues — high blood sugar, high cholesterol and acid reflux. Auten, 53, admits he didn’t eat right and didn’t exercise. He made the decision to make healthier meal choices and exercise as part of his everyday life.

Auten is just 20 pounds from his goal weight of 225 — what he weighed in high school.

He’s lost so much weight that he’s nearly unrecognizable. He was having lunch recently at a local restaurant when a former county councilwoman walked by him. She didn’t know who he was until he’d sat down and began talking at a nearby table.

“People in here say what have you been doing?” Auten said of the gym where he works out regularly, The Forum.

Auten began with the treadmill. Eventually,  personal trainer Matt Marsh, co-owner of The Forum, would take him through weight training. Auten recalls the day he began — Jan. 15, 2014.

Marsh said Auten may have created his own long term goal, but they began his training program by making small goals. Once Auten surpassed the small goals, it was onto the next short term goal.

The first goal was to improve Auten’s overall health.

“He has a stressful job and he was on some medications,” Marsh said.

Auten began on the treadmill then moved to the stationary bicycle.

“I kept riding the bike for months,” Auten said.

A couple of months into his healthier lifestyle, he tried a “fanatic” diet and couldn’t maintain the restrictions beyond a few days. He decided then he would just cut down on sugary sodas and sweet tea and make adjustments to his eating.

Then Marsh convinced Auten to try a spin class.

“It was hard at first,” Auten said, but he received so much support and motivation from other trainers and other Forum members.

Although Dangerfield already decided he wanted to be healthier, Auten has inspired him to continue in his own quest to be the healthiest he can be, Dangerfield said.

“It was an individual choice I made simultaneous to his,” Dangerfield said.
Dangerfield said he watched what Auten was doing and it motivated him to keep his own weight loss goals.

Dangerfield said he was sitting on his couch one night — March 7, 2014 — to be exact, when he felt a chest pain. He’d already had high blood pressure, high cholesterol and was diabetic.

It turned out that his chest pain was indigestion, but it was enough of a scare to motivate him to make the YMCA in Rockwell his first stop the next morning.

Like Auten, Dangerfield began at a steady pace with small goals, which included walking and then jogging. He was challenged by co-worker, Detective Chad Moose, to participate in the Special Olympics Torch Run. Auten also participated in a leg of the same Torch Run.

Dangerfield was so caught up in Auten’s weight loss that he didn’t notice his own. Dangerfield began at 280 pounds and now weighs 231. His lowest weight has been 222. He’s in the best shape of his life, he said.

Marsh said he got inspiration from Auten, who he said is very focused, determined and follows through.

Auten said soon he realized he was inspiring others to lead a healthier lifestyle.

Auten doesn’t restrict himself and doesn’t even work out every day and “he’ll be the first to admit, ‘I gotta get back in it,’ ” Marsh said.

There were times during the holidays that Auten ate what everyone else ate and he got off track, but then got back on track.

He’s become a “label reader,” saying he knows a Snickers bar is 220 calories and has to determine for himself if that 220 is worth the time he’d have to spend on the treadmill to burn off the calories.

He weighs himself every day and says to those who frown upon it that it keeps him on track and helps him pay attention to the foods he puts into his body.

Marsh said Auten was a very athletic person and it helped when it came to workouts. Auten was a varsity basketball starter at Salisbury High School in the late 1970s.

Auten said one of the biggest hurdles was that he had more self imposed self-consciousness.

One of the biggest motivators was seeing his son, Dylan, grow up.

Auten said he was finally at a place where he could see what his dad, the late Gene Auten, had been “harping” about — and that was for Kevin to get healthier.