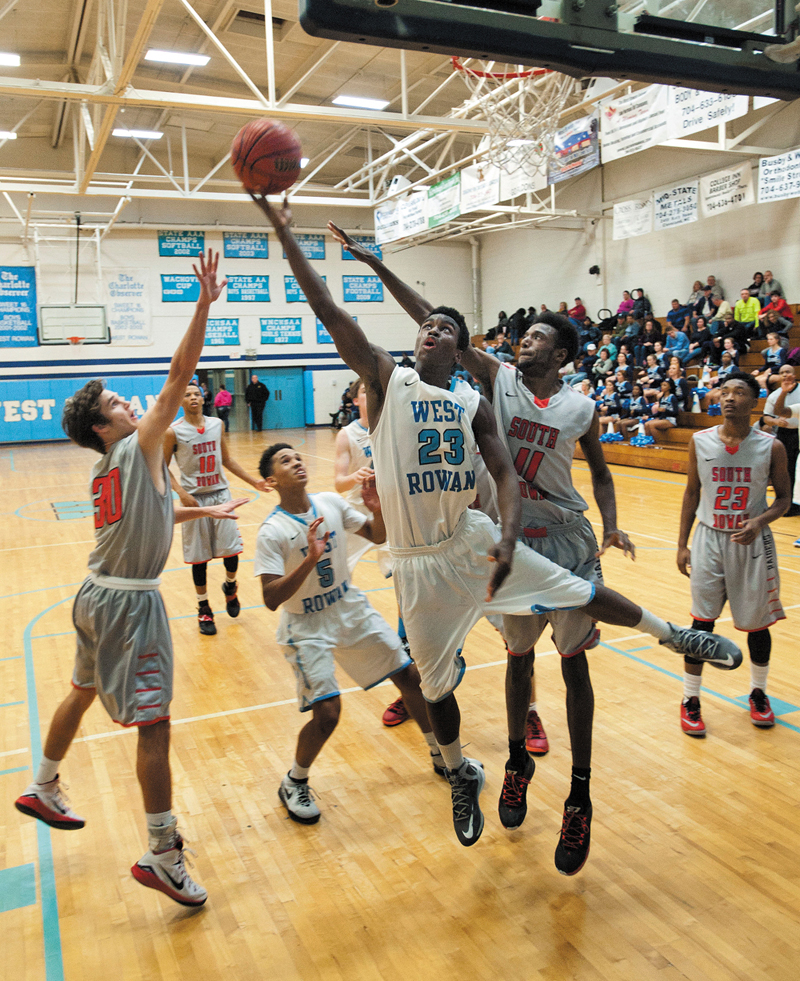 Then Caleb Mauldin fouled out, and finally, in the final minute, Celexus Long fouled out.  That meant the Falcons’ top four scorers were out of the game.  Gurley was on the verge of calling for volunteers from the audience, but the Falcons managed to hang on and beat South Rowan 71-65.

“I was proud of the bounce-back and toughness we showed after losing at Davie on Wednesday,” Gurley said.

The Raiders got 19 points at the foul line, while West Rowan made 24 free throws, including 16 in a whistle-packed fourth quarter.

“It was a foul-plagued game,” Joseph said. “We had to trust our bench.”

The one thing everyone agrees on is that the Raiders (4-13, 3-8) are better than their record.

“Their record really doesn’t tell what kind of the team they have,” Long said. “That’s a hard-fighting team, and you just try to play great defense and come out on top.”

“I’m  getting tired of the same old story,” South Rowan coach Bryan Withers said. “I can’t fault our effort, and I think the talent we have on this team is starting to show. But we’re not always smart enough with that talent.”

Long drilled four 3-pointers and scored 23 for the Falcons, including nine in the fourth quarter. Joseph had 17 points and three blocks. Mauldin scored 12.

“Hill is a great player,” said Joseph, who battled the tall Raider until he fouled out. “I just tried to make him work for every point he got.”

It was Joseph’s work on the glass that allowed West Rowan to push in front by 10 points midway through the second quarter.

“They got way too many second chances,” Withers said. “We should be a really good defensive team, so all those offensive rebounds West got were disappointing.”

Long hit a 3-pointer just before the halftime buzzer for a 30-22 West Rowan lead.

Joseph scored eight in the third quarter, scoring four straight on back-to-back stickbacks, and then taking a charge.

West Rowan appeared to have things under control when it took a 13-point lead  early in the third quarter on a three-point play by Mauldin, but then bodies collided, whistles blew, and Falcons began fouling out.

South Rowan scored 31 points in a wild fourth quarter in which the Raiders got 3-pointers from Tyler Rary, Donte Hill and Colson Childers.  The Raiders got as close as four points, but the Falcons’ bench, especially Amare Morris, did  just enough.

“We just had to make our free throws and not make crazy turnovers,” Long said.