Martin: Science and religion don’t have to conflict 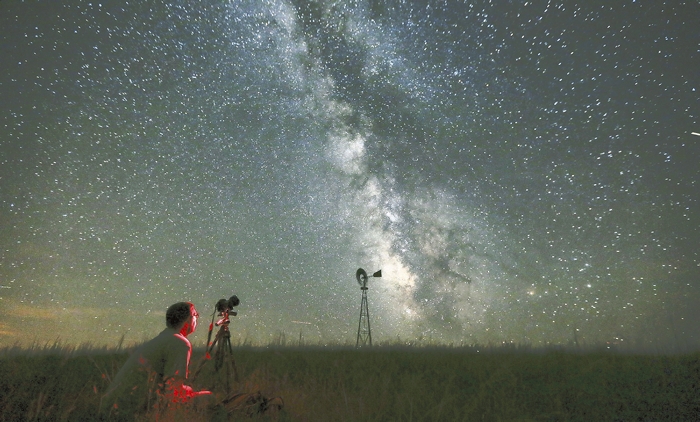 Science or God? From the Milky Way to the cells in our hearts, can science alone explain the complexities of the universe? (AP photo)

Early in his talk on religion and science here Tuesday, former Gov. Jim Martin warned his Catawba College audience that some of his presentation might seem impenetrable.

“If you get to the point where there’s something you see there but you don’t understand it, just say ‘Wow,’” Martin said.

The evening was full of wows for an audience that quickly came to appreciate the scientific part of Martin’s career. Before he was a congressman or served as governor from 1985-1993, Martin earned a doctorate at Princeton and taught chemistry at Davidson College for more than a decade.

In fact, the Catawba faculty member who introduced Martin on Tuesday, Kurt Corriher, was a student at Davidson while Martin taught there. Though fellow students warned Corriher about the dreaded “Dr. Martin” and his difficult chemistry class, Corriher told the Catawba group  he landed in Martin’s class anyway.

The story had a happy ending. Corriher said he earned one  of his “proudest and certainly one of my most challenging and difficult” A grades of his academic career.

Reconciling science and religion raises questions as ancient as Galileo and as recent as last year’s debate between Bill Nye “The Science Guy” and Ken Ham, founder of the Young Earth creationist ministry.

In a 2011 Gallup survey, more than 9 in 10 Americans said “yes” when asked the basic question “Do you believe in God?” — down only slightly from the 1940s, when Gallup first raised the question.

Martin, son of a Presbyterian minister,  said he’s biased when it comes to reconciling religion with science.

“I believe the Bible is the revealed word of God,” he said. “It is our best guide to faith and practices.

“It is not a science textbook.”

Martin, 79, shared scientific occurrences across many disciplines that seemed to indicate the hand of a higher power or God at work, rather than sheer coincidence.

Martin took his audience on a journey back in time. He cited early conflicts between science and religion, noting the troubles that Galileo’s telescope and his contention in support of Copernicus’ theory that the sun is the center of our galaxy caused, and the uproar that surrounded Darwin’s “Origin of the Species”  and its still ongoing evolutionary debate.

“My point of view is that you can believe in God and evolution,” he declared. “Science has evidence that supports my faith.”

He shared that on the 500th birthday of Copernicus, scientist and author Brandon Carter put forth his “anthropic principle” which posits that “somehow the universe was expecting us.”

Carter’s principle implied, Martin explained, that “our universe is extremely fine-tuned, otherwise, life could not arise.”

He cited American physician-geneticist and author Francis Collins from his text, “The Language of God: A Scientist Presents Evidence for Belief,” who shared three alternatives in an explanation of why Earth and its life exists: (1) there is an infinite number of universes with planets like Earth, but Earth is the only one we know at present; (2) Earth is the only place in the universe fortuitous enough to have life; or (3) Earth and its life is the only one of its kind and its existence reflects the values of a creator.

More anthropic coincidences, Martin said, can be found in the complexity of the eye, the heart, and the body’s complex redundant immune functions.

Earth was formed 4.6 billion years ago, but around 530-520 million years ago, during the Cambrian Period, there was an eruption of new body forms or phyla, he shared.  There have been no new phyla since then, but rather a decline or extinction of certain forms.

“We find God in what we know, not in what we don’t know,” Martin said, alluding to a 1945 quote from German Lutheran pastor and theologian Dietrich Bonhoeffer.

He pointed out anthropic coincidences in chemistry and biology, the complexity of the DNA code, noting human DNA has 3.1 billion rings of base pairs and asking, “What are the odds of getting the codes right?”

He noted the delicate balance of proteins interacting to generate cell growth.

“That’s a wow,” he exclaimed, and queried his listeners, “Are you beginning to see something going on here?”

Among his concluding remarks, Martin pointed to the PowerPoint image of a turtle sitting atop a fence post, and likened that turtle to man existing on Earth, quipping, “He knew he didn’t get there by himself.” 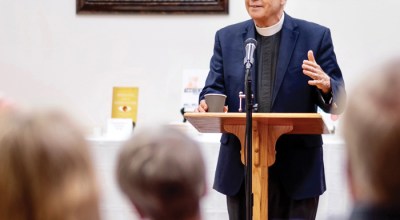