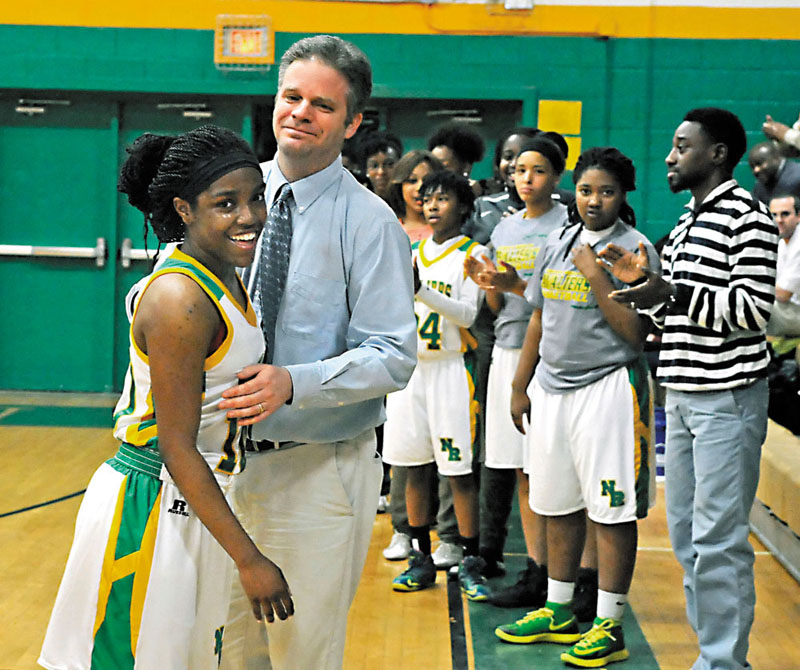 North's Demeria Robinson gets a hug from Coach Brian Lytton after scoring her 1,000th point. Demeria scored her 1,000th career point against Thomasville. photo by Wayne Hinshaw, for the Salisbury Post

SPENCER — The game at North Rowan on Friday stopped for a second to honor senior Demeria Robinson. The 5-foot-5 senior had just made two free throws to put the Cavaliers ahead of Thomasville 25-21 with 2 minutes, 46 seconds left in the first half.

Robinson had a look of surprise on her face. She had no idea what the free throws meant. They were her ninth and 10th points of the night and the 99th and 1,000th of her career.

“I wasn’t even trying to keep track because I was nervous from the start, and if I was trying too hard, I knew I was going to mess up.”

Head coach Brian Lytton said getting to 1,000 points in a career is “quite an accomplishment” for a player and the school is proud of her because she has played the game the right way.

Robinson finished the game with 12 points, and the Cavaliers survived a rough-and-tumble game with the Bulldogs for a 55-48 win.

“We got a good win against a good team tonight, and I am happy with that,” Lytton said.

He later said winning a game in which the Cavaliers were pushed means they can scrap and fight their way to victory.

North Rowan (8-5, 3-1 CCC) got a pair of back-to-back 3-pointers smack dab in the middle of the second quarter to claim a 23-21 lead. The Cavaliers never trailed again. A backdoor feed from Robinson to Ashlyn Mills with 10 seconds left in the second quarter allowed North Rowan to lead 29-26 at halftime.

Washington drained four shots from behind the arc on her way to a team-leading 16 points.

“Special can shoot, and her teammates did a good job of penetrating and kicking and finding her for good open shots,” Lytton said.

An and-one by Micaela Williams with 4:53 left to play cut the Bulldogs’ deficit to 52-46. Christina Coleman, who scored 10 points in the first quarter, followed with a pair of free throws to make it 52-48 less than a minute later.

Coleman finished with a game-high 23 points. Dee Long tossed in 13 points, including nine in the second quarter.

The Cavaliers answered by holding the Bulldogs scoreless over the final two minutes of the game and throwing in a few made free throws to add a cushion.