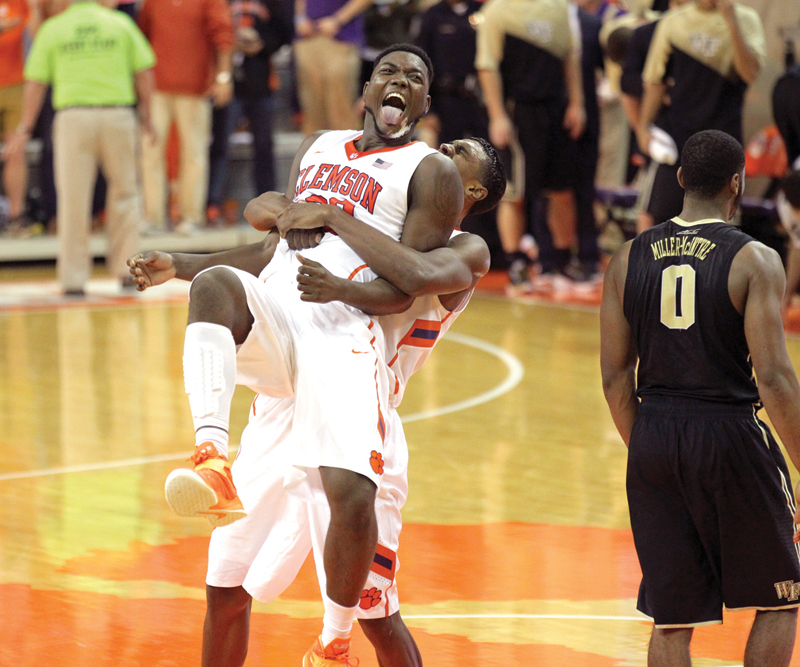 The Associated Press Wake Forest's Codi Miller-McIntyre, right, walks off the court as Clemson's Josh Smith, left, celebrates with Donte Grantham after Smith made the game-winning basket with .5 seconds to beat Wake Forest 59-57 at Littlejohn Coliseum on Saturday.

CLEMSON, S.C. (AP) — Of course Clemson would have an unlikely hero in an unlikely win where the Tigers led for exactly 24 seconds.

Josh Smith’s offensive rebound and layup with 0.5 seconds left gave Clemson (11-8, 3-4 Atlantic Coast Conference) a 59-57 victory over Wake Forest on Saturday. It was just the 15th basket Smith has made in 19 games. He was so nervous he released the shot down near his stomach, as soon as the rebound hit his hands.

Smith’s game-winner was the only basket in the final five minutes of an ugly game between two teams toward the bottom of the ACC standings. The Tigers trailed the whole way in a 59-55 loss to Florida State on Monday.

The Demon Deacons took the lead 3-0 on Darius Leonard’s 3-pointer a minute in. They didn’t give up the lead until Donte Grantham made one of two free throws with 58.6 seconds left.

Wake Forest tied it again at 57 with 35.1 left when Devin Thomas made one of two from the foul line. The Demon Deacons rebounded the second miss and had a chance to hold the ball for a potential game-winning shot. But Codi Miller-McIntyre turned it over with 25 seconds to go.

That was after Wake Forest led 55-51 with five minutes left. The Demon Deacons wouldn’t score again, missing all five of their shots, turning the ball over twice and making just two of four free throws.

Clemson didn’t fare much better, missing five shots before Smith’s game-winner. But the Tigers made four of six free throws to make up the difference.

Thomas led everyone with 17 points and 12 rebounds, but shot just 5-of-10 on free throws. Miller-McIntyre scored 14 points, but was just 5-of-15 from the field.

Clemson coach Brad Brownell said his team could have easily let things get out of hand when Wake Forest led 11-2 less than four minutes in.

“We need to try to find a way to fight through and win a game at home when it hasn’t been easy,” Brownell said.

It was an ugly win for the Tigers, who shot 35.1 percent after coming into the game 14th in the 15-team ACC, shooting 41.5 percent a game. Free throws nearly did Clemson in again after shooting 16-of-31 on foul shots in Monday’s loss to Florida State. The Tigers were 15 of 27 from the line Saturday.

In its seven ACC games so far, Clemson has scored 60 points or more just twice. The Tigers are still really missing K.J. McDaniels, who was first-team all-ACC last season, averaging 17 points a game.

Brownell said he wants to see more offense, but he’s not sure he will get his wish.

“We’ve got to get better offensively. Otherwise you are in these grinders all the time. We lost one to Florida State and won one today,” Brownell said.

Wake Forest has had the lead with less than six minutes left in four of their last five ACC losses.

Manning said he will take some time in the next few days to figure out why his team can’t hold on at the end.

“We’re not just finishing or closing, and we have to be better about that,” Manning said.

Wake Forest: The Demon Deacons were less than a minute away from a milestone. A win over Clemson would have been their 100th over the Tigers. North Carolina State is the only other team Wake Forest has beaten at least 100 times.

Clemson: Clemson football set an ACC record scoring 82 points on Wake Forest in 1981. The basketball Tigers have not scored 82 points against the Demon Deacons in 20 games since a 118-115 double-overtime win in February 2002. Senior Rod Hall had five assists, moving him up to 10th all-time at Clemson with 355.