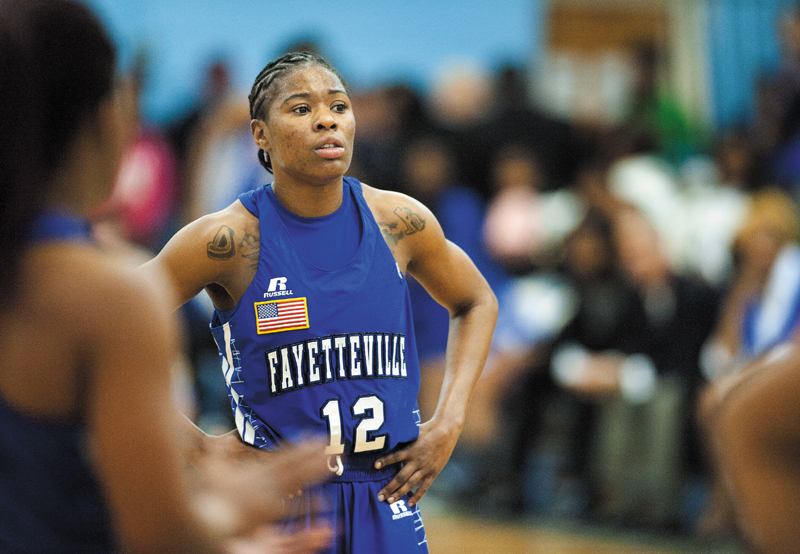 JON C. LAKEY / SALISBURY POST Former Salisbury Hornet Doreen Richardson (12) is playing for the Lady Broncos of Fayetteville State. The Livingstone Lady Blue Bears continues their undefeated season by outpacing the Fayetteville State team with a score of 92-47. on 1/21/15 at Livingstone College in Salisbury, NC, .

The Fayetteville State junior leads her team in steals and assists and ranks high in the CIAA in both categories. Heading into this weekend’s games, Richardson ranked seventh in the league with 54 assists and eighth with 33 steals.

Richardson survives in the Division II CIAA basically as a 5-foot-6 small forward because she has so much athletic ability. She’s not a great outside shooter and hasn’t made a 3-pointer in Fayetteville’s 17 games, but she understands speed is her strength.

“She’s a very good player,” said Livingstone coach Anita Howard, who got her first look at Richardson on Wednesday when Fayetteville State visited New Trent Gym. “She averages 12 points, and she got 12 against us.”

When you reach your average against unbeaten Livingstone, you’ve done something. Andrew Mitchell, who coached Livingstone’s women many seasons and coached Richardson in high school, said he’s never seen a Livingstone team anywhere near as talented.

Richardson got hugs from Mitchell and family members on her homecoming. She was disappointed her team was blown away 92-47 by the Blue Bears, but she’s confident the Broncos will do better when they take on Livingstone in Fayetteville.

Fayetteville State has been strong at home but a weak road team.

“Livingstone is a very good team,” Richardson said. “But I still feel like we’re a great team also. There shouldn’t be as big a gap between us as there was tonight.”

During Richardson’s prep career at Salisbury High, she played on talented teams. Salisbury was 110-8 in her four years and won three 2A state championships. Mitchell was the coach her first two seasons. Chris McNeil was at the helm the last two.

Richardson starred on the Salisbury jayvees as a freshman, finally making her varsity debut in 2009 with nine points in a 93-30 playoff win against East Lincoln.

As a sophomore, she averaged 5.2 points per game coming off the bench in support of the Holmes twins (Ayanna and Ashia), Olivia Rankin, Jessica Heilig and Bubbles Phifer, all future college players.

As a junior, a foot injury hurt Richardson’s production. She averaged 7.4 points per game, and once again was the team’s No. 6 scorer. The Hornets lost the talented Phifer to graduation, but they reloaded forcefully with Brielle Blaire.

Richardson’s senior year, she and Blaire were counted on to provide the points. Richardson responded with 13.3 points per game, including eruptions of 29, 27 and 22 points in Central Carolina Conference outings.  The Hornets didn’t win a state title that year, but they still were 25-4.

Richardson signed with Gardner-Webb, a D-I school in the Big South Conference, joining Heilig on the roster.

She was a rotation player and occasional starter for the Bulldogs for two seasons. As a freshman, she was among the team leaders with 78 assists and 35 steals. As a sophomore, she played somewhat less and had 24 steals and 31 assists.

Richardson transferred from Gardner-Webb to Fayetteville State prior to this season.

“I loved Gardner-Webb, but I felt I needed to do something new,” Richardson said. “Fayetteville State hadn’t recruited me in high school, but I when I was looking around, they were friendly and helpful. I like the team, and we have a great coaching staff.”

Richardson’s style of play fits perfectly in the fast-paced CIAA. She debuted with 18 points and hasn’t looked back. She’s been named CIAA Newcomer of the Week  twice this season. She scored a career-high 23 against Bowie State and had 21 against Elizabeth City State. She’s currently second on the team in scoring.

“I like playing in the CIAA,” Richardson said. “This is a talented league. There’s a lot of quickness, a lot of aggressive players.”

Richardson is one of them.

Richardson is good in the classroom. Her major is English education, so she could be an English teacher — and maybe a high school basketball coach — down the road.

“I had a 4.0 GPA last semester,” Richardson said. “My goal is to keep pushing forward.”