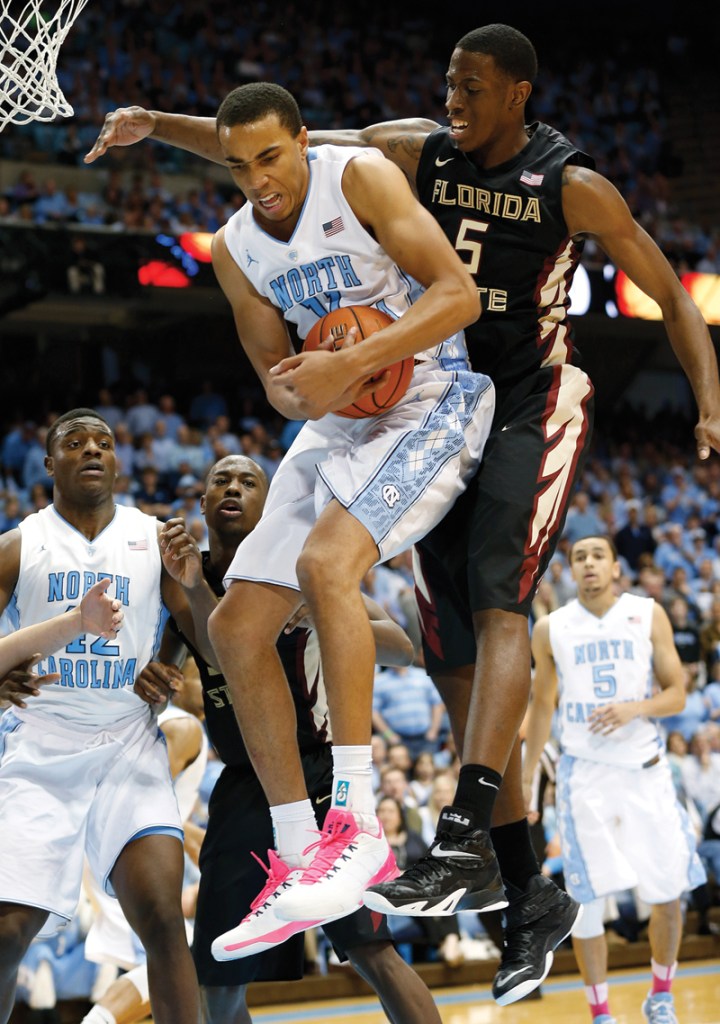 CHAPEL HILL, N.C. (AP) — North Carolina coach Roy Williams has spent much of this season trying to drag more intensity and toughness out of Brice Johnson.

When Johnson plays the way he did Saturday, it’s easy to see why the Hall of Fame coach won’t stop pushing, either.

Johnson had 18 points and 14 rebounds to help the 15th-ranked Tar Heels survive a 35-point performance from Florida State freshman Xavier Rathan-Mayes and beat the Seminoles 78-74.

The slender 6-foot-9 junior played through back tightness that had him standing at the end of the bench when he subbed out instead of sitting with teammates. He also aggravated his back on a hard fall in the first half, but finished through contact and rebounded in traffic on a day when the Tar Heels (16-4, 6-1 Atlantic Coast Conference) needed help for an injury-depleted backcourt.

“It’s a work in progress,” Williams said of Johnson. “Brice is getting better. His toughness today was maybe one of the best games he’s had because he’s hurting. … But he’s nowhere close to what I think he can be.”

Johnson earned his fourth double-double despite playing just 23 minutes due to first-half foul trouble. He has hit 15 of 20 shots in the past two games, though Williams was critical of Johnson’s inconsistent effort after Wednesday’s win at Wake Forest.

“It’s really helping me, just hearing it over and over,” Johnson said of Williams’ demands. “Then once you get in a game you hear that little voice in the back of your mind, and it’s usually Coach saying, ‘Go up strong, go through the contact.’”

Paige scored 19 points to help the Tar Heels win their fifth straight league game. They led nearly all day, though Rathan-Mayes hit three 3-pointers in the final 36 seconds to keep FSU (10-10, 2-5) in it to the horn.

Rathan-Mayes’ 35 points were a school freshman record and were the most by a UNC opponent in the Smith Center in nearly nine years. His last 3 cut the deficit to 75-72 with about 17 seconds left, but FSU got no closer.

“It gives me confidence,” he said. “But like I said, we didn’t pull out the W. … I’m not worried about myself individually. I’m worried about our basketball team and winning games.”

FSU: The Seminoles haven’t won here since February 2010. … Devon Bookert (11 points) was the only other FSU player to reach double figures. … Rathan-Mayes’ 35 points were the most by a UNC opponent here since Duke’s J.J. Redick had 35 in 2006. It also tied the fifth-best single-game total by a freshman in ACC history.

UNC: Freshman Justin Jackson scored 14 points for his third straight double-figure performance. … UNC shot 48 percent and has won 10 of 11 since losing at top-ranked Kentucky on Dec. 13. … Former football coach Mack Brown, who spent 10 seasons here before going to Texas, attended and was recognized during a stoppage with the ‘90s song “Return of the Mack” by Mark Morrison.

The Tar Heels knew they’d be without guard Theo Pinson after the freshman broke his left foot at Wake Forest. They weren’t sure if sophomore Nate Britt would play after taking 15 stitches for a cut lip suffered in that game, but he scored four points in 14 minutes.

Rathan-Mayes scored 22 second-half points and finished 14-for-26 from the field. The rest of the Seminoles shot 13-for-35.

“I think it all came together for him,” FSU coach Leonard Hamilton said. “And we really needed every one of his points to stay close.”