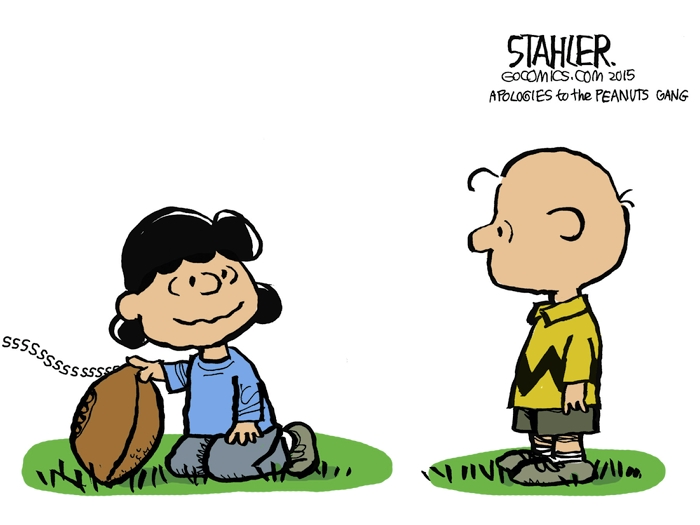 My favorite Martin Scorsese film happens to be one of the few that doesn’t revolve around Italians from New York: “The Departed.” Instead of paisanos we have Paddys, and instead of the Big Apple we have the Big Baked Bean. Boston and the Irish mob got Scorsese his long-deserved Oscar for Best Director, but it also gave me the name for what just happened in Foxborough last Sunday:

Now, I’m not comparing Patriots coach Bill “The Cheater” Belichick to a syndicate boss, and I’m not saying that Tommy “Pretty Boy” Brady was his henchman, but it does seem as if the controversy over flattened balls has turned into something much bigger than … a bunch of flattened balls.

After the Patriots thumped the “We Stole the Team from Baltimore” Colts on Sunday, people started whispering about dirty play in the locker room and on the sidelines. Those whispers turned into roars as it became evident that someone had siphoned air out of the balls the Patriots were playing with.

(Note: It will be virtually impossible for me to avoid snicker-inducing sentences when they revolve around the words “balls” and “deflate” so please, just deal with it to the end of the column.)

The lighter balls (sigh … ) would have given the Pats a significant advantage over their opponents, which might explain why they were able to rack up 135 more touchdowns than Indianapolis. They are easier to throw, easier to catch and easier to kick. Therefore, lighter balls mean a higher probability of scoring.

(OK, I have to interrupt again. There is simply no other way for me to write about football without using the term “scoring.” The mere fact that it also appears in a sentence with “lighter” and “balls” is not intended to derail the point of my column.)

Most fingers are being pointed at Belichick, who has been known for cheating and dirty dealing in the past. He and his team were fined when it was found out that they had filmed other teams’ practices, and the man is generally what my AP French students used to call “un douche majeur,” which in English translates into “a major shower” but which they gave an entirely different connotation.

Belichick is the anti-Lombardi, a man so devoid of ethics and common sense that he makes that Madoff fellow look positively saintly. He also has that sociopathic tendency of not really caring what other people think of him, and of somehow being able to slough off the residue of a really bad reputation. I don’t even think the people in Boston like him very much, but they are stuck with him and his championship ways.

If it is found that Belichick had any involvement whatsoever in the deflation scandal, and it’s kind of hard to believe that he wouldn’t have had at least some knowledge of what was happening, he should be banned from coaching during the Super Bowl. As my friend Glenn observed, this is a lot like the whole Black Sox scandal of 1919. As he put it, “It almost put pro baseball out of business, and only Babe Ruth would bring it back. Sad a team this talented needs to pull a stunt like this. It is like Nixon’s Watergate. Nixon had the election won and still needed to do something stupid like Watergate and then cover it up.”

That’s exactly the point. Belichick and crew, along with Giselle’s long-haired hubby, would have been able to beat the Colts fair and square even though Andrew Luck is a formidable talent. They didn’t need to do what they are alleged to have done, but they did it anyway because they have no conscience.

Granted, all of this is conjecture at this point, but conjecture backed up by an increasing amount of troubling evidence that this team and this coach and this metro-sexual quarterback had a hand in cheating their way to an AFC Championship. And yes, I do believe that Brady must have known what was going on as well, because when you are expecting to heave a watermelon and instead get your hands on a honeydew, you have to figure that something has happened to the fruit.

I adore football. I don’t particularly like it as much when the Eagles aren’t playing in the postseason, and I am not the kind of person who engages in fantasy pools and wagers on the positions and rankings, but this sport means a lot to me. I associate it with crisp autumn days, outings with my father and brothers at the old Vet, miracles that are significantly more impressive than anything the saints produced (I’ll put my Meadowlands up against your Lourdes any day, and I’ll even raise you an Immaculate Reception) and many of the things that make me enjoy competition.

But what Belichick is “alleged” to have done (and seriously, do we really need that much more evidence to believe he ordered those balls squashed?) is a slap in the face to everyone who thinks you play this game with clean hands.

I’m not weeping for the Colts, here. I’m weeping for all of us who love this game. Because what the Patriots probably did, well …

Christine M. Flowers is a lawyer and columnist for the Philadelphia Daily News.