Back ‘home’: Corrihers leave Landis to be near Catawba 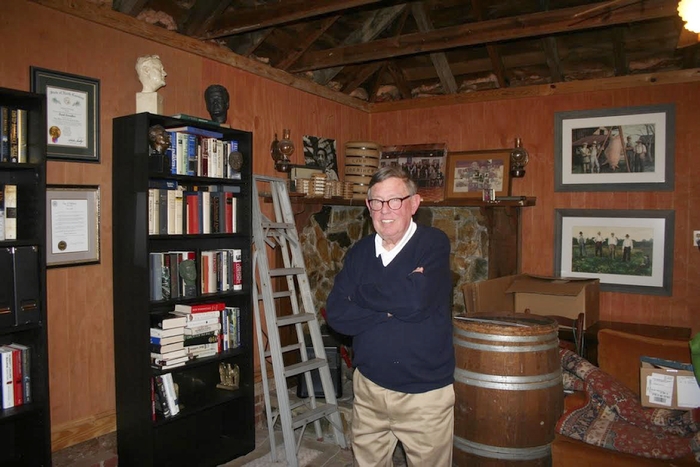 Since his move from Landis to Salisbury, Fred Corriher has been busy getting his 'man cave' in shape. It's where he'll work on winnowing down his extensive archives. Susan Shinn/For the Salisbury Post

Fred Corriher walked out onto the deck of the cozy cottage. He could hear the bells of Omwake-Dearborn Chapel. He could smell the hickory-smoked aroma of College Barbecue. He turned to wife Bonnie and said, “I believe this is the place.”

Corriher has lived very nearly every one of his 76½ years in Landis. For the last little bit, he and Bonnie have been thinking about making a change. They wanted to do it while they wanted to, not when they had to.

“Believe me, it’s not easy to leave a place behind,” Fred says. He and his wife moved into a cottage on Brenner Avenue in mid-December.

Fred’s roots run deep in Landis. He was born and raised there, and his family owned a mill there, Linn-Corriher, for many years. He’s a member of the Landis High School class of 1956. He and Bonnie still attend church there, and his list of civic involvements is long.

It’s not inaccurate, his wife says, to call him a packrat.

Fred concedes to the moniker, saying, “Bonnie claims I own everything I ever touched. I’m overly sentimental.”

For example, his mother kept a meticulous baby book — which he has — along with a long list of gifts the infant Fred received — most of which he has.

“They smell like my mother,” he says. “It would just break my heart to have to do something with that.”

He has handwritten minutes from the first board meeting of Linn-Corriher Mills, and minutes all the way up to the time the mill was sold in 1980.

He admits that a lot of the stuff is duplicates, and a lot probably needs to be tossed. But there’s a lot of good stuff, too.

Fred was elected to the Landis Board of Aldermen, but had to resign when he was named president of Catawba College. He served from 1992 to 2002.

“It was a great relief,” he admits.

He has archives from the South Rowan Y, also known as the J. Fred Corriher YMCA.

“I’m embarrassed still my name is on that Y,” he says. “I tried to talk D.C. Linn out of it. I raised some big money. That was my contribution. I think that Y has been great. It’s a wonderful attribute.”

You wouldn’t be surprised, probably, to discover that Fred has a pretty extensive library. He favors fiction by such authors as David Baldacci and Robert Ludlum, as well as books on biographies and politics.

His library is taking shape in a former garage Fred now calls “The Cave.” It’s an appropriate title. In the cave, piled to one side, are his dad’s desk, his own desk chair and two wingback chairs from his mill office, his grandfather’s breakfast table, more mill memorabilia … you get the picture.

A longtime lover of fine wine, Fred also left behind a wine cellar. It was pretty well depleted anyway, he says. Now about all he has on hand are three cases of wine — not full cases — tucked under his daddy’s desk.

The Cave, he says, is where he’ll work on his archives. He hopes to be able to donate a great deal of it to Catawba College, his alma mater.

The house, which the Corrihers are presently renting with hopes to buy eventually, is also taking shape. They’ve cut their square footage by half, as the cottage measures just 1,200 square feet. They’ve arranged their bedroom exactly the way it was in Landis — even painting the walls the same shade of dusty rose. Fred reports, “It feels just like the old place.”

The guest bedroom houses Fred’s computer and reading chair. The headboard of the bed is actually the footboard of the bed he was born in. He remembers his grandmother sitting at the dresser in front of the mirror, brushing her long hair 100 strokes every night.

The Corrihers love to cook, and Fred says it’s been a particular challenge to adjust to a kitchen that’s just 8 feet by 10 feet. “But we’re learning to live with it.”

He is the official dishwasher, and runs the small machine once a day. Bonnie continues to work part-time as Dr. Cecil Farrington’s medical assistant. Her commute is now just 3 minutes. She’s also happy to be closer to her brother and two sisters.

“We’re getting together to do things,” Bonnie says. “That’s what’s so nice.”

Fred says that he and his brother, Gene, who still lives in Landis, have committed to getting together at least once a week.

Bonnie says that Fred wouldn’t want it mentioned, but he was beginning to feel a bit isolated in Landis. Fred says that assessment is accurate.

“When we moved back to Landis in 2002, I didn’t know anybody,” Fred says. “In those 10 years, so many people I knew died or moved away. There were very few of my contemporaries around.”

He and Bonnie love that they’re in walking distance to the college — its chapel and its library and its theater — as well as to College Barbecue. He tries to limit himself to eating there once a week.

Fred and Bonnie have found it easy to settle into their new place.

“We’ve tried to bring things we love and surround ourselves with them,” he says. “We didn’t buy one new thing except for the living-room sofa, which converts into a sofa bed.”

That way, both their boys can be home for the weekend. John Lotan lives in Utah, and Frederick lives in Charleston. Daughter Charlotte lives on a boat in Wilmington, and Fred’s other two daughters, Susan and Mary, still live in the South Rowan area. The crowd got along fine at Christmastime, eating their meals from plates on their laps.

“The children said it just felt intimate and cozy, and warm and welcoming,” Fred says, which makes him happy.

The house is in a quiet neighborhood. Fred looks forward to warmer weather, so he can crack his windows to hear the chapel bells. At the moment, he has to go outside.

Fred knows that most folks his age must change their living situation at one point or another. And he urges anyone who needs to downsize not to wait too long to do so.

“It’s hard when you’ve got deep roots somewhere,” he admits. “The longer you put it off, the harder it becomes.”

But for Fred, the sound of the chapel bells and the smell of delicious barbecue are making this new season of his life a bit easier.

Chamber of Commerce reflects on 2014, looks to the…