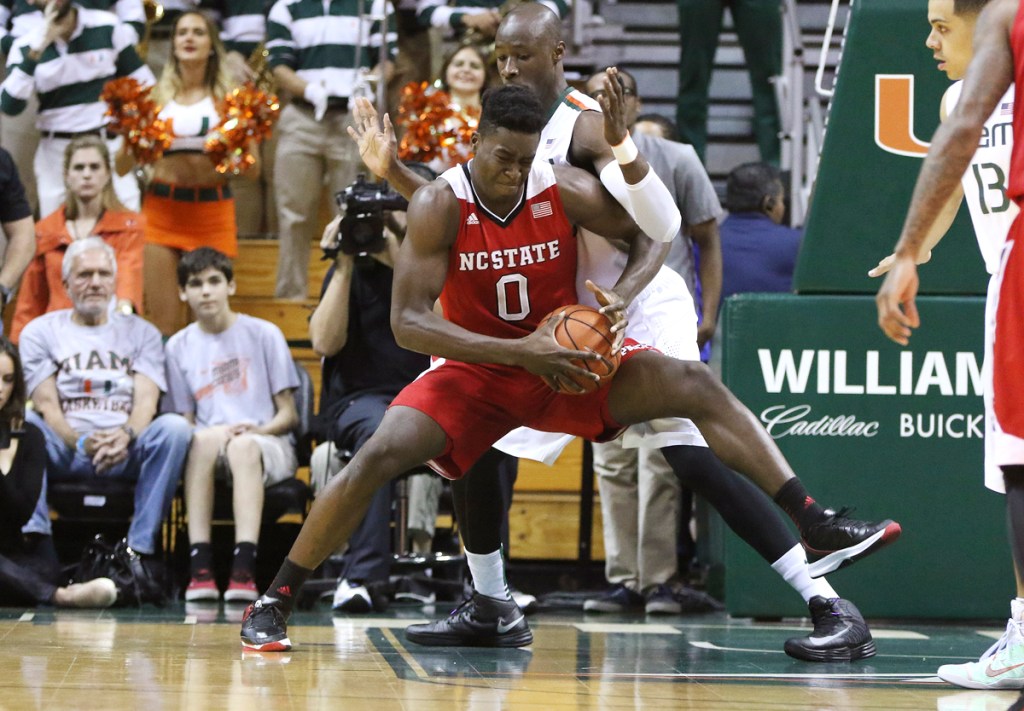 The Associated Press Miami's Tonye Jekiri (23) and North Carolina State's Abdul-Malik Abu (0) fight after the tip-off Thursday in the second half in Coral Gables, Fla. Miami held on to beat N.C. State 65-60.

The first few minutes of the second half were just enough to help the Hurricanes hold off North Carolina State.

Davon Reed and Omar Sherman each scored 10 for Miami (13-5, 3-2 ACC), which opened the second half with a 12-2 spurt to erase a seven-point halftime deficit and never trailed again — though the Hurricanes had to survive some frantic final moments.

“Taking the lead that early in the second half, I thought really gave our players a boost of confidence,” Miami coach Jim Larranaga said.

“Some of it is who you’re playing, some of it is your opponent,” N.C. State coach Mark Gottfried said. “Who knows? There are few easy games in the league.”

A lob from Trevor Lacey to Abu for a dunk with two minutes left got the Wolfpack within 56-52, and things just got more interesting from there.

Ralston Turner made two 3-pointers in the final 1:33, both getting the Wolfpack within one, but his 3 that would have given N.C. State the lead with 40 seconds left hit the rim twice before bouncing off.

And with 5.3 seconds left, Anthony Barber was trying to get free for a 3-point try that could have tied it but he was called for pushing Miami’s Davon Reed.

Lacey scored 10 for N.C. State, which shot only four free throws to Miami’s 21.

Abu scored the first 12 N.C. State points, keeping the Wolfpack in it early while the rest of his teammates combined to miss their first nine shots.

When his teammates started connecting, it got contagious in a hurry.

Down by six at one point in the first half, the Wolfpack ripped off a 13-0 run over a four-minute stretch just before intermission and took a 33-26 lead into the locker room. Miami made its first three shots, then missed 17 of its next 22 over the rest of the half.

Not even 2 1/2 minutes into the second half, the N.C. State lead was gone. McClellan and Rodriguez either scored or had the assist on Miami’s first eight field goals of the second half.

“We stepped it up and we did what we had to do,” Rodriguez said.

Miami: The Hurricanes made their first two 2-point shots in the game’s first 4:42, then missed their next nine — not connecting again from inside the arc until the opening minute of the second half. … Miami has now won consecutive home games for the first time since Nov. 28 and Dec. 2.

Miami coach Jim Larranaga apologized postgame to N.C. State coach Mark Gottfried because a fan sitting courtside pushed Anthony Barber in the back in the final seconds after a foul.

Abdul-Malik Abu had nine field goals, which was one more than any two Miami players had combined.