Chamber of Commerce reflects on 2014, looks to the future at annual gala 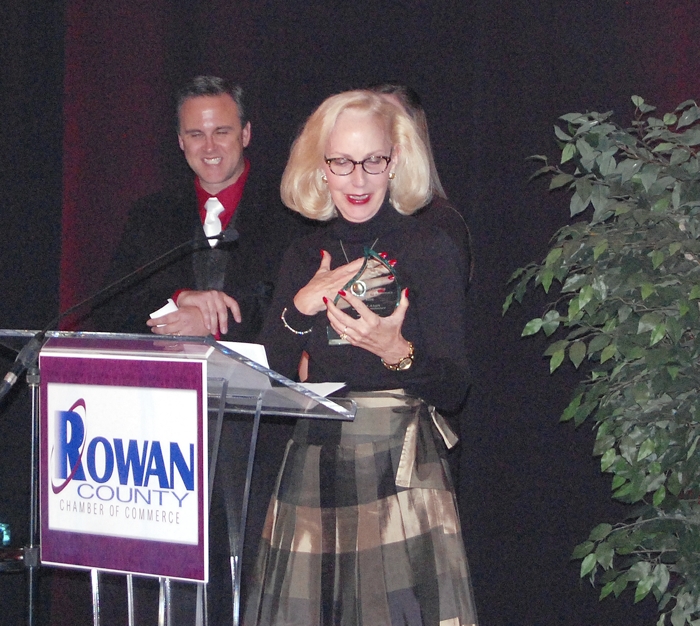 Martha Bostian reacts after receiving the award for volunteer of the year during the Rowan County Chamber of Commerce annual gala Thursday night at Catawba College.

The Rowan County Chamber of Commerce celebrated its success in 2014 and looked forward to 2015 during the annual gala Thursday night at Catawba College.

It was a sold-out event at the college’s Crystal Lounge. Those in attendance represented businesses of all sizes across the county. They heard from the chamber’s leadership and honored individuals for their service. And local comedy group “Now Are the Foxes” provided plenty of laughs and fun entertainment.

Patterson Farm Inc. was awarded Small Business of the Year. The business goes back to 1946 and is one of the largest tomato growers in the state. The farm also grows other produce and plants.

Vice President Doug Patterson accepted the award on behalf of his family, who he thanked for all they do.

Martha Bostian was honored with the Paul E. Fisher Volunteer of the Year Award.

“My goal in life is to help others,” she said, holding back tears, “And I thoroughly enjoy being a part of this group.”

“Service is, I think, a noble calling in the field of politics, and we need more people to serve our community, our state and our nation. And for whatever I could do to help promote that value and that goal of public service I am deeply honored and humbled by this,” he said.

Mark Seifel, chairman of the chamber’s board in 2014, said last year was the start of a new era for the chamber and Rowan County.

“The alignment of priorities and resources across all of the stakeholders in the county has created the potential for making it a better place to live and do business in the coming years,” he said.

The pieces are there, he said, and the prospect for significant achievement is great.

It’s going to the take the commitment of the entire county to build upon the progress of 2014, Seifel said.

The chamber’s board chairwoman for 2015, Dari Caldwell, president of Novant Health Rowan Medical Center, said the county has the opportunity to become “what we want to be.”

She said one of the chamber’s priorities will be to embrace and support the Rowan-Salisbury School System.

Education is “paramount,” she said, adding, “We are blessed with being a college town.”

Caldwell said it will be important for the county to brand itself as an easy place to do business.

It’s time for positive change, she said, and time to move the county forward.