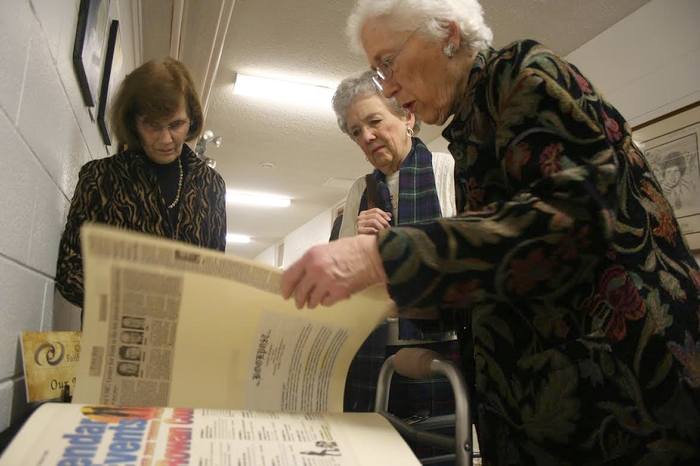 The Center for Faith & the Arts did just that Thursday evening, with a retrospective exhibit that kicked off at Haven Lutheran Church. The church’s lower level has been the center’s home since 2004, when it moved from a cramped office in Downtown Salisbury.

The organization was founded by Dr. Dan Brown, who was looking for something to keep him busy after a 30-year career at Catawba College, his wife Betty said Thursday evening. “I find it very rewarding that all the effort has paid off. I’m amazed what has been done in 20 years.”

Indeed, the center’s two gallery walls were papered with a plethora of memorabilia, from publications to plays to lectures to tours to art exhibits and more. Fun ceramic artwork from the “Wake Up Leonardo!” summer arts academy for children and youth was displayed on one end of the hall. The center has sponsored that program for the past three years.

Betty Brown, along with board members Missy Shives and Dr. Martha West, enjoyed looking at a large scrapbook that covered the center’s extensive work over the past decades. The first article about the center — detailing Brown’s goals — appeared in the Post on Oct. 23, 1995.

The move to Haven, Betty Brown said, opened up a whole new venue for programming. Judging by all the programming that’s taken place since, it was definitely the right move for the center.

“We realized we were going to have a 20-year milestone,” Karen Campbell, board chair, said Thursday evening. “For a small nonprofit, that’s no small thing. We wanted to lift that up and celebrate it. It’s just been fascinating to see the breadth of things that have gone on.”

While the center remains faithful to its original mission, Campbell said, it is moving forward with plans to use “this time and space in order to speak to people’s spirits.”

The arts community has changed over the past 20 years, Campbell said, and the center wants to change, too.

Over the years, Dr. Jim Epperson has directed several plays for the St. Thomas Players, the center’s drama troupe. He said Thursday evening that a reader’s theater called the Phoenix Readers had just been approved. Led by Epperson, the senior group will visit nursing homes, senior centers “and any place that wants us.”

Epperson said of the Center for Faith & the Arts, “It found a niche. It was needed.”

Betty Brown credited her husband — and many others — for the center’s success.

“So many different people have played a role in its development,” she said. “It was never a one-man show.”

The celebration continues on March 7, when the center observes its 20th anniversary with an event at Lee Street Theatre, beginning at 7 p.m. Tickets at $75 per person are available online and include hors d’oeuvres, desserts, open bar, and entertainment by the St. Thomas Players.

For more information about the Center for Faith & the Arts, visit www.faithart.org .

Back ‘home’: Corrihers leave Landis to be near Catawba