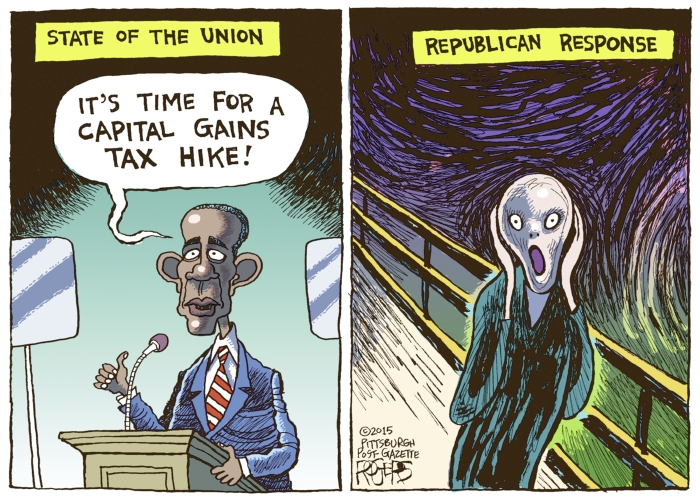 Excerpts from editorials commenting on this week’s State of the Union address:

In an era of increasingly grotesque wealth concentration and stubborn wage stagnation, shifting the federal tax burden from the middle toward the highest incomes shouldn’t be as controversial as it is. Nevertheless, the proposal President Barack Obama put forward in his State of the Union address Tuesday, which would raise taxes on investments by hundreds of billions of dollars to fund credits for families of more modest means, is the Democratic counterpoint to endless Republican attempts to repeal the Affordable Care Act: an appeal to popular and partisan sentiment that will go nowhere in the current political environment.

… Obama was certainly entitled to stake out the territory he hopes his party will stand for going into the next presidential election. But this State of the Union address was delivered to the most hostile Congress of his tenure, with Republicans in full control for the first time. If the last two years of Obama’s presidency are to be more than a prelude to the next administration — and let’s hold out fervent, if not desperate, hope that they will be — the president and Congress will have to do more than reiterate their favorite partisan attachments.

Indeed, he offered a number of proposals whose sole purpose, it seemed, was to provoke the GOP — including a $320 billion tax hike, a $60 billion federal-financed community college entitlement, and a nearly 40 percent increase in the federally mandated minimum wage.

Yes, the president mouthed perfunctory platitudes about pursuing “common purpose” with Republicans on a few selected issues. He also suggested that he and Republican leaders should agree to disagree on many more issues.

The problem is that Obama could barely conceal his disdain for his loyal opposition.

After six years in the White House, he still does not understand the basics of statesmanship: that at least a modicum of civility is required between two differing parties before they can even agree to disagree; and that, absent that modicum of civility, it is difficult for the opposing parties to reach accord even on the selected issues on which they actually agree.

… Obama’s predecessors were able to disagree with the opposition party without being disagreeable — a leaderly trait Obama sorely lacks.

What we didn’t hear from the president last night is a political path toward getting even a fraction of his wish list from traditional economic conservatives. This is the crowd that dominates Congress. Many share his concerns about a teetering middle class, and he needs their support for anything of substance to pass. But the president presented more of a laundry list of populist one-off proposals than a comprehensive tax plan designed to attract bipartisan support.

As a result, Obama has strengthened the hand of the GOP’s most resistant wing. Differences are negotiable within a package of comprehensive individual and corporate tax reforms. As stand-alone measures, such hot-button measures only encourage gridlock.

We urge the president to be more strategic. He should reach out, for example, to House Ways and Means Chairman Paul Ryan, a respected Republican voice on fiscal policy ….

If there was a virtue in Mr. Obama’s speech, it’s that we can now retire the lectures on “responsible governing.” With the exception of trade and the war against Islamic State, the President Tuesday sought no common policy ground with Republicans. He offered a Nancy Pelosi agenda. Imagine if George W. Bush had proposed a $320 billion tax-rate cut in his 2007 State of the Union, following his rout in the 2006 midterm. He would have been hooted out of the chamber, followed by days of wondering if he’d wigged out.

If Mr. Obama won’t make any concession to political reality, then Republicans are under no obligation to take his agenda seriously. For their own peace of mind, they should ignore his gaslighting and prioritize something that really would help the economy.

Mr. Obama won’t be on the ballot again, but he continues to be a true believer, and what he believes is that pitting Americans against each other still works to his party’s advantage. The result has been a divided and restive country hoping for the change he promised six years ago. He says he wants to work with the new Congress, but by his lights bipartisanship means the other party must roll over and give his wonderful self whatever that wonderful self wants.

That’s not going to happen. Americans must take the president’s words not as a blueprint or a serious attempt to find a way forward,  but as a declaration that he will continue to belittle his opponents, divide the country and act as if anyone who disagrees with him is a mean-spirited obstructionist. Rarely has a State of the Union message rung with such clarity.