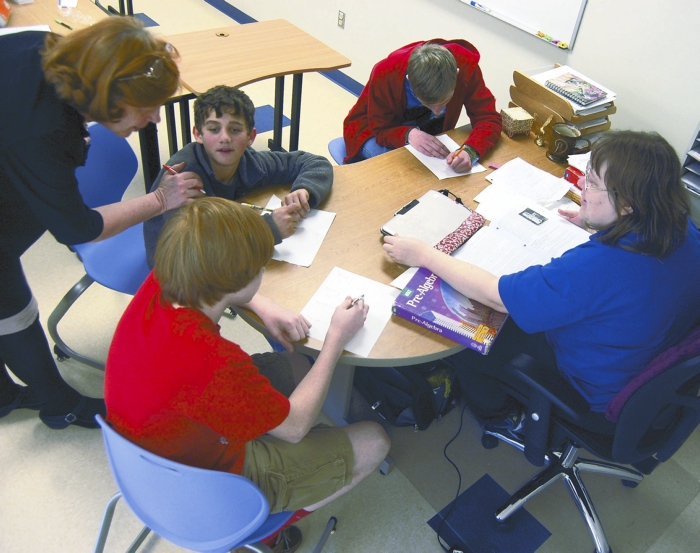 Not only has the completion of the Dave and Ruth Davis wing given the school a facelift from the outside, it’s provided the school with much-needed new classrooms.

Before the wing was completed, the AIM program’s home was in a rather worn trailer at North Hills. Now, they have moved into a new, inviting space.

AIM, which stands for academic individualization and modification, serves the needs of those children.

“We don’t want to be cookie cutter,” Plummer said, adding that at North Hills, it’s a priority for the class to fit the child, rather than for the child to fit the class.

Students are scheduled for AIM sessions based on their needs. Some come in every day, while others come in once or twice a week.

“It’s not in any way a traditional classroom,” Plummer said.

The AIM room doesn’t look like a normal classroom. The furniture and posters are brightly colored. In some places, rocking stools or yoga ball chairs replace normal chairs. In one corner, there’s a beanbag reading area and there’s a giant map of the world printed on the rug at the front of the room. The tables aren’t square and a movable half-wall can be used as a divider if multiple groups need to use the room.

“A lot of our kids are ADHD,” Plummer said. “Sitting in a traditional chair is hard.”

“I wanted a room that would adjust to them,” she said.

Not only does the AIM program have a new home, so does the school’s Latin, art, music and biology classes. There’s also an outdoor learning space and the school’s two main buildings have been connected.

Each of the components helps the school to fulfill its mission to provide a Christian education in a classical learning environment.

The new 6,000-square-foot wing was named in memory of one of North Hills’ founders Dave Davis and his wife Ruth.

The project, which started in May 2014, was completed earlier this month and cost $1.1 million to build.

The wing is just the first phase in the school’s plan to continue upgrading and expanding its facilities.

“We’re going to be working this spring on our master site plan,” Lowder said.

The master plan will give the school direction on what to do next.