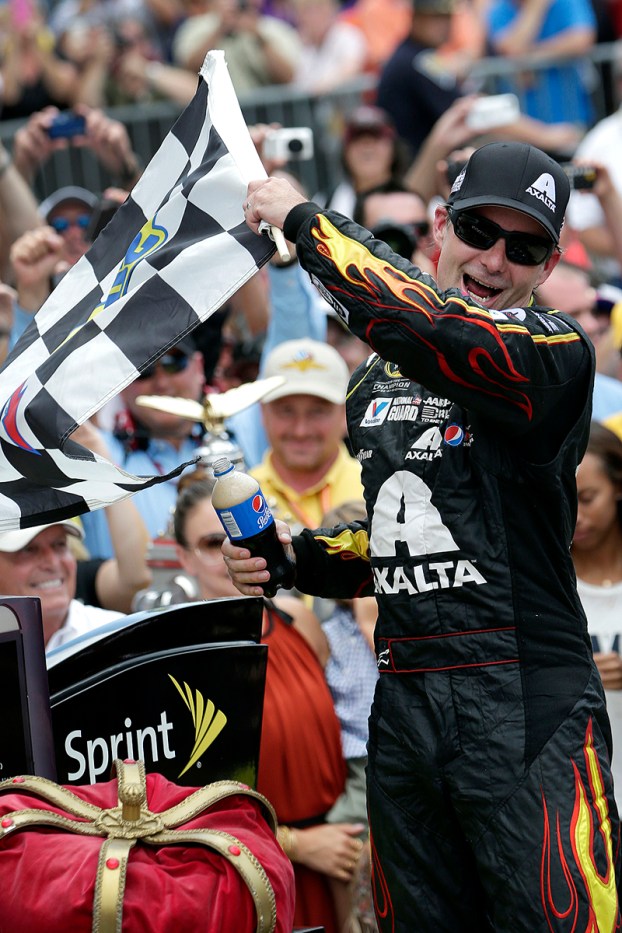 The Associated Press In this July 27, 2014, file photo, Jeff Gordon celebrates after winning the NASCAR Brickyard 400 auto race at Indianapolis Motor Speedway in Indianapolis. Gordon says he will retire as a full-time driver after 2015 season.

Jeff Gordon, with a nagging back injury, a young family he wanted to spend more time with and a phenom waiting in the wings at Hendrick Motorsports, knew midway through last season that he had one more year in him.

NASCAR’s most charismatic driver, the man behind the wheel of the famed and sometimes feared No. 24, had decided it was time to call it quits on one of the most successful careers in motorsports history. The four-time champion conferred with Rick Hendrick, the only team owner he has had over 23 years of Sprint Cup racing, and settled on a date.

The 43-year-old Gordon announced Thursday that 2015 will be his final season as a full-time driver, saddening legions of fans, fellow drivers and others who watched him became the face of stock car racing as the sport exploded in popularity a generation ago.

In an interview with The Associated Press, Gordon said he reached his decision last summer. He had seen other drivers embark on distracting farewell tours, and he didn’t want to be that guy. Although he told his crew chief of his decision after narrowly missing out on shot at a fifth championship, it took time to settle on the day to tell the world.

It started with a conversation with his two young children when they woke up for school. They worried they won’t go to the race track anymore, that other kids might think of them differently if their father is not a famous race car driver.

The conversation with Ella and Leo made the decision a reality for Gordon — and he wept.

“Ella just stared at me, she’d never seen me cry like that before,” Gordon told AP. “After that, I seriously broke down. It hit me like a ton of bricks, and I got so emotional and thought, ‘How am I going to get through this day?'”

Gordon said he sobbed during the entire 30-minute drive to Hendrick Motorsports, where he tearfully informed his team and his longtime employees of his decision. Gordon choked back tears yet again during his interview with AP when his mother sent him a text message that he read aloud: “I never knew watching SportsCenter could be so emotional.”

“I’m emotional because I am so proud,” Gordon said. “It’s all I ever wanted, to be a race car driver. And here I’ve lived this incredible dream and yet that chapter of my life has been fulfilled and it’s now time to go to the next step and the next chapter.”

He made a point to say he didn’t use the word “retirement” because he could still drive again after this season.

Gordon’s 92 wins trail only Hall of Fame drivers Richard Petty (200) and David Pearson (105). His fame reaches far beyond the track and resonates with non-sports fans. He won all the big races, collected four championships in just seven years and had 58 victories before his 30th birthday.

He was a new breed of driver when he broke into NASCAR’s top series, arriving with a sprint car pedigree and talent that made him an immediate contender. The clean-cut kid helped raised NASCAR’s corporate image beyond its moonshine roots, making it a legitimate power on Madison Avenue as tens of thousands of new fans flocked to automobile racing in the late 1990s and 2000s.

“Jeff changed the personality and perception of a race car driver in NASCAR,” retired NASCAR crew chief Larry McReynolds said. “Before he came along, the perception was more about the good old Southeastern boy wearing blue jeans, big belt buckles and boots. But he created a new buzz in our sport because he looked like he stepped off the cover of a GQ magazine.”

Gordon became such a household name that he even hosted “Saturday Night Live” and was name-dropped in a Nelly song. He did it all while dominating at the track as the “Rainbow Warrior,” teaming with crew chief Ray Evernham to collect checkered flags at a record pace.

Gordon, who debuted in the final race of the 1992 season in Atlanta, won championships in 1995, 1997, 1998 and 2001. He also has three Daytona 500 victories and a record five Brickyard 400 wins. Gordon told AP that his 1994 win in the inaugural Brickyard 400 — NASCAR’s first race at historic Indianapolis Motor Speedway — was easily the highlight of his career.

The low point? Intentionally wrecking Clint Bowyer in the closing laps of the 2012 race at Phoenix, where frustrations over a disappointing season got the best of him. Gordon also said a post-race melee with Brad Keselowski last November was in part triggered by his knowledge that perhaps a shot at another championship had slipped away. He was racing for the win when contact with Keselowski effectively ended his title chances. He wound up missing the four-driver championship field by a single point.

Coming so close didn’t change his decision to drive only one more year, though. With an ownership stake at Hendrick, and plans to remain involved with the organization for years to come, Gordon told AP “the timeline was just right.”

Gordon suffered serious issues years ago in his back, specifically his lower spine, and needed anti-inflammatory medication and workouts with a trainer to return to full strength. He drove in pain during a winless 2008 season and briefly contemplated retirement.

He also wants to focus more on his family life, which has changed dramatically over his career.

The one-time “Wonder Boy” was a mustachioed young bachelor when he entered NASCAR, and he embarked on a storybook romance with the series’ leading model that led to the most high-profile marriage the sport had ever seen. Gordon and the former Brooke Sealey split in 2002. He found happiness and the desire to start a family when he married Ingrid Vandebosch in 2006.

“I want to be with my kids,” he told AP. “I’m seeing them grow up before my eyes and I’m never here.”

Gordon will now take one final victory lap around the circuit with drivers such as reigning Sprint Cup rookie of the year Kyle Larson, who routinely posts childhood photos of himself in Gordon gear.

“Jeff Gordon is a hero to a lot of kids, and the driver I personally looked up to as a kid,” Larson said. “He’s a hero of mine.”

Although no replacement for Gordon has been announced, the next driver of the No. 24 will most certainly be reigning Xfinity Series champion Chase Elliott. With a full roster of four drivers, Hendrick has been handcuffed in what he can do with the 19-year-old phenom.

Gordon has won at every track on the Sprint Cup circuit except Kentucky Speedway. His four championships trail only teammate Jimmie Johnson, a six-time champ, for most among active drivers. Petty and Earnhardt each won seven.

“There’s simply no way to quantify Jeff’s impact,” Hendrick said. “He’s one of the biggest sports stars of a generation, and his contributions to the success and growth of NASCAR are unsurpassed. There’s been no better ambassador for stock car racing and no greater representation of what a champion should be.”