‘Lombardi’ — A legend on stage at the Meroney Theater 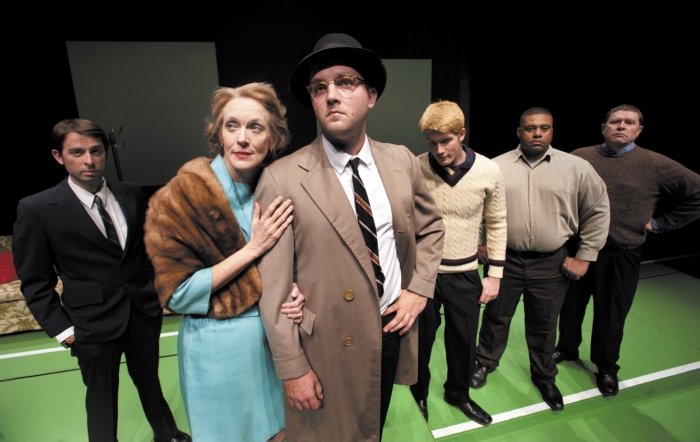 From left: Tony Moore, Kathleen Tronsor, Ed Whitney, Zack Oster, Tony J. Crawford and Brian Rassler. Piedmont Players Theater is set to stage the next production at the Meroney Theater. The play "Lombardi" follows Green Bay Packers coach Vince Lombardi through a week in the 1965 season, as he attempts to lead his team to the championship. JON C. LAKEY / SALISBURY POST

Vince Lombardi was a teacher, a coach, and a leader. With an emphasis on teamwork, focus and discipline, he built a legendary philosophy to succeed and a will to accomplish goals.

The play, by Eric Simonson, is based on the book “When Pride Still Mattered: A Life of Vince Lombardi” by Pulitzer Prize-winning author David Maraniss and follows the Green Bay Packers coach through a week in the 1965 season, as he attempts to lead his team to the championship. A magazine reporter, Michael McCormick, wants to “find out what makes Lombardi win”. When players on the team refuse to be interviewed, McCormick goes to Lombardi’s wife, Marie, for answers and begins to discover that Lombardi is “the most imperfect, perfect man” he ever met.

“Lombardi” is the story of a man who wore his passion and emotions on his sleeve. By no means an overnight success, Lombardi never gave up on his dream. Thomas Kail, the director of the Broadway version, was struck by how long Lombardi struggled to reach the highest level. “I think that one of the things that’s really important now is that the process of achieving has been diminished,” he said. “People feel that if it’s not accelerated, if it’s not done in 25 seconds, that it’s taken too long. What Lombardi showed by coaching and teaching is what it means to ‘put your time in,’ and to ‘pay your dues.’”

The story of this complex and inspiring man resonates today as much as it did nearly a half century ago. Lombardi’s faith, grit and commitment not only contributed to the success of the NFL, but it also forever impacted the players he coached and the millions of fans he inspired. As a result, the most coveted prize in all of sports — the Super Bowl trophy — now bears his name.

The PPT production of “Lombardi,” opening at the Meroney on Jan. 29, is about far more than football; it’s about family, relationships, humanity and one man’s struggle with his flaws. “I think ‘Lombardi’ is about striving for excellence. No matter what it is that one does,” Kail continues, “I think that if they approach their craft or their job with that attitude, then they can understand why Lombardi had such an impact on so many people.”

(from the LOMBARDI study guide at lombardibroadway.com)

Vincent Lombardi was an inspiring leader and iconic figure whose incredible coaching techniques and powerful personality made him one of the greatest football coaches of all time.

He was born in Brooklyn on June 11, 1913 into a large extended Italian family. As a young man, he initially began studies to enter into the priesthood until his interest in football guided him to St. Francis Preparatory, where he was a fullback.

Lombardi married Marie Planitz in 1940 and the couple had two children, Vince Jr. and Susan.

He graduated from Fordham University where he briefly returned to coach and later took a position at West Point where under coach Earl “Red” Blaik he learned techniques for discipline and strategy that would become his spe cialty. His NFL coaching career started as offensive coach for the New York Giants before being offered the general manager and head coaching position for the Green Bay Packers.

Lombardi’s intense training regimen, strategy and leadership transformed the Packers into the team to beat during the 1960s. His legendary “Power Sweep” was a part of the powerful Lombardi style that won five NFL Championships and the first two Super Bowl titles for Green Bay.

Lombardi left the Packers for a coaching position with The Washington Redskins where he led them to their first winning season in over a decade. Lombardi died of colon cancer in 1970 at the age of 57. Soon after his death the Super Bowl trophy was named in his honor.