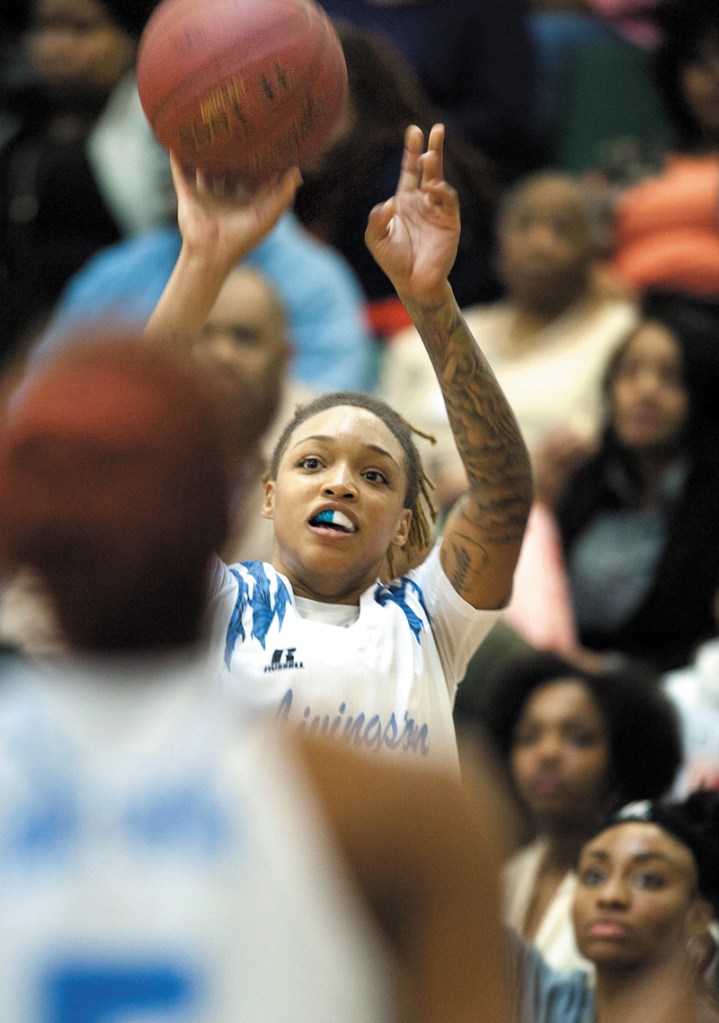 JON C. LAKEY / SALISBURY POST Livingstone's Amber Curtis lines up for a three pointer. The Livingstone Lady Blue Bears continues their undefeated season by outpacing the Fayetteville State team with a score of 92-47. on 1/21/15 at Livingstone College in Salisbury, NC, .

SALISBURY — Livingstone guard Amber Curtis prefers passing to shooting. So she turns down good shots in the search for great shots.

“She’s very unselfish, so opponents leave her open a lot,” Livingstone coach Anita Howard said. “There are times when she has to show them she can shoot, and today she felt it.”

Curtis had 18 points by halftime. She finished 9-for-14 from the floor, including three 3-pointers, and scored 23 points as Livingstone blew out Fayetteville State 92-47 in Wednesday’s CIAA game at New Trent Gym.

“We need to do better at valuing every possession,” Howard said. “Even with a big lead, we don’t want to get sloppy.”

Howard said the rebounding was the noteworthy stat. She was concerned about the Broncos’ 6-foot-4 twin towers — Deja Middleton and Bria Robinson. Middleton had posted seven straight double-doubles, but she was limited her to one field goal.

“They’re one of the taller teams we’ll play, so we focused on boxing out,” Howard said. “We wanted to get their two tall girls in foul trouble, and we did a good job of that.”

Fayetteville State (7-10, 3-5 CIAA) got 12 points from former Salisbury High star Doreen Richardson, but the game was over at halftime with the Blue Bears leading 49-26 after shooting 50 percent.

“We kind of shocked ourselves with that first half,” Curtis said with a laugh. “We played fast and we had fun.”

Fayetteville State tried zone and man-to-man, but neither defense slowed the Blue Bears, who shot 47.8 percent for the game.

Livingstone is finally ranked in the D-II poll, although 18th seems low with only three unbeaten D-II teams left in the country.

“We can still play with a chip on our shoulder,” Curtis said.