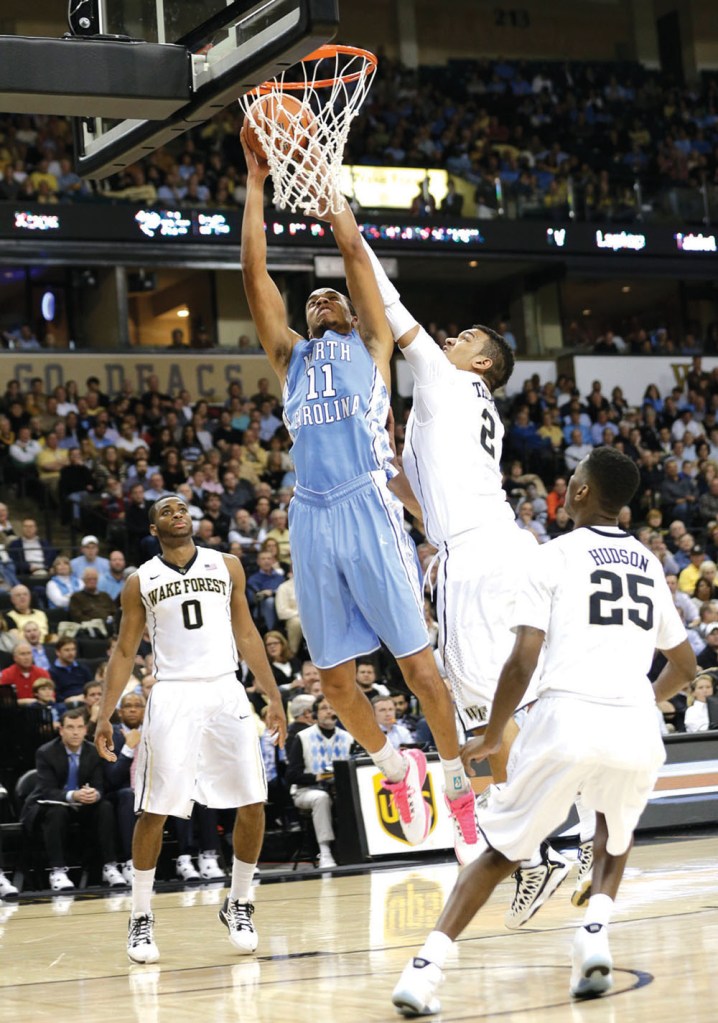 WINSTON-SALEM, N.C. (AP) — North Carolina kept forcing the ball inside and scoring easy baskets to build momentum and the lead. The 15th-ranked Tar Heels need to stay with that formula to keep winning on the road in the Atlantic Coast Conference.

Kennedy Meeks scored 12 of his 16 points after halftime to help North Carolina pull away and beat Wake Forest 87-71 on Wednesday night, giving the Tar Heels their fourth straight win.

Brice Johnson had 19 points as the other half of a two-headed inside attack that helped the Tar Heels (15-4, 5-1 ACC) score 50 points in the paint on the way to a 3-0 record in league road games.

“When the big guys give us those kind of numbers,” UNC coach Roy Williams said, “that makes us pretty doggone good.”

Freshman Justin Jackson added 17 points as the Tar Heels shot 69 percent (18 for 26) after halftime and 60 percent for the game.

The Tar Heels led 40-34 at halftime, but Meeks scored three straight baskets to push the lead to double digits and put UNC in firm control.

“I feel like we were all executing,” Meeks said. “I feel like it all started with setting screens for each other and getting each other open. And everybody who has the ball, just look for the easy play.”

That meant continuously feeding Meeks and Johnson in the post.

“They were running their offense,” Wake Forest forward Devin Thomas said. “They were getting the ball wherever they wanted and they were shooting uncontested shots.”

Codi Miller-McIntyre scored 20 points to lead the Demon Deacons (9-10, 1-5), who played tough in losses to highly ranked Duke and Louisville here this month.

But after weeks of clear progress under first-year coach Danny Manning, they took a big step back against the Tar Heels.

Wake Forest shot 40 percent and couldn’t keep up after halftime, trailing by as many as 18 midway through the second half.

“There’s no science to it,” Manning said. “Guard your damn man.”

The Tar Heels were coming off Sunday’s sluggish home win against Virginia Tech in a performance that irked Williams so much he made his team practice the next night instead of having Monday off.

His team at least responded with a sharper performance despite losing freshman guard Theo Pinson to a foot injury and getting into some foul trouble early in the second half that required UNC to play zone defense.

The Tar Heels scored on 12 of 16 possessions after halftime to break the game open.

North Carolina: Pinson exited with a bruised left foot with 7:52 left in the opening half. The team said he will be evaluated Thursday. … UNC has won nine of 10 since losing at top-ranked Kentucky, the only loss coming by a point against now-No. 8 Notre Dame.

Wake Forest: The Demon Deacons finished with a 13-7 advantage on the offensive glass, though that led to only a 13-10 edge in second-chance points. … Thomas had 12 points and 12 rebounds. … It was Wake Forest’s second-worst loss of the season behind an 83-53 defeat at Arkansas in November.

Jackson followed his 16 points against the Hokies by going 6 for 8 on Wednesday for the best two-game production of his young career.

“I’m feeling more and more comfortable,” Jackson said. “But I’m not satisfied. I’ve got to keep on getting better and putting in extra work and just try every day to go out and become a better basketball player.”

Wake Forest is allowing ACC opponents to shoot 49 percent this season, with the Tar Heels’ total being a season-worst defensive performance.

NBA: Hornets survive at The Hive