Camera to classroom: Teacher of the year finds her place at school 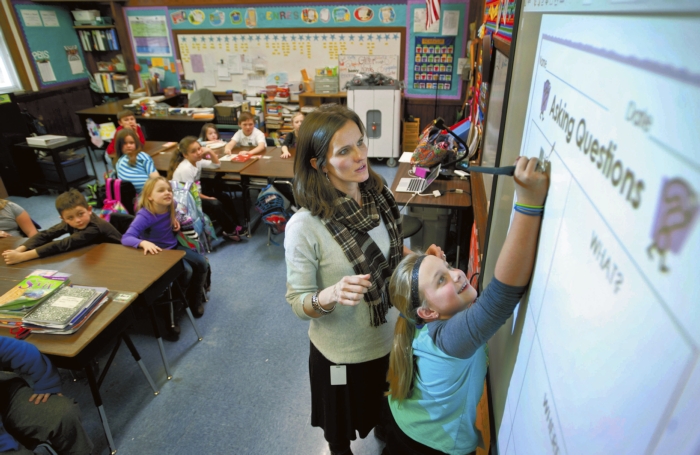 Cassie Thompson watches as second-grader Eleni Miller writes on the projected worksheet during a workshop at Morgan Elementary, one of the schools suggested for closure under a consultant's plan. JON C. LAKEY / SALISBURY POST

If Rowan-Salisbury’s 2014-15 Teacher of the Year looks familiar to you, you might have seen her on television.

Cassie Thompson hasn’t always been a teacher – she spent three and a half years as a news anchor and reporter in Raleigh and Hazard, Kentucky.

Her interest in news began early – at West Rowan Middle School, to be exact, when she was little Cassie Safrit.

“I helped with the news in middle school,” Thompson said, adding that she was an anchor and reporter for WDOG news.

Thompson said she would do science experiments on the program that was broadcast over closed circuit television throughout the school.

“I wanted to be a reporter,” Thompson said. “I knew in eighth grade.”

Thompson, a Rowan County native, attended Ithaca College in upstate New York after graduating from West Rowan High School. She found out about the college when she took the SAT and expressed interest in broadcast journalism.

“They had a really well-known broadcast journalism program,” Thompson said.

She visited the college and decided to attend when she received the Park Scholarship – a full ride for broadcast journalism.

Thompson initially wanted to be a sports reporter, but realized she wanted to do more in-depth reporting.

After graduation, she came back home to Salisbury and started applying for jobs.

When she didn’t find a job immediately, Thompson’s former principal, Henry Kluttz, offered her a job as a teacher’s assistant.

“I ended up at Hanford-Dole as a TA in third grade,” she said.

Kluttz tried to convince Thompson to give up her dreams of becoming a broadcast journalist in order to become a teacher. A few months later, however, she was offered and took a job as a reporter and co-anchor in Hazard.

In Kentucky, Thompson often ran what she calls “a one-woman show.” She would shoot, report and edit all her own stories.

After about two years, Thompson took a job as a weekend anchor and a reporter during the week with News 14 in Raleigh.

“I was homesick,” she said.

“It should have been my dream job,” Thompson said. Raleigh was a mere two hours from home and a much bigger market than Hazard.

During that time, Thompson began volunteering at the Raleigh Rescue Mission with children in their preschool, and volunteering quickly became the highlight of each week.

She thought that if volunteering was the best part of her week, something wasn’t right.

So, after a year and a half and a lot of prayer, Thompson quit her job at News 14 and moved home to Salisbury.

When she first moved back, she met with Kluttz to figure out the best way to change careers.

“I might have to say you told me so,” Thompson remembers telling him. She also had her mother as a role model.  Pam Safrit enjoyed a long career at Hurley Elementary School.

Thompson enrolled at the University of North Carolina at Charlotte to get her teaching certificate.

“I was just chomping at the bit,” she said. “I was ready to be in the classroom.”

“I was frustrated because I needed the certification,” Thompson added.

While she was at UNC-Charlotte, a first-grade teaching position opened up at Woodleaf Elementary School. Thompson applied, but was rejected.

At the time, they had stopped hiring lateral entry teachers, she said.

After Thompson graduated, the same position opened up. She applied again, and this time, she got the job.

“I wanted to teach kindergarten but I fell in love with first grade when I started teaching,” she said.

She spent four years teaching first grade at Woodleaf Elementary School, and last year she was named teacher of the year not just for her school, but for the entire school district.

“I was fine in the classroom,” she said, but her principal suggested she apply for the position.

“Reading and writing – those are my loves,” she said, adding that her strengths in teaching those subjects allow her to impact more students.

“I have to have a broad picture,” she said.

“I like to dig,” she said, adding that she enjoys finding solutions for classroom problems.

Her research skills are just one of the things she took away from her career in journalism.

“The number one way it’s helped is flexibility,” she said. “The way your day ends is not the way you expected it to when your day started.”