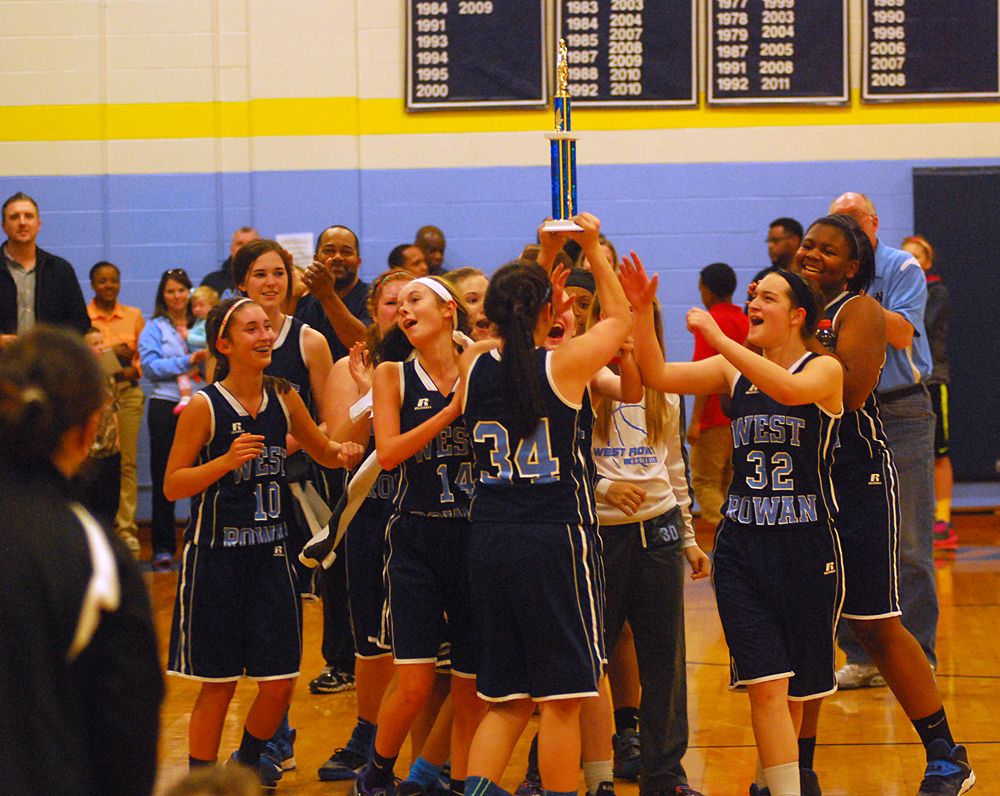 Adam Houston/The Salisbury Post The West Rowan Middle Bulldogs are all smiles after winning the Rowan County Middle School Conference Tournament championship on Thursday. The Bulldogs defeated the Corriher-Lipe Yellow Jackets 40-31 after being down 10 at the start of the fourth quarter.

His Bulldogs promptly went out and got killed in the third quarter by Corriher-Lipe phenom Janiya Downs. But the fourth quarter belonged to Berger’s point guard Chantal Robinson, and the Bulldogs rallied from 10 points down to beat Corriher-Lipe 40-31 in the Rowan County Middle School Conference championship game.

“We lost that third quarter, but there was no doubt in the girls’ minds they could still win the fourth,” Berger said. “And then our shots started to fall.”

Robinson scored 13 of her 21 points in the fourth quarter.

The fourth-seeded Bulldogs, 7-7 in the regular season, completed an unexpected run to the championship, including a semifinal upset of top-seeded and previously unbeaten Knox.

“We’ve been through a lot this year, but it was a good group of girls that stuck together and played together,” Berger said. “When we decided to have fun, win or lose, then the wins started to come.”

Downs should be a tremendous high school player. She’s not only tall,  she’s a driver, she’s a shooter, she’s Corriher-Lipe’s ballhandler and she’s the team’s best defender. When Downs fouled out with 1:40 left, there was a roar from West Rowan fans. They knew it was over.

Downs got Corriher-Lipe off to a 4-0 lead, but guard Hannah Pratt made a shot to get West Rowan started.

Payton Holt keyed a determined West Rowan defense that limited Downs to eight points in the first half, and the Bulldogs took an 11-8 lead to the break.

But Downs got hot in the third quarter, scoring 18 of her team’s 19 points. She made three 3-pointers in the quarter over swarming defenders, including one at the horn for a 27-17 Corriher-Lipe lead.

“Guarding Downs is like trying to guard Michael Jordan,” Berger said. “You just hope she misses, and then you try to get the rebound.”

There were plenty of rebounds. Kia Pharr grabbed 13 of them for the Bulldogs (10-7), and Morgan Owen had 10. Downs had 14 boards for the third-seeded Yellow Jackets (13-4), who beat No. 2 Mooresville in the semis.

Down 10 starting the fourth quarter, the Bulldogs needed a lift, and Pharr made the biggest bucket of the game, banking in a putback. Then Robinson took over. She made layups and knocked down free throws. Then Pharr hit two free throws and Robinson hit two more. That made it a 16-0 run by the Bulldogs for a 33-27 lead.

Downs hit a 3-pointer for the Yellow Jackets with 2:25 left, but she fouled out not longer after that, and Bulldogs, both on the floor and on the bench, started jumping around with excitement.

“When we had the lead, I kept telling the girls to slow down, but we just didn’t,” said Corriher-Lipe coach Donnie Bell, whose group won the seventh-grade title a year ago. “Give all the credit to West Rowan. They’ve got a good team, they always play hard, and they won a hard-fought ballgame.”