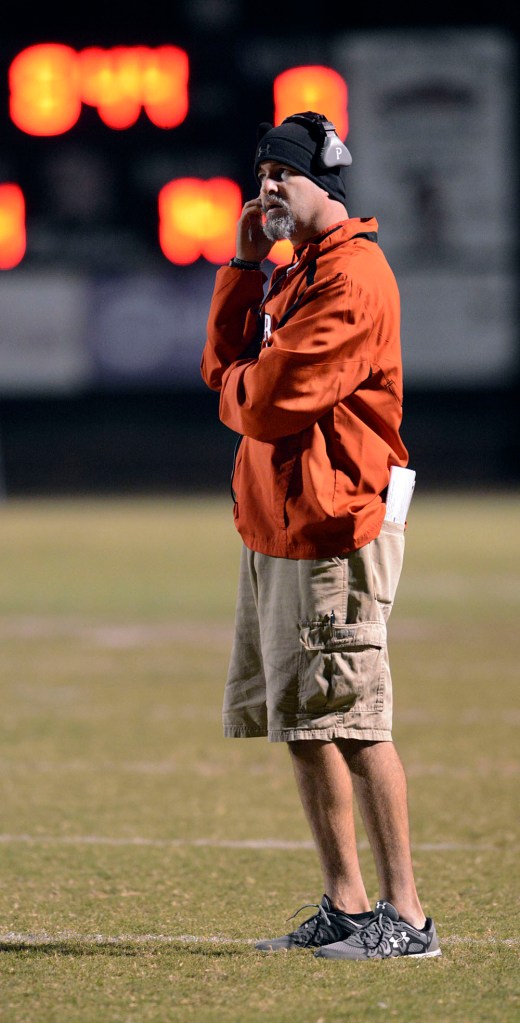 File photo by Wayne Hinshaw/For The Salisbury Post Jason Rollins stands on the sidelines during South Rowan’s 20-7 loss to Central Davidson on Oct. 31, 2014. Rolllins resigned as the Radiers’ head coach on Wednesday. The Raiders went 28-71 with Rollins at the helm.

LANDIS — Jason Rollins was a soldier who fought the good fight a long time.

South Rowan principal Kelly Withers and athletic director Angie Chrismon were on hand, as Rollins, fresh from speaking to his staff for the last time, announced his resignation in the front office.

“He’s stepping down as football coach, but he’s a phenomenal social studies teacher, and we’re excited he’s staying on at South Rowan in the classroom,” Withers said. “He’s a great ambassador for South Rowan.”

Withers said the coaching opening will be posted immediately.

South Rowan makes football coaching changes reluctantly. The school opened in 1961 when Landis and China Grove highs were consolidated, and Rollins is only the fifth head football coach in school history. Lope Linder coached 10 seasons, Reid Bradshaw was at the helm for 12, Larry Deal led the Raiders for 12, and Rick Vanhoy was in charge for 11 before Rollins was hired.

“Great men and great role models, every one of them,  and it’s my honor to be on any list with them,” Rollins said. “I wish I had their record as far as wins and losses.”

Football head coaches don’t tend to last long or stay in one place long. Only 12 men in Rowan County history served as head coaches for more seasons than Rollins, who is tied for 19th on the county’s all-time wins list.

“Being a high school head coach is a very difficult job,” Rollins said. “I’ve got nothing but praise for my staff and how much work they’ve put in, and I’ve got so much praise for our kids because they fought to the bitter end every game. But when it’s time to make a change, it’s time. Change can be a good thing.”

The biggest positive change for Rollins will be more time with his wife, Stacey, who hasn’t seen a lot of him during the fall months. His children have grown up during his head-coaching tenure. His daughter, Madison, is a student at South Rowan now. Rollins’ son, Andrew, was a toddler when he became head coach. Now he’s a sixth-grader.

“When you’re the head coach, it’s not like you can leave to go watch your son’s game,” Rollins said. “Now I can see him play.”

Rollins is a graduate of Belmont South Point and UNC Charlotte. He arrived at South Rowan in 1999 as the outside linebackers coach on a staff with Vanhoy as head coach and Deal as offensive line coach.

“It was a blessing to learn from two great coaches,” Rollins said. “It was a great opportunity. I just tried to take what they taught me and carry it forward and build on it.”

Rollins left South Rowan for one season (2005), moving over to East Rowan as the defensive coordinator for his friend Jim Crawley, who had been hired as head coach.

Carson opened in fall of 2006, a handful of miles away, drastically reducing South Rowan’s enrollment and football roster. The Raiders were still in the 4A Central Piedmont Conference that season.

After six straight lopsided losses, the Raiders went on the road and beat R.J. Reynolds 29-14 at Deaton-Thompson Stadium.

“I’ve thought about that Reynolds game a lot in the last few days,” Rollins said. “You don’t forget the first win.”

The Raiders won three times that season, including a 3-0 victory against East Rowan.

From 2007-2012, South Rowan competed in the 3A North Piedmont Conference, where the bullies usually were West Rowan (four straight trips to the 3A championship game in that span) and Statesville.

South Rowan had one strong team in that stretch, the 2009 club that went 9-3. The Raiders beat A.L. Brown 21-19 that season, their only victory over the Wonders in the last 11 meetings.

“I should’ve run for mayor after that game,” Rollins said with a laugh.

Rollins spent his last two seasons in the 3A South Piedmont Conference, with the Raiders competing against Cabarrus schools such as Hickory Ridge, Cox Mill and Concord, in a rugged league. The Raiders are the SPC’s smallest school with under 1,000 students. That’s contributed to an uphill fight in football.

“The staff has worked hard to get the kids out and get our numbers up,” Rollins said. “But it has been a challenge.”

South Rowan didn’t win at all in 2013. In 2014, with a senior-heavy team, the Raiders won three games, including two in the SPC. Rollins won his final game, when the Raiders stunned East Rowan. Not many people get to win their last one.

“My wife and the staff have both mentioned that,” Rollins said.

Through all of the the untimely injuries and disappointments, Rollins stayed positive.

Rollins always talked about the big picture, about building players into champions who could face the obstacles in life that come after the cheers of high school football have grown silent.

“We’ve been so lucky to have Jason,” Chrismon said. “He’s passed on a lot of good qualities to his players.”

NOTES: …With Robinson coming down from 4A to the SPC next season, the Raiders will play nine SPC games. The two non-conference games will be A.L. Brown and Salisbury.