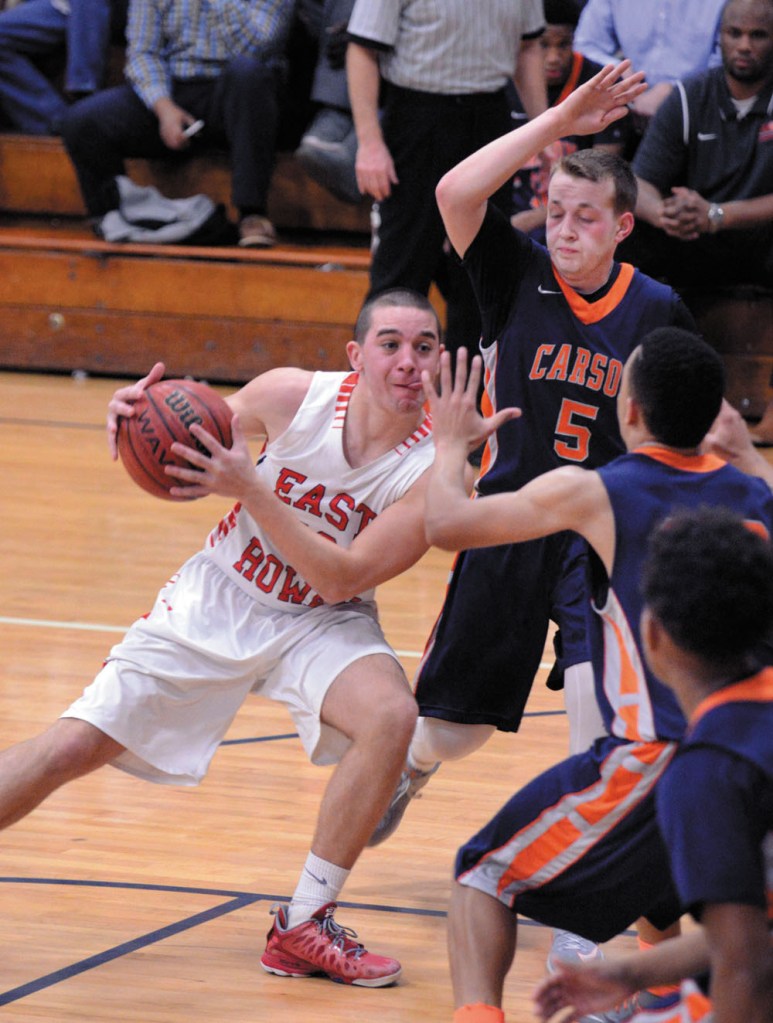 East's Seth Wyrick #13 leans toward the basket. photo by Wayne Hinshaw, for the Salisbury Post

GRANITE QUARRY — While Coach K has 999 wins, Carson boys coach Brian Perry  also is closing in on a milestone.

Perry, the coach since Carson opened in 2006,  logged his 99th victory on Tuesday when the Cougars pounded East Rowan 49-29 on the road.

Carson (8-9, 5-4 SPC) won mostly with stifling defense. The Cougars were playing the 224th game in school history, and this was the fewest points they’ve ever allowed. The previous record came in a 70-30 victory against West Davidson in the 2009-10 season.

“Stay engaged, stay engaged!” Perry yelled at the Cougars most of the night, and his rejuvenated team, which had dropped six straight not long ago, did stay engaged. Carson produced its third straight SPC victory.

“East missed some shots I’m sure they normally make,” Perry said. “But I did like our defensive energy, and I thought we did a pretty good job rebounding. They didn’t get a lot of second shots.”

“Carson did a great job of taking the 3-point line away from us,” East Rowan coach Trey Lebdetter said. “They made our bigs take a lot of shots.”

East Rowan played without senior Samuel Wyrick (ankle), and while he doesn’t score much, he’s the Mustangs toughest defender and provides a lot of  veteran leadership.

“I’m sure they missed him,” Perry said. “He’s that guy who speaks up in the huddle when things aren’t going well for them, and he’s that guy who’s going to guard whoever has a hot hand.”

There was a shortage of hot hands.

Neither team had a scorer in double figures. Jamarius Hairston, Jacob Raper and Jonathan Rucker scored nine each for the Cougars, while Bryson Goodlett, Tay Davis and Austin Love had seven each for the Mustangs.

“Our defense was fine,” Ledbetter said. “When you hold someone to 49, you really should have a shot to win, but we didn’t have a shot in this one — almost from the jump. We’ve got to go back to the drawing board and fix some things with our offense.”

Hairston and Raper had first-quarter 3-pointers as the Cougars took a 17-10 lead. Hairston, a long-armed freshman, had three second-quarter buckets as the Cougars pushed ahead 28-18 at halftime.

“Everyone was talking  on defense and everyone was doing their job,” said Carson post man Ryan Bearden, who keyed Carson’s domination of the boards. “We had no letdowns.”

Carson got another 3-pointer from Raper and outscored the Mustangs 12-4 in the third quarter to pull away.

“Our confidence is up and our intensity is up,” Rucker said. “Winning against Cox Mill really boosted our confidence, and now we’ve won three in a row. I know some people doubted we could defend East (the Mustangs won the first meeting 62-59), but we proved our critics wrong tonight. We’re going to be a different team the second time through this league.”